Division of the stakes between Udinese and Atalanta, the recovery ends 1-1

Bianconeri took the lead with Pereyra's lightning goal after not even a minute. Orobic draw by Muriel in the final of the first half. Gasperini's Nerazzurri hook Juventus to 33 points but they have one game less, the Friulians go up to 17 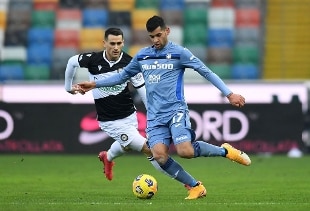 20 January 2021Two goals in the first half and at the 'Dacia Arena' the X sign comes out. The recovery of the tenth day of Serie A between Udinese Atalanta ends 1-1.

Last 6 December the game was not played due to the impracticability of the field.

Gasperini's team has not been the steamroller seen on the pitch in the last few days.

With the point in Friuli, the orobics rise to 33 points, like Juventus which, however, has yet to recover the match not played with Napoli.

Gotti's men continue their championship stingy with satisfactions: only 3 points collected in the last seven games, the ranking shows 17, only 4 more than the third last.

In Gotti's 3-5-2 the director is Arslan, with De Paul and Mandragora in midfield and Larsen and Zeegelaar larchi, forward Pereyra and Lasagna.

Turnover for Gasperini who makes Iličić and Zapata rest and forward relies on Malinovskyi and Miranchuk to support Muriel.

23 ”are enough for the hosts to score with Pereyra who does everything alone and beats Gollini from the outside.

Atalanta bases their game but fails to make themselves too dangerous, until 35 'when Maehle commits Musso.

At 40 'the Juventus goalkeeper is repeated on one-two Muriel-Toloi.

At 42 'Gollini risks the mess on Pereyra, but for Calvarese everything is regular.

The Nerazzurri draw with Muriel in the 44th minute: the Colombian receives the ball from Pessina, wins a contrast with Rodrigo and makes Musso dry for his 11th personal success.

Shooting at an even slower pace, opportunities are running out.

Gasperini at 58 'inserts Iličić and Zapata for Mirnachuk and Muriel.

Thrill in the 86th minute when, on Larsen's cross, Zeegelaar bags but committing a foul on Gollini, Calvarese whistles and does not validate the goal.