Threatened to spill blood ... arrest an official in connection with the events in Congress and a presidential pardon for those involved in them awaits

American media reported that the FBI has arrested a New Mexico official near the Congress building in Washington, DC, in connection with the congressional storming, as part of a campaign of arrests of those involved in the storming. 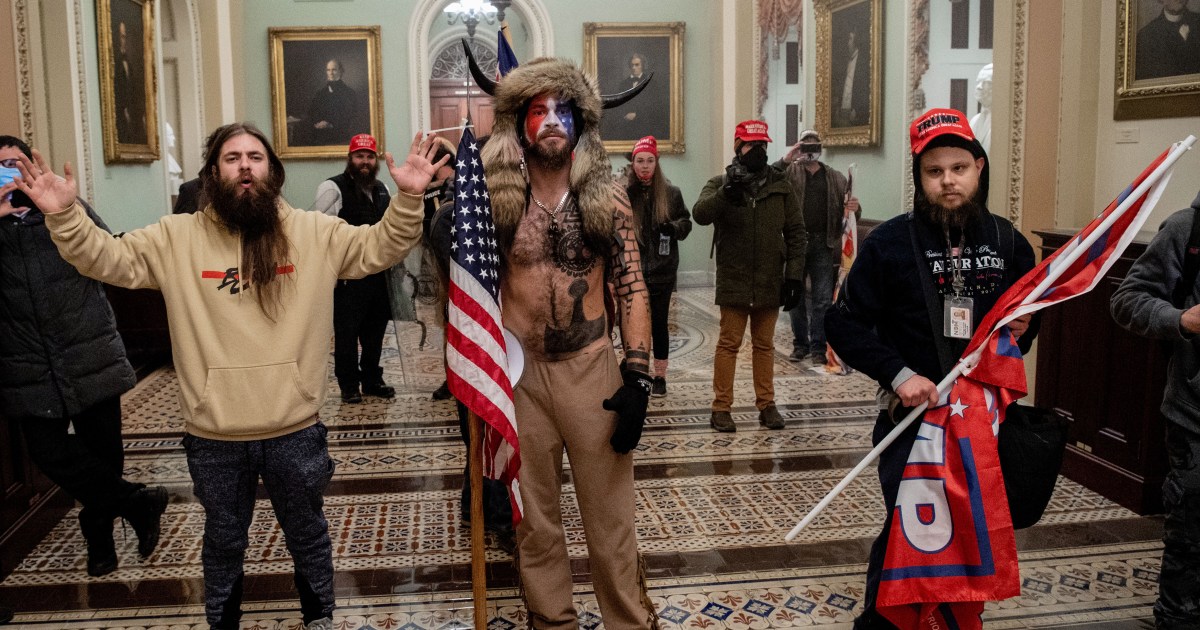 And the media reported that the official is named Coy Griffin, a state commissioner, and has pledged to return to Washington, heavily armed to protest the inauguration of President-elect Joe Biden next Wednesday.

The reporter also mentioned that the US authorities have arrested the person whose image is circulating in the media, wearing a buffalo fur and wearing two horns on his head, and his name is Jake Angley, in addition to other elements, as part of an ongoing campaign of arrests of those involved in the storming of Congress.

The Washington Metropolitan Police had announced earlier that it arrested a young man from Virginia, at dawn on Sunday, near a checkpoint, for possessing a weapon and live ammunition without a license.

Gunmen belonging to the far-right Bugalo movement gathered in front of the Congress building in Lansing, the capital of Michigan, amid intense security deployment.

The security services have strengthened their deployment around the building after calls to protest in front of the building.

The Associated Press reported that the FBI will be examining National Guard forces in Washington, DC, for fear of an internal attack during Biden's inauguration.

The agency quoted officials in the Ministry of Defense that the Pentagon is concerned about an internal attack, or a threat from individuals related to securing the inauguration ceremony, and said that the US Secretary of the Army ordered the military commanders to pay attention to any problem that may occur in the ranks of their forces as the inauguration date approaches.

The US authorities imposed a security cordon on Washington, DC, as part of measures to secure the installation of President-elect Joe Biden.

And the Al-Jazeera correspondent in Washington reported that security authorities closed many neighborhoods and main streets, and deployed thousands of National Guard, police and Secret Service personnel, after the FBI revealed that an investigation had begun into a possible foreign role in supporting and financing the attack on Congress.

Ron Klein, the White House chief of staff in the Biden administration, expressed concern about the security threats that may accompany the inauguration ceremony, but he expressed his confidence in the ability of the security services to secure the ceremony.

Klein said - in an interview with "CNN" - that Biden's transition team is receiving briefings from the current administration on potential threats.

For his part, Republican Senator Lindsey Graham warned of the issuance of an amnesty by President Trump for those who stormed Congress on the 6th of this month, considering it a mistake.

In an interview with Fox News, Graham said that he would attend the inauguration of President-elect Joe Biden.

CNN quoted sources as saying that Trump does not intend to pardon himself, but plans to grant an amnesty to about 100 convicts tomorrow.

She said that a meeting was held at the White House to put the final touches on the list of people who will be included in Trump's pardon, and indicated that a number of his close advisers warned him against granting an amnesty to anyone involved in the events of the congressional storming.