After first announcing the opposite about the violence in Washington, the Justice Department changed its mind 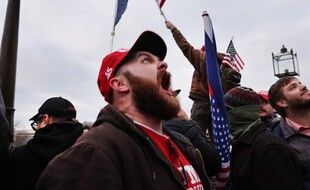 US Department of Justice investigators have so far found no evidence that rioters who attacked the Capitol last week planned to capture and murder elected officials.

In a hearing in Arizona court on Friday into the detention of one of the rioters, Jacob Chansley, a QAnon conspirator, federal prosecutors reconsidered previous accusations that supporters of President Donald Trump were planning to “Capture and assassinate elected officials” during the January 6 attack in Washington.

In a previous testimony in court, prosecutors invoked the murder plan to demand the continued detention of Jacob Chansley, 33, who became famous around the world after being pictured shirtless in a horned shaman's outfit during the riot.

Ariozona prosecutors withdrew their charges on Friday after the Justice Department said despite calls during the attack to capture some elected officials and kill Vice President Mike Pence, no evidence had not been found which shows that such a project was seriously considered.

"There is no direct evidence at this point of the existence of teams to capture and assassinate," (elected officials), Michael Sherwin, the Washington District Attorney General who oversees the investigation into the attack on the Capitol.

In reaction to the January 6 attack, Washington has taken on the appearance of an entrenched camp in recent days with its concrete blocks and barbed wire.

A heavily armed man was arrested on Friday as he sought to pass one of the many checkpoints set up near the Capitol, where President-elect Joe Biden will be sworn in on January 20.

Rioters on the Capitol wanted "to assassinate elected officials", nomination under high security for Joe Biden

Before his suicide, a Frenchman allegedly donated $ 500,000 in bitcoins to the ultra-right American