Pence pledges to ensure a safe transfer of power to Biden

US Vice President Mike Pence pledged to respect US history and ensure a safe transfer of power to President-elect Joe Biden, eight days after supporters of outgoing President Donald Trump surrounded Congress, while the US prosecutor said the rioters 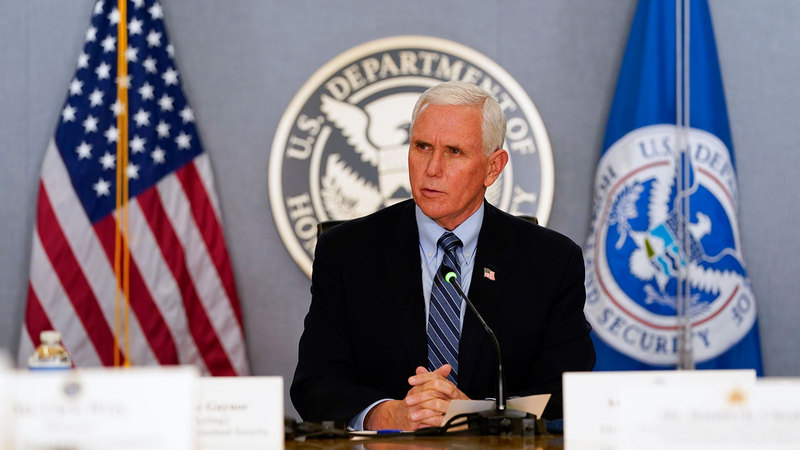 Pence pledges to ensure a safe transfer of power to Biden

Pence confirms that Biden and Vice President Camilla will take the oath in a way that honors the American people.

US Vice President Mike Pence pledged to respect US history and ensure a safe transfer of power to President-elect Joe Biden, eight days after supporters of outgoing President Donald Trump surrounded Congress, while the US prosecutor said that rioters were aiming to “capture” And the assassination of “elected officials.

In detail, the US Vice President’s pledge to ensure the safe transfer of power to President-elect Joe Biden came within statements he made before a security statement at the headquarters of the Federal Emergency Management Agency, and during a meeting with National Guard forces guarding the Capitol.

Pence was one of the top US officials who had been forced into hiding during last week's attack.

“We all lived that day, January 6, and as President Trump made clear, Thursday, we are committed to an orderly transition and a secure inauguration,” Pence said during his first public appearance since the attack.

The American people deserve no less. ”

He said that Biden and Vice President Camilla Harris will be sworn in on January 20 "in a way that is consistent with our history and traditions, and in a way that honors the American people and the United States."

Trump, who does not intend to attend the inauguration ceremony, on Wednesday, became the first president in US history to back the House of Representatives impeachment twice, as 10 of his fellow Republicans joined Democrats in the House, accusing him of inciting a revolt in reference to the Capitol attack.

Pence met dozens of guards outside the Capitol and thanked them for providing security "at such an important time in the lives of our people."

Pence has long been a Trump aide most loyal to Trump, but angered the president by refusing to block Congressional ratification of Biden's victory with the largest number of electoral college votes.

During the congressional attack, some Trump supporters discussed the assassination of Pence, calling him a traitor.

Trump and Pence sought to mend the rift during a meeting in the Oval Office on Monday, but aides said they were deeply disappointed by the way Trump dealt with his vice president.

On the other hand, the Biden administration, when he takes office next week, will have to quickly negotiate with Russia to salvage the new strategic arms reduction treaty (New START).

It is the last major arms reduction treaty between the two former Cold War rivals.

As the deadline approaches, Moscow and Washington will have to make concessions and put aside the regrettable state of their relations, amid disputes over most international issues, and accusations of election interference, espionage and cyberattacks.

On the other hand, the US federal prosecution presented a new grim picture of the blockade of the Congress building, saying in a memorandum submitted to the court that the rioters supporting President Donald Trump intended to "capture and assassinate elected officials."

In the memorandum, the prosecution requested a detention order for Jacob Chansley, an Arizona resident and conspiracy theorist, whose image has been widely circulated with fur hanging over his head with two horns, standing at Mike Pence's Senate office.

The memo, written by lawyers for the Arizona Department of Justice, went into greater detail about the FBI's investigations into Chansley, revealing that he had left a written note to Pence, warning that "it is just a matter of time ... justice is coming."

"Strong evidence, including the words and actions of Chansley himself on the Capitol, supports the notion that the rioters' intent was to capture and assassinate elected officials of the United States government," the prosecutor said.

This comes at a time when prosecutors and federal agencies began directing more serious accusations related to the violence that occurred, including the Thursday disclosure of cases accusing retired firefighter Robert Sanford of throwing an extinguisher on the head of a policeman, as well as accusing a person named Peter Steger of beating another policeman with an American flag. .

Regarding the Chansley case, the prosecution said that the accusations "include active participation in a rebellion that seeks to overthrow through violence the United States government" and warned that "the insurgency is still in place", while law enforcement agencies are making preparations for the possibility of further demonstrations in Washington and state capitals.

The prosecution also said that Chancilly was a drug addict and mentally impaired, and the likelihood of him running away from justice was strong.

The Justice Department filed more than 80 criminal cases related to the violence in Congress, last week, when Trump supporters stormed the building, ransacked offices, and attacked police, in part.

Execution of the death penalty days before Trump's term ends

On Thursday, the US federal authorities carried out the death sentence for a former drug trafficker accused of a series of murders, and another execution is scheduled to be carried out, five days before Donald Trump leaves the White House.

His last words were directed at the relatives of his victims.

Among the most prominent of what he said: “I would have liked to say before that I am sorry, but I did not know how .. I hope you will find peace.”

Dustin Higgs, a 48-year-old black man convicted of giving orders to kidnap and kill three young women on federal land near Washington in 1996, will face the same fate.

The two men contracted "Covid-19" in December, and the judge decided, on Tuesday, to postpone their execution for weeks.

Russia is hoping for an agreement with the US President-elect on "nuclear armament."