The 33rd Congress of Christian Democrats is awaited with suspense. It's hard to say which of the three candidates will be in the lead. Beyond the presidency of the party, it is the race for the chanc ... 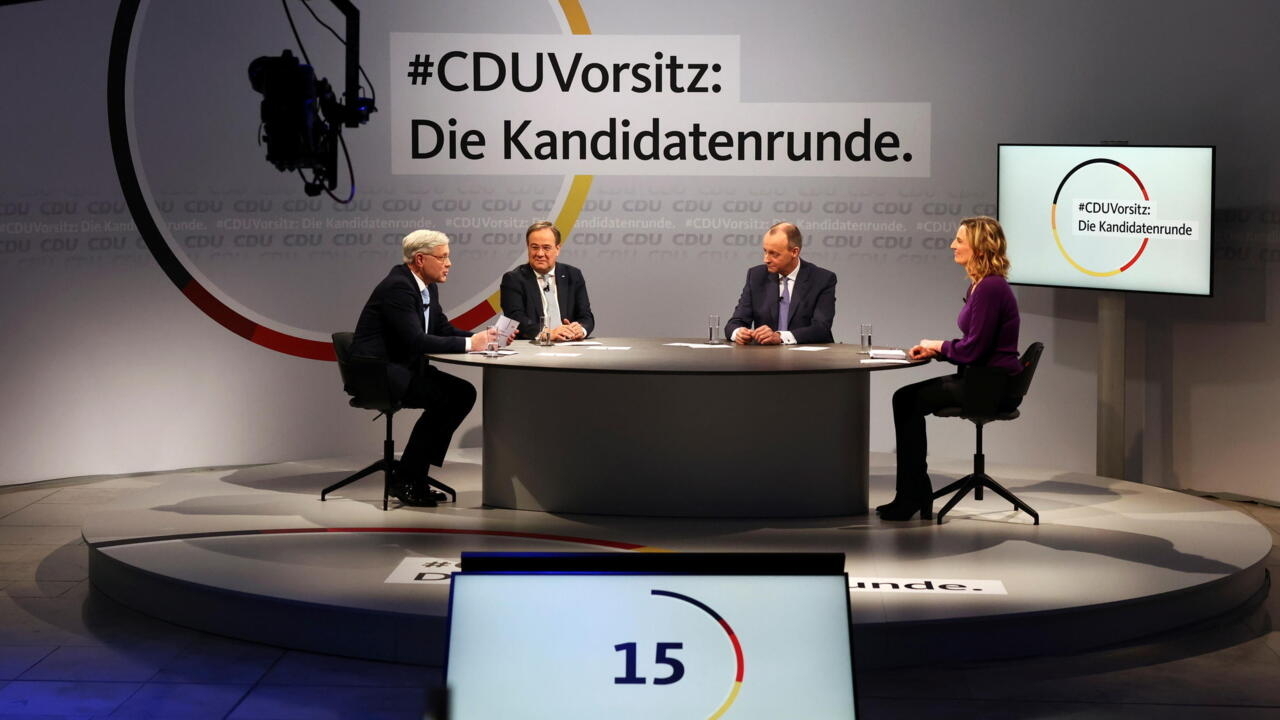 The 33rd Congress of Christian Democrats is awaited with suspense.

It's hard to say which of the three candidates will be in the lead.

Beyond the party presidency, it is the race for the chancellery that is at stake before Angela Merkel's departure from power in the fall.

illustrates the stake represented for the contenders for the presidency of the CDU: to succeed perhaps in the autumn, after sixteen years of reign, to Angela Merkel.

The Chancellor already left the party leadership at the end of 2018. Weakened after defeats of the CDU in regional elections and persistent tensions with the sister party, the Bavarian CSU, on migration policy, Angela Merkel had decided to give up, after 18-year-old leader of the Christian Democratic Union and announced that she would not stand for a fifth term in the general election in fall 2021.

The runner-up to the Chancellor,

, already general secretary of the CDU, was elected head of the party in December 2018. At the time, it seemed clear that AKK, as it is called, would lead the her party's campaign for this year's general election with a solid chance of becoming chancellor.

But history wanted it otherwise.

AKK was narrowly elected against the conservative Friedrich Merz.

To his credit is the organization of many discussions within a party that lacked.

Angela Merkel's migration policy with the reception of many refugees had in particular aroused internal criticism.

Persistent tensions with the Bavarian sister party CSU have disappeared.

But Annegret Kramp-Karrenbauer made mistakes, lacked support within the party and struggled to win against a chancellor who remained omnipresent.

announces that she will not run for the chancellery and resigns from the party leadership.

The election in Thuringia of a regional president with the votes of his party and the far-right movement AfD provoked a major crisis just before.

AKK failed to subdue its troops there.

His authority was a little more scratched.

Quickly, the race for succession opened and three contenders came out of the woods.

But the congress scheduled for April had to be postponed several times because of the Covid-19 pandemic.

It is therefore being held this weekend and for the first time on the internet.

The 1,001 delegates will follow the speeches of the applicants in front of their computers and vote online.

wrote on its front page this Friday, January 15,

it will be a man

A safe prognosis since no woman is a candidate.

The three candidates in the running are all from the North Rhine Westphalia region, Catholics and fathers of three children.

There too a break with Angela Merkel, the daughter of a Protestant pastor who grew up in the former GDR.

Friedrich Merz, the furthest from Merkel

Friedrich Merz is the candidate who would constitute the most stark contrast to the Chancellor.

He was dismissed by the one who was the new president of the party at the time and who replaced him in 2002 at the head of the CDU / CSU parliamentary group in the Bundestag.

Friedrich Merz had left politics in 2009 to retrain in business.

At the 2018 party convention, he was a candidate against Annegret Kramp-Karrenbauer, also with the desire to embody a break with the Merkel heritage.

With this success, he therefore unsurprisingly announced his candidacy after AKK's resignation almost a year ago.

Friedrich Merz embodies a CDU that is more conservative on questions of society, immigration or security and more liberal on economic issues.

He enjoys clear support within the party, but he has made mistakes in recent months.

Strategically, it would allow its more right-wing positioning to increase the ideological differences between right and left more than today.

This can revitalize the very consensual German political life, especially when a grand coalition is ruling the country.

But Friedrich Merz's rejection can harm the CDU in elections by causing it to lose voters in the center who might be tempted by the Greens or the Liberal Party.

This undoubtedly explains why the candidate has, lately, praised the merits of Angela Merkel so as not to be too perceived as the one who questions his heritage at a time when the Chancellor enjoys an extraordinary popularity.

The second candidate, Armin Laschet, is synonymous with continuity.

The Minister-President of North Rhine Westphalia, the largest region in Germany, is a lifelong supporter of the Chancellor, whom he supported even when she was in difficulty in particular because of her migration policy.

Armin Laschet, now vice-president of the CDU, would continue the course at the Angela Merkel center.

He started speaking with the Greens when they were still frowned upon at a very young age, and now governs his region with the Liberals.

This flexibility and his sense of consensus are also assets.

But this “Merkelian” connotation can also harm him if he is too perceived as a clone of the defending champion.

To counteract this image,

decided to team up with Minister of Health Jens Spahn.

The latter, twenty years younger, has in the past often criticized Angela Merkel, particularly on migration issues.

This alliance with a man who has become very popular since the Covid-19 pandemic and who is promised a bright political future, initially gave Armin Laschet a bonus.

But criticism of the overly erratic way he allegedly handled the pandemic hurt him.

His popularity remains disappointing both within the party and among the Germans.

The delegates of the congress will undoubtedly think of it as later, when a candidate for the chancellery will have to be chosen.

The chairman of the Foreign Affairs Committee in the Bundestag is recognized for his competence in his field but has no mandate other than that of deputy and is not an apparatchik of the CDU with troops behind him.

Norbert Röttgen was a rising party figure a decade ago, a brilliant head with a promising political future.

He was Angela Merkel's environment minister from 2009 to 2012. But his unsuccessful candidacy in North Rhine Westphalia and his clumsy handling of the consequences of his defeat hurt him.

The Chancellor thanked him.

Like Friedrich Merz, he is one of those officials sidelined by Angela Merkel.

But Norbert Röttgen does not have a label of revenge.

And unlike Friedrich Merz, in recent months he has forged an image of a modernizer supporting a CDU more in tune with society.

The outsider has lost that label and could benefit from the support of delegates critical of the Merkel legacy but the abrupt style of a Friedrich Merz put off.

Another advantage of Norbert Röttgen: unlike his competitors, his thirst for power is limited.

He was not lent before the congress of ambition to be a candidate for the chancellery.

Some might be tempted to choose it to save time.

Because the K question - for Kanzler or chancellor - is on everyone's mind eight months before the general elections.

Whoever takes the Christian Democratic troops into battle has every chance of becoming Angela Merkel's successor.

Tradition has it that this decision is taken jointly by the two conservative parties.

The CDU always has the hand at first and tradition dictates that the president is appointed.

But this year, everything seems possible.

For the first time, a head of government - Angela Merkel - is stepping down voluntarily.

As with the appointment of the new president of the CDU, none of the three contenders immediately stands out as a candidate for the chancellery.

If the new party boss wins by a hair, if his authority remains fragile and his poll results mediocre, if two important regional elections in mid-March turn out badly for the CDU, others could do well .

could take his chance.

For months, polls have shown that he is perceived as the best Conservative candidate for chancellery among supporters of the German right and among the general public.

If he were to be chosen, it would be the third time since 1949 that a Bavarian Christian Socialist had worn the colors of the German right.

The previous two ended in defeat.

What will remain of Angela Merkel in 2021, after 16 years at the head of Germany?