A team including experts from the World Health Organization (WHO) arrived in Wuhan yesterday to investigate the origin of the emerging corona virus that causes the (Covid-19) pandemic, more than a year after its appearance, noting that two members of the team were unable to board the plane in Singapore, after it was proven. Tests that they are carrying AG 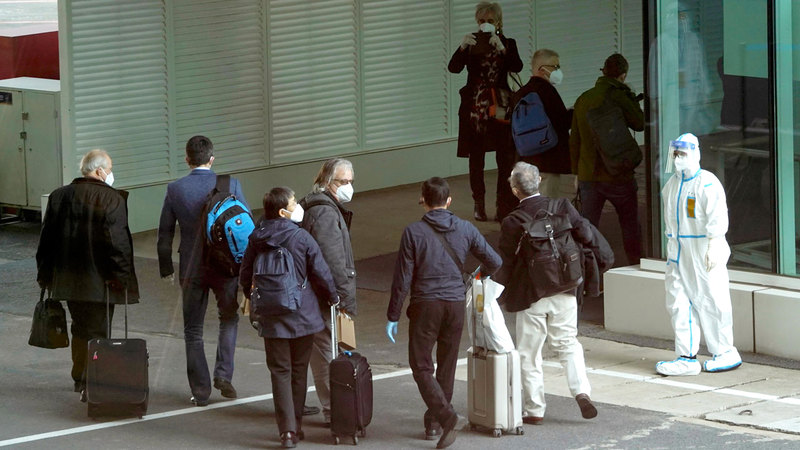 A team including experts from the World Health Organization (WHO) upon their arrival in Wuhan.

A team including experts from the World Health Organization (WHO) arrived in Wuhan yesterday to investigate the origin of the emerging corona virus that causes the (Covid-19) pandemic, more than a year after its appearance, noting that two members of the team were unable to board the plane in Singapore, after it was proven. The tests that they carry antibodies to the virus, while a British study concluded that those infected with "Covid-19" are most likely to have immunity from the disease for at least five months.

The international team, consisting of 13 experts assigned to the much-delayed mission, was greeted by Chinese officials in protective clothing, who took samples of the team members from throat swabs upon arrival, and were rushed to a hotel, where they had to spend two weeks in stone before starting work.

The virus was detected for the first time in the city of Wuhan in central China in late 2019, and its spread has accelerated around the world, killing nearly two million people so far, infecting tens of millions, and causing severe damage to the global economy.

The Health Organization says that finding out how the virus passed from animals to humans is necessary to prevent future outbreaks of epidemics.

However, despite months of arduous negotiations over their mission, the team was denied access last week, in an indication of the political sensitivity of an issue that witnessed the exchange of accusations between countries, speculation and denial.

The organization said yesterday that while most of the team arrived, two of them were not allowed to board the plane from Singapore to Wuhan, after tests proved that they carry antibodies to the virus, in a new obstacle in the long journey of experts to China.

The organization said in a tweet that all members of the team "performed several PCR tests in their countries, and tests for antibodies to (Covid-19), which came negative before travel."

The visit comes at a time when China is seeking to eliminate new hotbeds of HIV infections.

And imposed isolation measures affecting more than 20 million people in northern China, and declared a state of emergency in one of the provinces, while the country announced the first death from "Covid-19" in eight months.

Foci of injuries are still limited, compared to other countries that are struggling with an increase in the number of injuries and deaths.

But the first death from the virus in China in several months, for a woman suffering from diseases in Hebei Province, has raised fear throughout China.

The hashtag "New death from the virus in Hebei" received more than 270 million views on the Chinese social networking platform Weibo, yesterday.

Before that, the last death declared on the Chinese mainland was in May last year, and the official death toll now stands at 4,635.

Beijing is seeking to prevent the spread of the pandemic before the Lunar New Year celebrations, the occasion that the Chinese celebrate next month, and during which hundreds of millions of people are expected to move around the country.

With the detection of new infections, Heilongjiang Province declared a "state of emergency" yesterday, and asked the population of 37.5 million people not to leave the province, unless it is absolutely necessary.

China is preparing for the expert group mission, which will shed light on its own narrative on the virus.

Beijing is feeding the notion that the pandemic first emerged outside its borders, and prefers to focus on its relatively quick control of the health crisis.

The WHO did its best to remove the political burden associated with the mission of its team.

The head of the mission, Peter bin Mubarak, said that the group will start with compulsory stone in a hotel.

"After two weeks, we will be able to travel and meet our Chinese counterparts in person, and go to the various sites that we will want to visit," he added.

He warned that "it may be a very long journey before we get a full understanding of what happened."

Beijing says that although Wuhan is the place where it detected the first hotspots of infections, it is not necessarily the origin of the virus.

"I don't think we will have clear answers after this initial mission, but we will be on the way to that," Peter said.

"The idea is to present a number of studies that were designed and decided months ago, in order to better understand what happened," he said.

This comes at a time when a British study, conducted on health care workers, found that those infected with "Covid-19" were likely to have immunity from the disease for at least five months, but there is evidence that those who carry antibodies may carry Virus and spread it.

And the preliminary results reached by scientists at the Public Health Authority in England showed that it is rare for the virus to be infected by antibody carriers as a result of a previous infection, as the second infection occurred in only 44 of the 6,614 people who were infected with the virus and were included in the study.

But experts warned that the results mean that those who contracted the disease in the first wave of the pandemic in the first months of 2020 may now be at risk of contracting it again.

They also warned that those who have "natural immunity" acquired as a result of infection may carry the virus in the nose and throat, and thus they can spread the infection.

In the same context, Lebanon started, at dawn yesterday, general lockdown measures more stringent than its predecessors, including a complete curfew for about two weeks, in an attempt to limit the high rates of record infections with the emerging coronavirus.

Traffic appeared to be limited in a number of Beirut's streets and suburbs. Commercial establishments, markets and most private companies closed their doors, while users of social media circulated pictures showing a traffic jam at one of Beirut's northern entrances.

Pope Francis and his predecessor, Benedict, receive the vaccine

Yesterday, the Vatican said that Pope Francis and the former Pope of the Vatican, Benedict XVI, received the first dose of the Corona virus vaccine.

Pope Francis (84 years) and former Pope Benedict (93 years) received the vaccine dose, as part of the Vatican vaccination program that began the day before yesterday.

Although both of them are at risk of infection, given their advanced age, Pope Francis may be most at risk due to the removal of part of one of his lungs in his youth, after contracting a disease in his native Argentina.

Vatican City has recorded fewer than 30 cases of coronavirus, most of them among Swiss guards who are staying in shared barracks.

first death from the virus was recorded in China in several months.