The ten major “anti-pornographic and anti-illegal” cases released in 2020, more than 11,000 cases were investigated and handled

China News Service, Beijing, January 13 (Reporter Ying Ni) The National Anti-vice and Anti-illegal Affairs Office announced on the 13th the top ten anti-pornographic and anti-illegal cases in 2020, including the use of live webcasts, diversion, and establishment of obscene websites to spread obscenity Items, production and dissemination of illegal publications, copyright infringement, deletion o 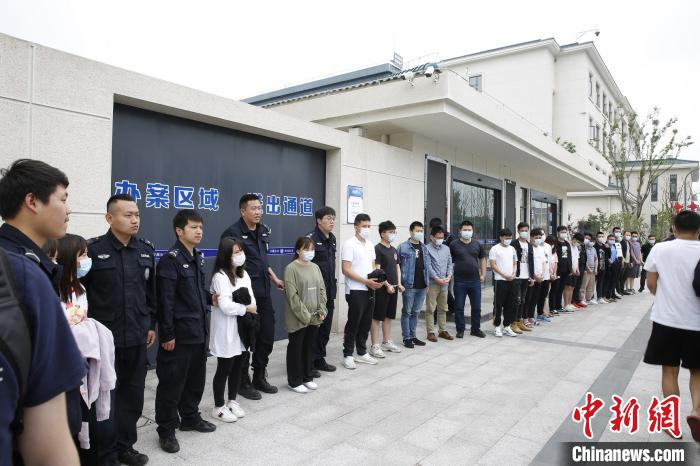 China News Service, Beijing, January 13 (Reporter Ying Ni) The National Anti-vice and Anti-illegal Affairs Office announced on the 13th the top ten anti-pornographic and anti-illegal cases in 2020, including the use of live webcasts, diversion, and establishment of obscene websites to spread obscenity Items, production and dissemination of illegal publications, copyright infringement, deletion of posts by network navy forces, extortion by fake reporters, etc.

According to statistics, in 2020, a total of more than 11,000 "anti-pornographic and illegal" cases were investigated and handled nationwide, including 3,218 criminal cases and more than 5,000 criminal punishments.

1. The "May 04" of Zhaoqing, Guangdong used live webcast to organize an obscene performance case.

At the beginning of 2020, on the basis of investigating and handling an obscene performance case involving minors, the public security organs of Zhaoqing City set up a special class to conduct in-depth investigations on the "Pocket Entertainment" live platform case.

As of December 2020, 112 criminal suspects have been arrested, 112 criminally detained, 81 arrested, 36 minors rescued, and more than 12 million yuan in funds frozen and seized in 15 provinces and cities across the country.

In the case of Jiangsu "Extreme Literature" using WeChat to spread obscene materials for profit, the suspect was escorted back to Yancheng.

In March 2020, the Public Security Bureau of Liquan County, Xianyang City filed an investigation on an obscene and pornographic live app based on reports from the masses.

According to investigations, there are a large number of male anchors performing obscene performances on "Star Live" and the associated "Little Goldfish" live broadcast platform. During peak periods, there are more than 200 online anchors. The number of people online in each live room ranges from thousands to hundreds.

There were 4170 registered anchors for the two apps, of which 113 were minors under the age of 18; there were more than 124,000 registered members, and the amount involved was about 40 million yuan.

At present, the public security organs have arrested a total of 93 criminal suspects. The main criminal suspects Jiang Moumou, You Moumou and other 14 persons have been transferred for prosecution, and the case is under further investigation.

On June 11, 2020, according to public opinion and related reports, the Zhengzhou Municipal Public Security Bureau quickly organized an inspection of the “Didi Driver Sexual Assault Live” incident on the Internet.

After investigation, the suspects Che Moutao and Gao Mouqi were married.

In the early morning of June 10th, for the purpose of making profit, the two of them used an illegal live broadcast app on Che Moutao’s mobile phone to openly perform obscene and pornographic performances to attract others to watch. Reward.

The task force fought for 20 hours and arrested two criminal suspects in Xuchang.

According to reports from the people, the Yancheng police cracked the case.

After investigation, the suspect Hu Mou built an obscene novel website and used high commissions to attract agents to promote it. The agents used traffic providers, and traffic providers entrusted advertising companies to apply drainage fission technology, and link advertisements to "fission type" in a short time. Spread to a large number of WeChat groups.

These links attract people to click with sensational fake news headlines, and use drainage technology to "hijack" the "back button" of netizens' mobile phones. When "back" is clicked, the page will only "refresh" to jump to the website.

In May and December 2020, the Yancheng police organized police forces to carry out two concentrated arrests in 15 provinces and cities. A total of 31 suspects were arrested, 8 promotion company gangs were destroyed, and the amount involved was nearly 40 million yuan.

In May 2020, the Beijing Municipal Public Security Bureau established a task force to investigate 6 websites suspected of spreading child pornographic and obscene videos for profit.

After investigation, the relevant websites contained a large number of obscene and pornographic videos and pictures involving children.

In order to evade supervision and crackdown, website operators set up their website servers overseas, and collect membership fees and advertising fees through fourth-party payment platforms for illegal profit.

In June 2020, the task force collected the Internet in multiple places, arrested 8 criminal suspects including actual operators of websites and payment platforms in one fell swoop, and destroyed the series of obscene websites.

Later, another person involved in the payment platform was arrested.

At present, 8 criminal suspects have been approved for arrest and 1 person has been released on bail pending trial. The case is under further investigation.

In the case of illegal sales of English electronic journals on Taobao's online store in Hangzhou, Zhejiang, the police analyzed and judged the case.

In June 2020, according to the clues transferred by the Zhejiang Provincial "Anti-pornography and Anti-illegal" Office, the Hangzhou Public Security Bureau launched an investigation into the illegal sales and distribution of English electronic journals in a Taobao online store.

In July and September 2020, the suspects Zhou Moumou and Huang Moumou were arrested and brought to justice.

7. The case of making and disseminating illegal publications by Ren XX in Dalian, Liaoning.

In March 2020, the Dalian Public Security Bureau dig deep through the expansion of the line and discovered an underground group composed of people from many places in the province, hidden in the urban-rural junction, producing and disseminating harmful information for a long time.

After investigation, the gang organized a recruiting of people, raised funds to purchase high-power external radios, modified them to broadcast harmful information, and produced a large number of illegal publications for dissemination.

In April 2020, according to reports from the masses, the "Anti-Pornography and Anti-illegal" Office of Wudi County, Binzhou City organized forces to conduct law enforcement inspections on 7 local warehouses and seized a large number of suspected infringements of pirated children's books. Preliminary statistics include "Explorations of the Submarine Column" and other cases. There are more than 1.8 million children's books and more than 31 million yuan in Mayang, involving 41 kinds of books from 19 domestic publishing houses.

The case was filed and investigated by Wudi County Public Security Bureau.

According to clues assigned by superiors, the Public Security Bureau of Anqing City successfully cracked the case after careful investigation, arrested 28 “intermediaries” for paid deletion of posts and “webmasters” of black websites that published negative posts, banned 122 illegal websites, and dealt with negative posts. More than 200,000 articles.

According to investigations, since 2018, two groups, Zhao Mou in Guizhou and Pang Mouping in Henan Province, have built a large number of "black websites", forwarding negative posts in batches, maliciously attacking and slandering party and government agencies, enterprises and individuals, and will not delete them without giving money. The post was used to coerce the implementation of extortion; Hefei Hao Zhen gang used the identity of "intermediary" to delete the post and linked up with the blackmail gang. After the victim contacted, they instigated the "black website" to continue posting for greater benefits; Shaanxi Yang Moubo gang used The paid deletion method, accepting the commission of others to delete the posts, the amount involved is nearly 3 million yuan.

The 14 principal offenders were sentenced to six years and six months to 11 months in prison in the first instance on suspicion of racketeering and illegal business operations.

In September 2020, the case was upheld at the second instance.

From 2013 to 2018, in cooperation with Liu Moupan, Guo Mou, Li Mouchang and others, for the purpose of illegal possession, fake journalists' identity, threatened by online exposure and reporting to government functional departments, in Shanxi, 8 cases were committed in Hebei, Inner Mongolia and other places, involving a total of 745,000 yuan.