Buying Krav-certified food should mean that you buy the most controlled food, and consumers are willing to pay more for good animal care. But Assignment review can reveal that it looks completely different on several Krav-certified farms. 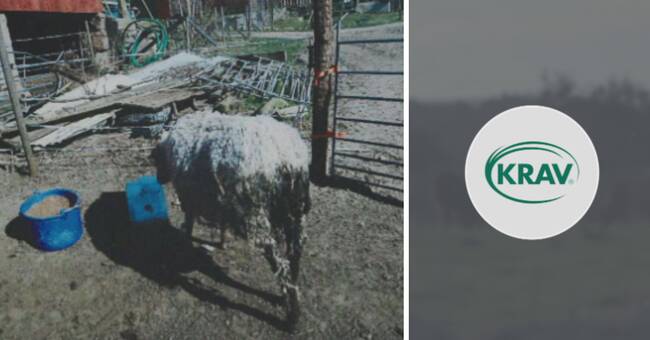 Assignment review visits a Krav-certified farm in Skåne with both sheep and cows.

But since 2013, the farmer has received serious criticism from the County Administrative Board for not complying with the Animal Welfare Act.

As recently as 2020, inspectors found lame sheep and dirty and sick animals that had not received veterinary care.

For over seven years, the County Administrative Board has established how the animal owner of this Krav farm does not comply point by point with the Animal Welfare Act.

At a Krav farm in Skåne, the County Administrative Board has for years had remarks on animal husbandry where cows and sheep have been skinny and dirty.

But despite that, the farm is still Krav-certified.

According to the pet owner's father, it is the County Administrative Board that has got it all on its hind legs, and says that Krav inspects the farm every year.

- They have not said a word about it, he says.

Another Krav-certified farm in Skåne has remarks from the County Administrative Board regarding dirty animals in cramped spaces and which lack protection from weather and wind.

The farmer there does not want to leave a comment.

The County Administrative Board has had remarks that the animals live too crowded and lack protection from the weather and wind.

A third farm has over 300 animals.

The County Administrative Board remarked on injured, sick and lean animals with poor feed.

The pet owner replied that the quote: "would not make me feed more or better because it would not be economically defensible in these times".

The farmer questions the County Administrative Board's inspections and believes that they are incorrect.

- They are part of Animal Rights, he says to the Assignment review reporter.

"It is absolutely not acceptable"

In Assignment review, more than 30 farms have been found in Sweden that are certified Requirements for animal husbandry, and thus must take care of animal husbandry more strictly than required by law, but in various ways violated the Animal Welfare Act.

But despite the fact that Krav makes checks, they rely on the farmers themselves to inform them about injunctions and judgments.

- They are in fact obliged, according to Krav's rules, to tell about injunctions or if it is so disgusting that it is even greater deviations.

This is how the information should go to the control company.

And if it happens, or when it happens, the certificates will of course be withdrawn in cases like this, says Anita Falkenek, CEO of Krav.

If they do not then?

- Yes, if they do not, it will be even harder to prevent, as well as shortcomings in animal care, says Anita Falkenek.

Anita Falkenek says that they should go to the bottom and see if there are shortcomings in the control and control functions if it turns out that the shortcomings are correct.

- Then we must of course discuss how we can tighten the rules so that we can ensure that things like this do not come through.

It is absolutely not acceptable, she says.

See more in tonight's Assignment Review at 20.00 on SVT1 or on SvVT Play.