Corona vaccine: The Greens are lenient with Jens Spahn

Surprising backing for the Minister of Health: The Greens are foregoing sharp attacks in the Bundestag on the subject of vaccine procurement, of all things. The SPD accuses the opposition party of behaving like “government spokesman for the CDU”. 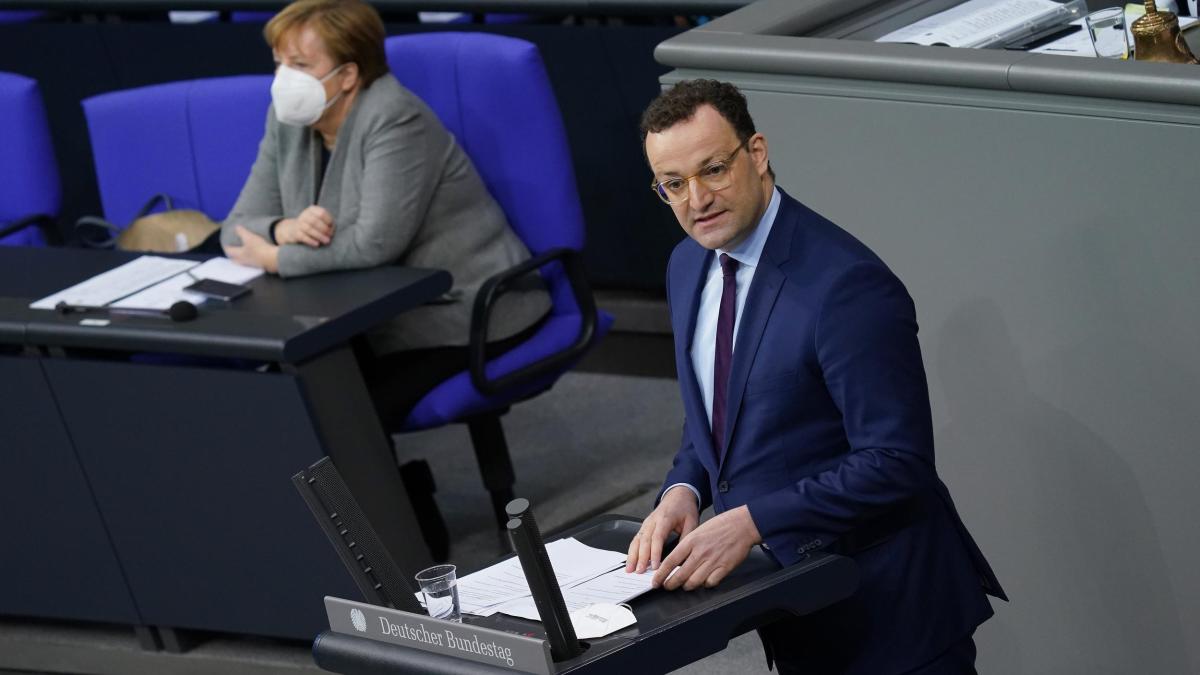 “I have to tell you in all honesty,” said Schneider in his response to the government statement by Federal Health Minister Jens Spahn (CDU) in the Bundestag on Wednesday, “I was offered an offer from Biontech and Pfizer to make 200 million additional doses available to the EU , nothing known. "

“If you had asked me as an MP and my group: Should we buy these additional quantities?” Schneider pauses for a moment.

"Then I can only say, in view of the social and economic costs that the shutdown of this country had: The costs of obtaining the vaccine are a trifle - a real trifle!"

With his words Schneider continued the criticism of the Social Democrats of Spahn, which had been going on for two weeks.

The biggest affront in the eyes of the coalition partner is the four-page questionnaire handed over to Spahn last week on vaccine procurement from the pen of the SPD-led federal states, flanked by Vice Chancellor Olaf Scholz (SPD).

the social democratic MP Florian Post even called for an investigative committee.

When, however, after the questionnaire was handed over, the accusation was raised that the SPD was already entering the election campaign with the action, the comrades first tried to appease: The election campaign would "start very late," said Klingbeil to WELT AM SONNTAG.

But Spahn has not yet answered the detailed questions in the catalog.

On Tuesday he only sent a letter to all MPs, in which he gave general information on the status of the vaccination campaign.

People in the SPD are dissatisfied.

"The questions that we have asked are not indecent, no insult to majesty," said parliamentary deputy Bärbel Bas in the Bundestag.

It is right to ask how Europe signed the contracts, whether the vaccines on offer were also called up or whether Germany could have bought them earlier in order to increase production capacities in good time.

In fact, Spahn cautiously admitted to having made mistakes at one point or another.

“Of course, looking back it turns out that not every decision in the past few months has been right,” he said.

“We learn from this.” However, Spahn left open which decision was specifically wrong.

Instead he formulated, as so often, with a superlative: “Of course, the biggest vaccination campaign in history is jerky.” He did not mention the SPD's catalog of questions at all;

he warned, however, that the fight against the pandemic must be carried out “across party interests and boundaries”.

"Sometimes it seems as if we acted very unprofessionally"

Martin Stürmer defends the course - and admits: "If we have the approval of Moderna, the whole thing will look very different."

The Minister of Health went into greater detail on the need for European vaccine procurement, which he justified several times a day in interviews.

The interesting thing about it: Apart from the AfD, no parliamentary group criticizes the EU's common path.

The only criticism is the timing and scope of the orders from the Commission.

However, Spahn remained narrow-lipped in his remarks.

In the meantime, the Greens' silence when it came to vaccine procurement was noticeable.

While the other opposition groups spoke of various omissions, the leader of the Greens, Katrin Göring-Eckardt, held back.

She only stressed the importance of acting in a European way.

"I think large parts of the debate, where it was about 'we against them' or 'what did who did when', do not correspond to the seriousness of the situation in which we are currently.

This prompted SPD man Schneider to make a smug comment: “I am amazed that the Greens are now acting more as government spokespersons for the CDU than doing real opposition politics.

But here you go, ”he called.

There was laughter from individual MPs and applause.

A few days ago Spahn had praised the attitude of the Greens in an interview with WELT AM SONNTAG: “The Greens criticize the matter quite harshly.

But they seem to me to be interested in solutions to the matter. ”They did their job as opposition party, the government theirs.

The German trend from the beginning of the week showed that even among supporters of the Greens, criticism of the speed of vaccinations in Germany, for which the federal states also blame the federal government, is surprisingly low: 77 percent of FDP supporters criticize the vaccination speed in the survey , followed by 63 percent of SPD supporters and every second AfD supporter.

Of the Green supporters, only 45 percent are dissatisfied.

To evaluate the gentleness of the Greens entirely as preparation for a possible black-green government would be excessive.

Because even if the party is reluctant to criticize the vaccine procurement, it does not generally back Spahn.

Göring-Eckardt complained in the Bundestag about a lack of nationwide education and information on vaccination.

"It cannot be that the granddaughter has to scour the Internet so that the 80-year-old grandfather can get a vaccination appointment." Many Corona rules are also "unrelated to life", says Göring-Eckardt - for example, that siblings cannot visit their grandmother together or close daycare centers and culture while the offices are still open.