Marko Hietala announced that he was leaving Nightwish. This is not the first time that there have been sudden changes in the band. 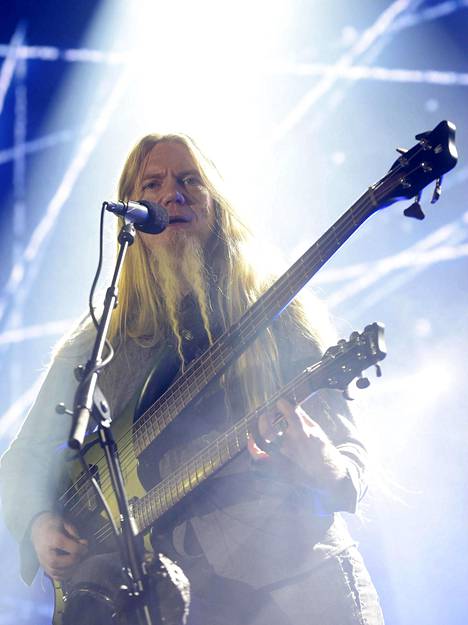 Marko Hietala, known as the bassist and singer of the nightwish band, announced on Tuesday that he would leave the band.

Hietala's decision came as a surprise to the fans and the band announced that on the upcoming world tour, Hietala will be replaced by a session bassist.

- If I continued like this, it would be dangerous for me and the people around me.

Some of my thoughts a moment ago were gloomy.

I have two sons, my wife, the rest of my family, friends, a dog and a lot of love, Hietala commented on his decision in the press release.

Marko Hietala said on Tuesday that he would leave Nightwish and withdraw from the public for the time being. Photo: Vesa Moilanen / Lehtikuva

Hietala said in a press release that he does not believe that staying out of the music industry would be a permanent solution.

He also knocked out all the conspiracy theories that people could possibly come up with on the subject.

- Prosecuting Tuomas (Holopainen) would be an insult to both him and my free thinking.

This is a very sad thing for all of us.

Tarja Turunen was fired in an open letter

Founded in 1996, Nightwish is one of the most successful bands in Finland ever.

Over the years, several changes have taken place in the composition of Nightwish.

Nightwish blinded the fans by announcing in an open letter published on the band's website in 2005 that soloist Tarja Turunen has been fired from the band.

In the letter, the band highlighted the inflamed spaces between Turunen and Holopainen.

At that time, Tuomas Holopainen stated that value worlds and chemistry no longer met.

Tuomas Holopainen has later said in interviews that he regrets the way in which Turunen was separated from the band.

- Things went as they should, but the way it was done was bad.

All of us can admit it.

An animal driven into a corner doesn’t work sensibly, it just wants to get out of the corner by any means.

But in that situation, everything went wrong, it was a very poorly managed situation, Holopainen said in an interview with Sound in 2015.

Marko Hietala opened the events that led to Tarja Turunen's firing in the book Stainless in 2017.

According to the book, the cooperation with Turunen and, above all, his manager Marcelo Cabul did not work.

The book, written by Timo Kangasluoma, tells about behind-the-scenes clashes.

The book says that Turunen announced that he would make one more record with the band, but no gigs.

He had also said he would never perform with the band in the United States again.

After all, you knew the cancellation of the Yankee Round was a big notch in the earnings of the whole round band, and this happened just when the band's best record was rising there.

We were losing the world's largest market, Hietala said in the book.

Tarja Turunen has said that the kicks were a surprise to her.

I cried every hell of a day with Marcelo.

After that he had to return to Finland and to the stage.

The audience cried and I cried.

The atmosphere was palpable, Turunen has recalled in an interview with Radio Rock. Photo: Olli Häkämies

The band's keyboardist Tuomas Holopainen and Hietala discussed the situation with the band's Management.

- It was I who was the first to say that we can no longer continue with these two, Hietala revealed in the book.

- Then we all came to the conclusion that we have to dismiss Tarja.

We didn’t really want to get rid of Tarja, but she had already given all her own decision-making power to Marcelo, who cares little about us.

The options were zero.

Turunen's almond heir was searched with an open search, and finally, after a year and a half of searching, the Swedish Anette Olzon joined the band.

Two albums later, however, Olzon and Nightwish’s paths parted in 2012 in the middle of an Imaginaerum tour.

Swedish singer Olzon has said in public that the departure from Nightwish did not take place in very harmonious characters.

In a 2013 interview with Me Women, Olzon said she was fired from the band just after she had said she was pregnant.

I got fired, Olzon said.

He has said he could never get on stage with Nightwish again.

- They treated me so badly.

I'm sorry, but considering everything that has happened, I do not think that I could never do that, Olzon stated in its 2019 interview.

Anette Olzon does not remember her time in the ranks of the band. Photo: Timo Aalto

Hietala opened up against the background of Olzon’s kicks in Stainless in 2017. According to Hietala, Olzon teased himself out of the band.

The “Bring Tarja back” signs, which flickered in the audience, eroded the Swedish singer's self-esteem.

- There was crying and screaming.

At one gig, Anette sang three songs and left the stage, Hietala repeated.

Nightwish played a few songs without his soloist.

At the hotel, the situation escalated.

- At the hotel, Anette cried and was furious.

We reportedly should have stopped playing when he left the stage and supported him.

- We had reportedly abandoned him.

We had been selfish shit, even if we just tried and managed to play those covers to get the whole gang out of place with intact skins.

Hietala, who played in many bands on a two-year world tour, noticed that the collaboration with Olzon would hardly be very long.

- Here was another person who always demanded more and more only because he wanted to demand, Hietala estimates in the book.

On a U.S. tour in Denver, Olzon refused to perform, citing his malaise.

In 2014, the band's drummer Jukka Nevalainen announced that he was leaving the band due to severe insomnia.

Floor Jansen toured with Nightwish as an visiting soloist after Anette Olzon left the band in the middle of the tour. Photo: Lassi Rinne

In interviews, Tuomas Holopainen has praised the band's current soloist Floor Jansen and described him as a perfect addition to the band.

- Working with Floor is one of the easiest things.

As a singer, she is versatile and, most importantly, rarely sees similar motivation and dedication, Holopainen has said in an interview with Metal Hammer.

News/Politics 2021-01-12T14:59:40.471Z
Nightwish has been boiling behind the scenes for years - the downside of success came when Tarja Turunen was fired and Anette Olzon rushed from the stage crying
News/Politics 2021-01-12T17:50:03.212Z
Marko Hietala's decision to resign got the fans - the shock announcement made headlines around the world
News/Politics 2021-01-13T04:50:20.321Z
How is Nightwish's Marko Hietala after the shock? There was a unanimous verdict from the experts - the future of the band now depends on one thing
Life/Entertain 2020-05-22T15:01:10.558Z
Floor Jansen: 'I want everything to stay the way it is now'
News/Politics 2020-12-04T17:20:08.878Z
Jenni Haukio, Anna Abreu, Jaana Pelkonen ... Which of them is the queen of the 21st century Castle festivities? Vote!
News/Politics 2020-12-06T08:14:20.988Z
HS Espoo | A couple from Espoo received a genius stamp in the middle of an evening party - An improvised drink was born, which is now torn out of hand in Swedish Systembolagets
News/Politics 2020-10-10T14:34:03.222Z
Korona revolutionized Tarja Halonen's everyday life and breaks decades of tradition: "You probably don't have to wear an evening dress at home"
News/Politics 2020-12-19T19:04:44.170Z
Masked Singer Finland winner reveals how secretly the program was made - this is how the identities of the competitors were concealed until the last
News/Politics 2020-09-29T00:47:39.932Z
The turnaround of the expedition to destroy the largest long-range patrol in the Continuation War went unexplained for decades - a new book tells of the Department of the Kaleva, whose last soldier did not return from the Soviet Union until 1955.