His Highness Sheikh Mohammed bin Rashid Al Maktoum, Vice President and Prime Minister of the UAE and Ruler of Dubai, affirmed that the UAE, with the vision of its wise leadership and the arms of its loyal children, is able to underline achievements, create opportunities and overcome challenges, regardless of their extent and impact, indicating the necessity of 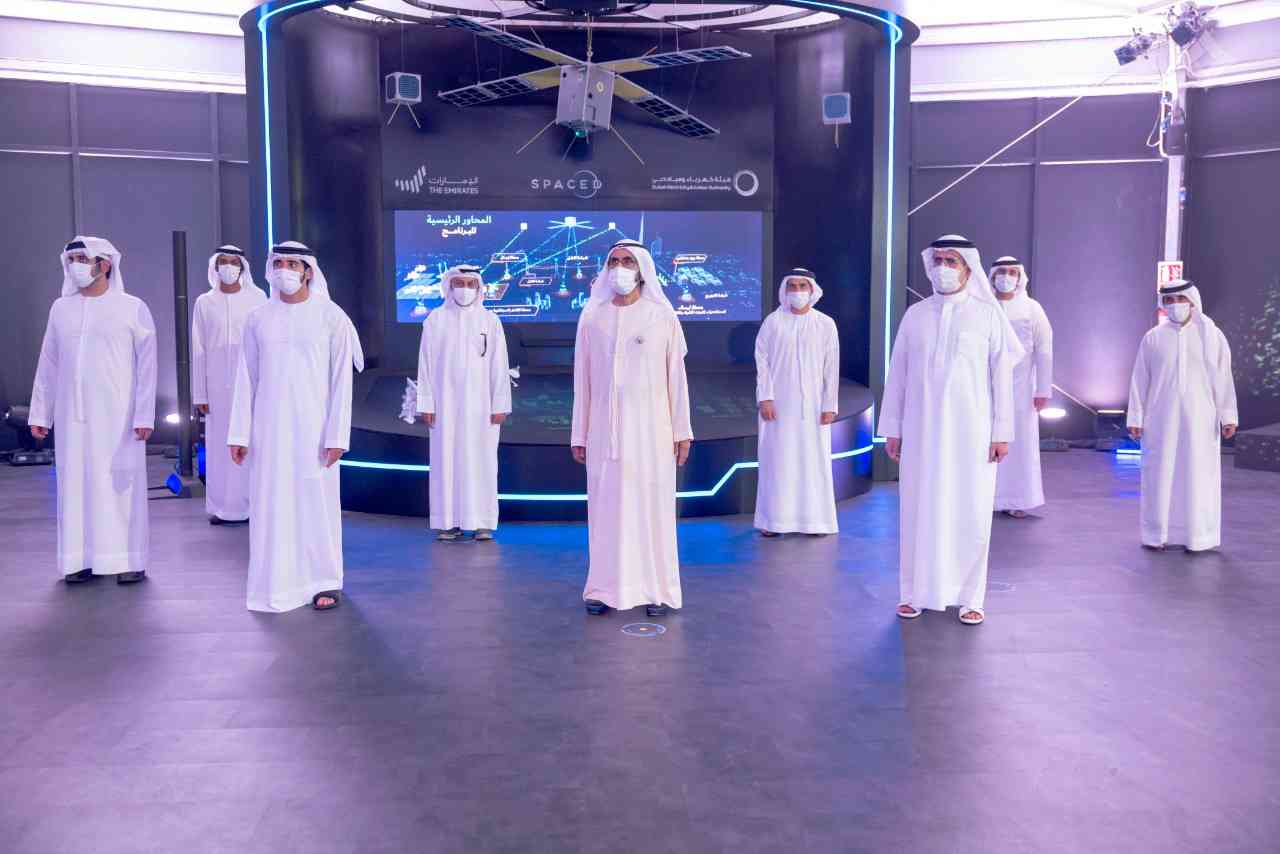 His Highness Sheikh Mohammed bin Rashid Al Maktoum, Vice President and Prime Minister and Ruler of Dubai, affirmed that the UAE, with the vision of its wise leadership and the arms of its loyal children, is able to underline achievements, create opportunities and overcome challenges, regardless of their extent and impact, indicating the need to work on developing projects and solutions Innovative that helps to achieve the strategic goals of the country, taking into account the foundations of sustainability, by applying the latest technologies that the world has reached in various fields.

His Highness said: We are moving steadily and firmly towards leadership in all fields, work and construction have never and will never depend on this good land, to implement innovative projects and initiatives aimed primarily at achieving people's happiness and providing a decent life for all, taking into account the need to qualify and refine the skills of national cadres. To be able to innovate and underscore achievements.

His Highness added: The real value of the projects that we are launching today is measured by the extent to which they achieve the goals and strategic plans, the extent to which they employ the available materials, and rely on everything new and modern, in addition to their positive impact and the provision of the highest levels of quality of life for members of society, which are basic components through which we work to achieve excellence. In community service.

The project supports the National Space Strategy 2030, which aims to support the achievement of the UAE vision in the field of space industry, with its various sciences, technologies, applications and services.

His Highness heard from Saeed Mohammed Al Tayer, MD and CEO of the Authority, a detailed explanation of the stages of the Dubai Space Electricity and Water Authority program, which will work to enhance efficiency and operational effectiveness, including preventive maintenance of the electricity and water networks (planning, production, transmission and distribution). The program will also contribute to enhancing the Flexibility and agility in monitoring and controlling the electricity and water networks, and accurate and rapid follow-up of the impacts of weather phenomena and climate change on energy supplies and energy infrastructure, including water desalination, in addition to providing a backup support system for the network through satellite communications.

On this occasion, Saeed Mohammed Al Tayer said: We are guided by the ambitious vision of His Highness Sheikh Mohammed bin Rashid Al Maktoum, Vice President and Prime Minister of the UAE and Ruler of Dubai, who says, “The UAE's ambition in the space sector foresee, plans and manufactures the future ... and our youth, engineers and pioneers are opening new horizons in The fields of science, technology and innovation in this vital field for the future of our world. ”The Dubai Space Authority program will contribute to enhancing global competitiveness and strategic partnerships for the national space sector in the country and building a new phase of Emirati capabilities in the field of space exploration, technology and related industries to employ them in strengthening electricity networks. And water in Dubai.

Al Tayer added: The DEWA space program, through cooperation with a group of world leaders in the field of satellites and their applications, will provide world-class services, as the authority works to ensure the continued availability of its services by 100% in accordance with the highest standards of availability, reliability and efficiency thanks to the advanced digital infrastructure. Which it owns, and relying on innovation and sound scientific planning to contribute to the UAE being the best country in the world by its centenary in the year 2071. "

Al Tayer explained: The program is in line with the Dubai Clean Energy Strategy to provide 75% of the energy production capacity in Dubai from clean energy sources by 2050, as the performance and efficiency of the photovoltaic solar panels in the Mohammed bin Rashid Al Maktoum Solar Complex will be monitored through special cameras located on The main satellite and studying the impact of weather phenomena and climate change on energy infrastructure and supplies.

The "SpaceD" project also includes launching satellites in support of the main satellite, which will be manufactured by Emirati hands at the Research and Development Center at the Mohammed bin Rashid Al Maktoum Solar Energy Complex .. The system includes a ground satellite station (in the Mohammed bin Rashid Al Maktoum Solar Complex) ) And ground transmitting stations that use the technologies of the Internet of Things and artificial intelligence through sensors distributed on different sites of the network in order to increase the efficiency and effectiveness of the work of planning, operation and preventive maintenance of production, transmission and distribution, smart networks and electric vehicle charging stations .. Also, multi-spectrum and high-resolution thermal imaging devices such as these will be used Used on board spacecraft, specifically designed for use in electricity and water networks, in detecting thermal fingerprints in high voltage transmission lines, substations, buildings and solar power stations.

To enhance Hatta's location as one of the most prominent tourist attractions in the emirate of Dubai, His Highness Sheikh Mohammed bin Rashid Al Maktoum, Vice President, Prime Minister and Ruler of Dubai, launched two projects that will be implemented by the Dubai Electricity and Water Authority, namely: “Dubai Summit” and “Sustainable Hatta Falls” .

The "Dubai Summit" project includes the construction of a 5.4 km cable car to transport tourists from the Hatta Dam area to the Umm Al Nsour Summit in the Hatta region, the highest natural summit in the Emirate of Dubai, at an altitude of 1300 meters above sea level .. The project will constitute an important tourist attraction in the UAE. ... The cable car route has been chosen so that it passes over the Hatta Dam Lake and the Upper Dam Lake for the hydroelectric station project, passing the mountain chain until it reaches the summit of Umm Al Nsour.

The project includes three main stations, including the departure station, which will be constructed on an upper platform above the Hatta Dam that will be linked to the car parks using one of the advanced means of transportation, the intermediate stop which contains a viewing platform and facilities to serve tourists, and the summit station which includes a medium-sized hotel and a panoramic viewing platform And facilities to meet the needs of tourists.

The project also includes hiking tracks and recreational facilities in addition to several other services that provide a world-class tourism environment. The project will be constructed according to the highest standards of security and safety.

As for the "Sustainable Hatta Falls" project, it includes the exploitation of the slope of the upper dam, its use as a natural waterfall, the creation of a waterway along the car parks below the dam, the development of the area and its conversion into recreational spaces, cafes and restaurants, so that this water can be collected at the end of the stream, recycled and pumped to the top of the slope, In addition to raising fish in the water stream, which is an attraction for children and families.

Saeed Mohammed Al Tayer said: We are working according to the vision of His Highness Sheikh Mohammed bin Rashid Al Maktoum, Vice President and Prime Minister of the UAE and Ruler of Dubai, may God protect him, to achieve comprehensive and sustainable development throughout the Emirate of Dubai .. These projects are among the initiatives adopted by the authority aimed at achieving Providing pioneering and innovative job opportunities for citizens in Hatta through pioneering tourism facilities, which contributes to strengthening Hatta's position as one of the most prominent tourist attractions in the Emirate of Dubai.