Tickets grabbing for the Spring Festival travel season to welcome the peak: under the in-situ New Year initiative, there are still more tickets for popular routes

Chinanews client, Beijing, January 12 (Lang Lang) Starting on the 12th, train tickets for the twenty-ninth lunar month (February 10) will be officially launched. According to previous years, it is now the peak of the Spring Festival travel ticket grabbing period . However, due to the impact of the epidemic and the "unnecessary non-return home" initiative in many places, the intensity of ticket g 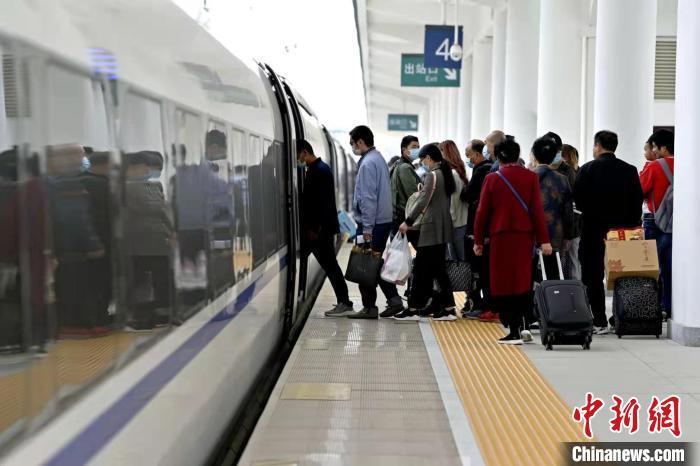 Chinanews client, Beijing, January 12 (Lang Lang) Starting on the 12th, train tickets for the twenty-ninth lunar month (February 10) will be officially launched. According to previous years, it is now the peak of the Spring Festival travel ticket grabbing period .

However, due to the impact of the epidemic and the "unnecessary non-return home" initiative in many places, the intensity of ticket grabbing for the Spring Festival this year seems to have decreased. During the peak travel period before the holiday, many popular routes still have more tickets.

Data map: The picture shows traveling passengers are queuing up in an orderly manner.

Tickets for the twenty-ninth lunar month are officially on sale

The 2021 Railway Spring Festival Transport will start on January 28 and end on March 8, for a total of 40 days.

According to the ticket sales situation in previous years, during this period, the ticket rush before the Spring Festival has entered the "white-hot stage."

The fifth and sixth days of the first lunar month, that is, February 16 and February 17, 2021, are the peak return journeys. Passengers need to purchase train tickets for these two days on January 18 and January 19, 2021.

According to official Weibo data from China National Railway Group Co., Ltd., since the launch of Spring Festival Transport tickets in 2021, as of January 5, a total of 4.916 million railway tickets have been sold, of which online bookings accounted for 96.3% of the total ticket sales.

Tickets for the Spring Festival Transport are not as strong as in previous years, there are still more tickets

In previous years, train tickets for the three days before New Year’s Eve were particularly in short supply. In particular, return tickets for popular routes always appeared "on sale in seconds" and it was difficult to find a ticket.

Even if there are a few remaining tickets, the arrival time is late at night or early morning.

However, this year, affected by the epidemic, many places have advocated non-essential non-returning to hometown and spent the holidays on the spot to reduce the flow of people as much as possible. At the same time, many places have also made it clear that those who return home during the Spring Festival holiday must have a negative nucleic acid test certificate.

On the Internet, netizens are also hotly discussing whether to return home for the New Year this year?

Many people are still holding a wait-and-see attitude for the Spring Festival transport tickets.

Under the special background, this year’s Spring Festival travel ticket grabbing is not as intense as in previous years. Chinanews.com checked the 12306 website on the 11th and found that as of 17:00 on January 11th, there were many hot spots on February 9th (the 28th of the twelfth lunar month). There are still tickets left for the routes and trains.

Data map: Anti-epidemic personnel are checking the temperature of passengers.

Many railway stations in Hebei stop selling tickets to Beijing

Recently, local confirmed cases have appeared in many places. Considering the current epidemic situation, the transportation departments of many places have made special arrangements for epidemic prevention during the Spring Festival.

On the 11th, Hefei City, Anhui Province issued the No. 1 Announcement on Epidemic Prevention and Control, requiring special transshipment work classes to be set up at train stations, bus stations, airports and expressway exits, and closed-loop implementation of all personnel coming to (returning) from areas with a history of living in high-risk areas Transshipment, and strictly implement centralized isolation or health management.

The Transportation Bureau of Shenyang City in Liaoning also stated that Shenyang Taoxian Airport, Shenyang North Railway Station, and Provincial Express Bus Terminal have all received notices from the Port Traffic Group of the Shenyang Epidemic Prevention and Control Headquarters on strictly implementing the control of the Shenyang Channel.

The prevention and control of the epidemic has also had a certain impact on the sales of train tickets during the Spring Festival.

The official website of Railway 12306 reminds that from now on, at all stations in Hebei Province where trains entering Beijing stop, passengers entering Beijing must provide a nucleic acid negative test certificate within 72 hours when entering the station.

In accordance with the State Council's joint prevention and control mechanism and the relevant requirements of local governments for epidemic prevention and control, the railway department has adopted measures to restrict ticket purchases in some sections. Passengers can learn about the permitted ticket purchase sections through the "check ticket" function on the 12306 official website.

Stations in Shijiazhuang and Xingtai have suspended the sale of tickets to stations across the country.