After the black winters, everything is now removed from the snow in Helsinki. More can be sought and preferably a lot if children and the child-minded are asked. 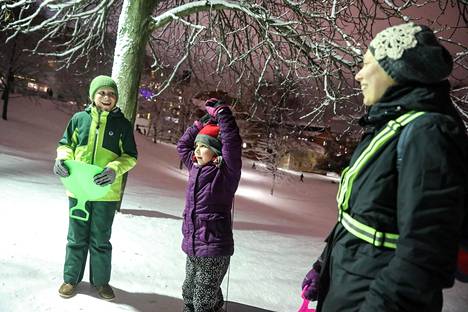 Helsinki, the city of snow.

Now it is available after many black years.

And more is coming, the question is how much more will be taken?

- This is how much, Matilda Häggman 8, looks like with her glove, which swings at a height of a meter on the slope of a toboggan run in Koffinpuisto.

If not meters now, then at least 30-50 cents have been promised on top of these current ones.

In the language of adult meteorologists, it is exceptionally much, quite normal, even desirable in the world of a child’s experience.

- So much, Matilda Häggman (center) shows how much snow she still thinks should come.

The rescue service warns, the parents bless, but the knee, who grew up in the shade of mild winters, takes the opportunity from the snow when everything comes out.

Snow, that essential building material for the winter, is being torn from the ground in Johannesenisto in Helsinki's Ullanlinna.

It creates something permanent and concrete, more than just memories.

- This is snowman Kimmo, four brisk friends from Norssi's 9th grade proudly present a snowman elevated in the school park.

There’s a snow-capped nose, a captivating smile, and arms embracing a ragged world full of the joy of life of a young snowman.

The quartet escaped to make a snowman as soon as the French hour was over at 4 p.m.

French is not Latin, but the saying Nomen est omen (The name is a forerunner) is familiar to the boys of the party Pyry.

So that the young men don’t get confused, one of them is Pyry P and the other is Pyry J. So two Pyry around the same snowman, it can’t be a coincidence.

The point must be pursued.

- Yeah, yes, this has been heard, the boys are laughing.

And the predicted new endeavors will not hurt the girls in the party either.

Norsle's 9th graders Elle, Aljona, Pyry J. and Pyry P. built a Kimmo snowman in front of their school as soon as the French class was over. Photo: Lassi Rinne

But what is a snowman in French?

Has a hubby made of snow been such a rare guest opposite the school that a French lecturer has not considered it a noun for young people to teach.

The answer may be heard tomorrow at school, greetings but to the teacher.

Pyry P has started the ski season at the cottage on Taipalsaari, but has not had access to skis at home.

There is also joy in the snow indirectly.

- It's wonderful when it comes to light, Aljona says.

There is a screaming in the well park.

The snow is slush, it crumpled underfoot and polishes on a hill as the best glide.

The pedestrian is in trouble due to lack of friction, but going up the sledge is very fast.

Sofia's friend Nella is also involved in the counting.

- I guess it's the fifth time on this hill, the crew nods.

Siblings Olivia and Sofia and a friend Nella took the joy out of a slippery sledge hill in Ullanlinnanmäki in Helsinki's Kaivopuisto. Photo: Lassi Rinne

The evening has darkened, but the counting is not over yet.

- This is so wonderful!

What is your favorite season?

- Winter, of course, echoes from one mouth.

Is there anything sad in winter then?

The trio apricot for a moment.

Right now, starting from the high slope of the toboggan run, you don't want to find anything to blame for winter.

That, too, is not immediately promised.

When the spectacular snowfall that begins on Tuesday sometimes eases the forecast in Thursday’s lands, the frost begins to speak.

The winters, which are significantly reduced to the southern parts of the country, promise a long life for winter and Kimmo snowman.

Anna Häggman and daughters Lina and Matilda sledged in Koff Park in Helsinki.

Lina thinks that there should be another meter of snow. Photo: Lassi Rinne

Back to the hill.

In Koff Park, Matilda Häggman and her mother have arranged a surprise for the youngest Liina, 6 years old.

- We decided to surprise Liina and come straight from the kindergarten to go down the hill, Anna Häggman says.

The hill has now been lowered in Koff Park for days of the week, thanks to traditional winter weather.

There are no signs of boredom.

- Every day a couple of hours have been spent on the sledding hill, Anna Häggman says.

You can do more with the snow, even in your own yard.

- We made our own house out of snow, Matilda says proudly.

It is one-room and round in shape.

Living room and kitchen where you can cook.

- We made snow slag, snow pasta and snow pancakes, the girls list the most popular snow treats of the season.

There were no other answers to this park gallery in snowy Helsinki at this time.

Or is it the blessing of the snowfall that the adult has learned the weather, after which even the hardened adult secretly likes the snow, even a little?

Its next few days look like when Pyry strikes.