The signal instant message is strongly encrypted. Its communications cannot be spying on bystanders. 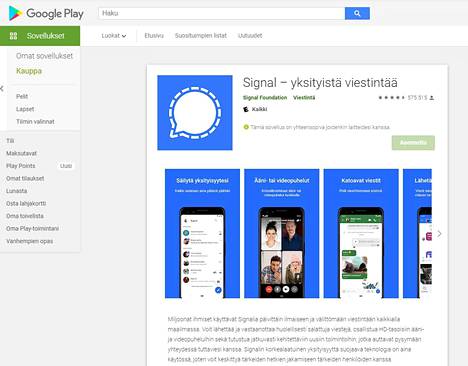 Over the past 24 hours, the Signal instant messenger has sparked great interest after technology visionary Elon Musk urged people to switch to it.

In the background is also affected by WhatsApp's recent announcement begins to combine WhatsApp and Facebook user information.

The first version of Signal was released in 2014. Today, the app is maintained by the nonprofit Signal Technology Foundation, backed by co-founder of WhatsApp, Brian Acton.

Signal and WhatsApp have largely the same basic functions.

The application is available in Finnish.

The signal has been downloaded from Google Play more than 10 million times.

However, the figures are small compared to WhatsApp.

The application wants to know very little about its user.

This is because phone numbers serve as a basis for communication like WhatsApp.

No data is collected about users.

Signal is available for iOS and Android and can also be used on a computer via the desktop version.

Like WhatsApp, Signal can only be used on one mobile device at a time.

It is more limited in functionality and does not contain stickers, for example.

In addition, many users complain that video calls are not as smooth as their competitors.

The app has the option of missing vistas that are only visible for a user-defined amount of time.

Signal has the ability to process images before sending.

Automatic blurring of the face is one of the functions. Photo: Henrik Kärkkäinen

The application saves them encrypted on your phone so that other applications cannot access them.

All content, be it text, images or videos, is stored in a single file that cannot be read by external applications.

For example, images sent in Signal cannot be viewed with a file manager or image viewer on your phone, such as WhatsApp images.

This is important if someone takes possession of your phone and tries to explore its contents.

If you have protected the Signal with a fingerprint or pin code, no one will be able to read your communication.

For security reasons, Signal does not have an automatic backup of conversations to the cloud service, but must be done manually.

Before that, the copy is protected by a 30-digit code, and the copy must be transferred from the phone by connecting it with a cable to a computer or via the cloud service.

If the security code is drowned, the backup cannot be restored and the previous conversation is lost, for example when changing the phone.

Backup must be activated in Signal settings.

After its implementation, the application creates a 30-digit code-protected file containing all communications on a daily basis, which can be copied. Photo: Henrik Kärkkäinen

There are also differences in WhatsApp in parts that are invisible to the user.

The signal code is free, ie anyone can read and use it.

Something about the usability of the code is that WhatsApp has started using it to protect its own communications.

This is allowed because the Signal program code is freely available to anyone.

The security of the device has been quoted elsewhere.

Earlier this year, the European Commission called on its employees to use Signal instead of WhatsApp.

Strong encryption also has its downsides.

Isis listed it among its secure communications apps for its fighters in 2015 because the app doesn’t have backdoors that allow you to track communications.

Like other instant messengers, Signal is a joy only when it is used by communication partners.

Although the Android version of Signal can also be used as a text message application on your phone, text messages are sent using the standard sms protocol.