Chinanews client, Beijing, January 7th (Reporter Zhang Xu) At the beginning of the new year in 2021, Tesla will give users a "great gift."   Tesla China's official website announced on January 1 that the Tesla Model Y long-life version will be reduced by 148,100 yuan and the starting price will be 339,900 yuan, and the Model Y Performance high-performance version will be reduced by 165,100 yuan 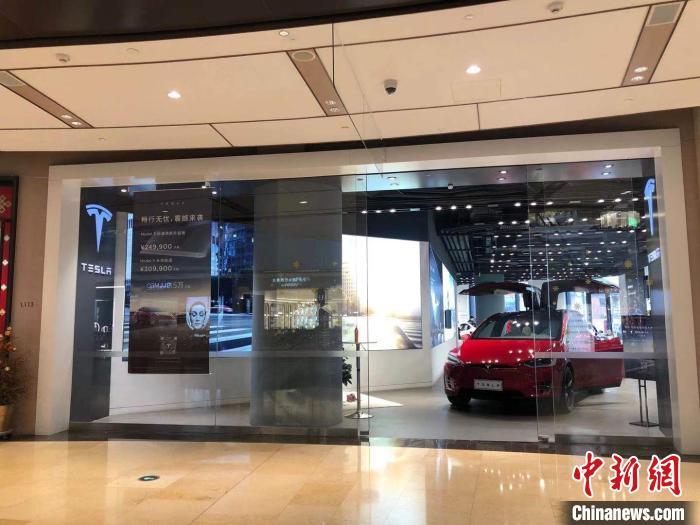 Chinanews client, Beijing, January 7th (Reporter Zhang Xu) At the beginning of the new year in 2021, Tesla will give users a "great gift."

The price cut stimulated the nerves of consumers, so that Tesla's official website in China was paralyzed.

On January 6, the delivery date displayed on Tesla's official website in China has been scheduled to the second quarter of 2021.

In the face of the menacing Tesla, can new car-building forces survive?

at least have to wait several months

Tesla Model Y is positioned as a medium-sized SUV. It is the second model to be put into production in Shanghai, China after Model 3. It is developed on the same platform as Model 3, and the share of parts and components can reach 75%.

Industrial Securities had predicted that with the continuous increase in the localization rate and production of Model Y parts, there is still room for further reduction in the official selling price of Model Y models, and continued to increase the sales of Tesla products in the Chinese market.

Tesla has also made several price cuts before, but this time it dropped 160,000 yuan in one go, which exceeded many people's expectations.

After announcing price cuts, Tesla offline stores in Shanghai, Guangzhou, Hangzhou and other places were extremely popular, and the official website was paralyzed because of the excessive number of visitors.

Some media reported that within 10 hours after the official pricing was announced, the total number of domestic Model Y orders exceeded 100,000.

In this regard, Tesla staff said: "Model Y bookings and test drives are very popular, but the data of 100,000 orders in 10 hours is exaggerated." He also said, "There will be a lot of people in the store these days. Yes, consumers can go staggered."

On January 4, the reporter came to the Tesla Experience Center in Chaoyang District. Although it was a working day, more than a dozen staff members were still very busy.

"Before, I mainly looked at Model 3. Now that the price of Model Y is reduced, most of them are looking at Model Y." An uncle at the scene has been lining up for Model 3 since last year. He saw that Model Y dropped so much and decided to change Into this SUV model.

But the sales staff told him that orders are placed now, and the fastest delivery will be in March. “Most of the orders now are for the modified Model Y, which cannot be produced. If you want to mention the car in a hurry, there is a pre-modified model. Without a heat pump, the battery life is almost too good."

"The marked cruising range of the Model Y endurance version is 594 kilometers. We tested the models with the heat pump internally. In winter, the battery life can reach about 500 kilometers with the air conditioner on."

Many people came to see the car in the Tesla Experience Store at Qiaofu Fangcaoyuan in Chaoyang, Beijing.

Weilai "does not cut prices", Xiaopeng is "confident"?

All models of Weilai Automobile ES6 and EC6 can be equipped with battery packs, with a cruising range of more than 600 kilometers, but an increase of 58,000 yuan is required, and the vehicle price exceeds 400,000 yuan.

Previously, Weilai’s models had a price advantage compared to Model Y, but in the face of Tesla’s 160,000 yuan price reduction, Weilai’s price is much higher than Tesla.

After Tesla's price cut, it was reported that many car owners who had booked Weilai switched to Tesla, which even caused congestion on Weilai's official website.

Regarding the rumors of chargebacks, Weilai co-founder and president Qin Lihong said at a press conference held on January 3: "We don’t know what the source of Weilai’s unsubscription news is. Our orders are very stable. Increase. There is also a common sense issue. Weilai’s official website has nothing to do with orders."

Qin Lihong also said, “Nio’s new cars do not cut prices, because Nio’s user treatment is better than others, and the product materials and levels are at that level. This is Nio’s strategy.”

The sales staff of the Weilai Experience Store in Chaoyang District, Beijing also expressed the view of not reducing prices.

"We have no plans to reduce prices. We are positioned differently from Tesla. We have advantages in battery life and experience. Cars reserved before January 10 will retain the 2020 new energy vehicle subsidies, and the subsidies will decline in 2021, so the car must Price increase. For example, the Weilai ES8, the state subsidy for this model will be reduced from the original 22,500 yuan to 18,000 yuan, and it will be much later to pay." The sales staff told reporters.

When asked how to solve the problem of shortening the cruising range in winter, the staff member said, “We mark the 600 km model, and turning on the air conditioner in winter can probably maintain 50%-60% of the endurance. Shortening of the cruising range in winter is a common situation in the industry, but The battery swap mode adopted by NIO can be fully charged within five minutes, which can solve the user’s battery life anxiety to a certain extent."

Despite Weilai’s statement, from the user’s response, on Weilai App, major car forums, and second-hand trading platform Xianyu, many users transferred the original large amount of 20,000 yuan at a low price, and some users even The lowest price is 40% off, and it will cooperate with Weilai's official sales to complete the transfer order, and the deadline for picking up the car is in January 2021.

Recently, He Xiaopeng said in the circle of friends: “This time we are very confident that friends will cut prices on New Year’s Day. We have not even opened an internal telephone conference. The data has fully proved that the price reduction has proved to be only a marketing method, and it must be a double Bladed sword."

"As long as we can pick up the car in the first quarter, we will follow the 2020 subsidy standard, and Xiaopeng will bear the cost of the decline. The average cost can be several thousand yuan, so it is best to pick up the car as soon as possible." Mr. Song, the sales director of Peng Auto Experience Store, told reporters.

Tesla, the "mountain" in front of new car-building forces

No matter how you look at it, Tesla is a big mountain in front of new car-building forces.

During the reporter’s visit, it was discovered that even though it was a working day, there was still an endless stream of customers coming to see the car in the Tesla store, and they needed to wait ten minutes to talk to the staff. However, in the stores of Weilai and Xiaopeng, The door can be a bird.

Even if the three are added together, it is only about one-fifth of Tesla's.

In the capital market, the two parties are also not at the same level.

Cui Dongshu, secretary-general of the Travel Federation, is also optimistic about Tesla's trend.

"SUVs are very popular in the Chinese market. Model Y may sell better than Model 3 in China, and Tesla's sales this year are expected to reach 300,000."

Zhang Xiang, an automobile analyst, believes that “Tesla’s price play is savage, but it is like that catfish. Putting it into the pool of the Chinese market can actually force domestic auto companies to survive the fittest, and it will affect the entire new energy industry. The development of the car market may not be a bad thing."

In the view of industry insiders, Tesla may continue its price reduction strategy.

Tianfeng Securities pointed out in a report that with the advancement of battery technology and the large-scale application of low-cost LFP (lithium iron phosphate batteries), it is expected that the entry price of Model Y is expected to drop to 275,000 yuan. If the localization of Tesla is considered With further improvement and continued decline in battery prices, the entry-level Model Y may drop to less than 250,000 yuan.

In addition, Tesla's Model 3 and Model Y have been included in the catalog of new energy vehicles exempted from vehicle purchase tax by the Ministry of Industry and Information Technology.

In addition to tax exemption, if the entry price of Model Y drops to 300,000 in the future, it will be able to enjoy further subsidies for new energy vehicles.

Weilai CEO Li Bin also believes: "According to Tesla's style, after the production capacity keeps up, the price will drop. In the future, Model Y may continue to reduce prices, and Tesla's starting version may drop to more than 100,000. "

At the NIO second-hand car business conference on January 3, Li Bin said: “Tesla’s goal is to become a Volkswagen Ford, NIO sticks to its high-end positioning. How much BMW, Mercedes-Benz and Audi petrol cars are sold at the same price. From this statement, in the face of aggressive Tesla, Weilai may still choose to "not follow."