Police officer injured in clashes at Capitol Hill has died

Constable Brian Sicknick "was injured in physical contact with the protesters," Capitol Police said. Taken to the local hospital he succumbed to his 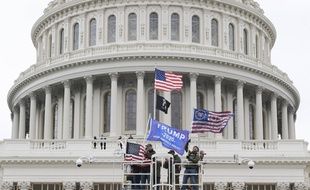 Supporters of Donald Trump in front of the Capitol in Washington on January 6, 2021. -

A police officer died of injuries sustained in clashes with supporters of President Donald Trump when they broke into the Capitol in Washington on Wednesday, police said Thursday evening.

Constable Brian Sicknick "was injured during physical contact with the protesters," Capitol Police said in a statement.

“He returned to his quarters and collapsed.

He was taken to the local hospital where he succumbed to his injuries ”Thursday evening, the statement said.

Brian Sicknick had worked for this police service for 12 years.

Images that will mark history

Four protesters died during these incidents, including a woman hit by a bullet fired by the police.

For the other three deaths, the circumstances have not yet been clarified.

Believed to be a mere formality, the certification of Joe Biden's victory by the two houses of Congress meeting in extraordinary session turned into "insurrection", "almost sedition" in the words of the president-elect, when a crowd of supporters of the outgoing president invaded the Capitol, interrupting the debate.

The images taken from inside the majestic building will mark history: elected officials wearing gas masks, plainclothes police officers with guns in hand, demonstrators in the offices of parliamentarians.

These scenes aroused consternation and indignation across the world, and the image of the United States, which readily poses as a democratic model, has been permanently damaged.

Heavily criticized for his lack of anticipation, Capitol Police Chief Steven Sund has tendered his resignation.

In the aftermath of this day of chaos which shook America, Donald Trump, accused by Joe Biden of having undermined democracy, launched a rare call for “reconciliation”, condemning “an odious attack” on the Capitol.

In a video that marks a clear change of tone, the Republican president said he was "scandalized by the violence" to which a few hundred of his supporters have engaged.

"I will now focus on an orderly and smooth transition of power," he said.

Violence in Washington: How pro-Trump rioters managed to break into the Capitol