How Denmark managed to get additional vaccines from the EU quota - STM: Finland ordered more this week

The Ministry of Social Affairs and Health is responsible for criticizing Finland for “falling asleep” in vaccine purchases. 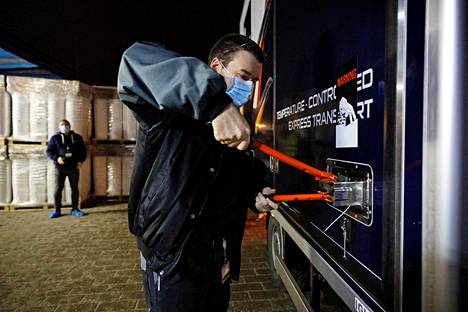 Denmark received 2.6 million “extra” doses of a coronavirus vaccine developed by German BioNTech and Pfizer in the United States over Christmas.

When two injections are given, an extra supply is enough to vaccinate 1.3 million Danes.

The Danes did not bypass the European Union's joint procurement mechanism.

The Danish health authorities ordered vaccines from a quota that other EU countries had not used.

In addition to the “extra” procurement, Denmark will receive its proportionate share of the Pfizer vaccines purchased through the joint procurement mechanism.

"If all goes according to plan, we can get the majority of the adult population vaccinated before summer is over," Thomas Senderovitz, director of the Danish Medicines Agency, told Danish radio on Monday.

Among EU countries, Estonia has also purchased additional vaccines from the EU pot.

- Many countries have used this opportunity, but for some reason Finland has not seized it, which of course is a little surprising, Lehtonen commented to IS.

The vaccine market is in a turmoil anyway.

The EU announced on Friday that it had agreed to purchase an additional 300 million doses of BioNTech / Pfizer vaccine.

Tuija Kumpulainen, Head of Department at the Ministry of Social Affairs and Health, denies allegations that Finland is “falling asleep” in vaccine purchases.

Here's how Kumpulainen opens the vaccine situation for IS:

- We are obliged by the EU's commitment not to disclose exact order quantities, nor should there be any such publication in the media.

At a general level, we can say that Pfizer's vaccines have had an “original” autumn base order, from which Finland will receive 2.6 million vaccines this year.

We ordered 6.6 million at the time, but there were so many distributors that it didn't materialize, Kumpulainen commented to IS by e-mail on Friday.

- At the end of December, an additional 1.2 million servings have been ordered.

And an additional order has been placed earlier this week, with the goal of reaching that fall’s original order quantities.

Its (additional order) is being processed on the EU side.

According to Kumpulainen, delivery times for additional orders for Pfizer's vaccine are mostly in the second half of the year.

A marketing authorization for a viral vector vaccine developed by the University of Oxford and the pharmaceutical company AstraZeneca, which is better suited for mass vaccinations, is still pending.

- I do not consider it sleeping that we have ordered that 1.2 million, or almost 50% more, from that lot at the end of December on top of the maximum amount received in the autumn.

Plus a week later, when the schedule of AstraZeneca, for example, is unclear, Kumpulainen reports.

The public has not been told how quickly Pfizer will be able to deliver the additional vaccines to Denmark.

According to Ekstrabladet, the state-owned Statens Serum Institut said Denmark hopes to receive half of the extra batch - or 1.3 million servings - by next summer.

The EU Commission has negotiated joint procurement agreements on behalf of the member states.

According to him, member states do not negotiate in parallel and do not conclude parallel agreements.

According to Husin Lasse Lehtonen, the Commission should then also be able to inform the Member States of delivery schedules.

- From a practical point of view and from the point of view of carrying out vaccinations, it would be good to know how much and when vaccines will come.

Arranging vaccinations is extremely difficult, if it is a trade in numbers, Lehtonen thinks.

- It's a little hard for me to believe that someone wouldn't know.

Yes, I guess Pfizer knows roughly how much it can produce, who has ordered it, and in what order it delivers.

There will be a bit of a feeling of not wanting to tell if vaccines go outside European countries.

Who should be blamed for the confusing situation?

According to Lehtonen, at least the EU is concerned about the poor control of its interests and keeping the member states in the dark about the implementation of procurement delivery schedules.

- In part, of course, it should also be the task of Finnish politicians and officials to ensure from the Commission that information is made public.

Or we have to say directly that we don’t know.

Why, then, do EU countries have “extra” vaccines that they do not want to redeem?

Some of them are so-called options, ie they have a quota within which to move, says STM's Kumpulainen.

This was the case with the Danish acquisition, and apparently also with the Estonian acquisition.

- In addition, there are clear subsequent additional orders that use the terms and prices of the contract, but which no longer have the upper limit of the pot, Kumpulainen reports.

- When moving within a 'pot', countries can take the basic proposal, opt out altogether or take less.

And try to order more, which will succeed if other countries do not take.

There can be several reasons for the accumulation of “surplus”, such as the cold chain and prices.

The Netherlands launched a vaccination program on 6 January, the last member of the EU. Photo: PIROSCHKA VAN DE WOUW / Reuters

The storage and transport temperature of Pfizer vaccine -70 degrees Celsius can be challenging for some EU countries.

Among other things, Bulgaria did not procure freezers for freezing vaccines until December.

Some EU countries may have chosen to wait, at least in part, for a logistically easy Oxford / AstraZeneca vaccine.

The Netherlands, on the other hand, has not even started vaccinations properly.

There is a family doctor system where vaccinations are given in small clinics and it takes time to arrange the logistics.

The situation is similar in Belgium.