Did the missionaries of the Mormon Church build Finland's tallest snowman in Savonlinna? "Do longer if you dare"

Young missionaries from the United States and Denmark built joy in the midst of coronation discipline. 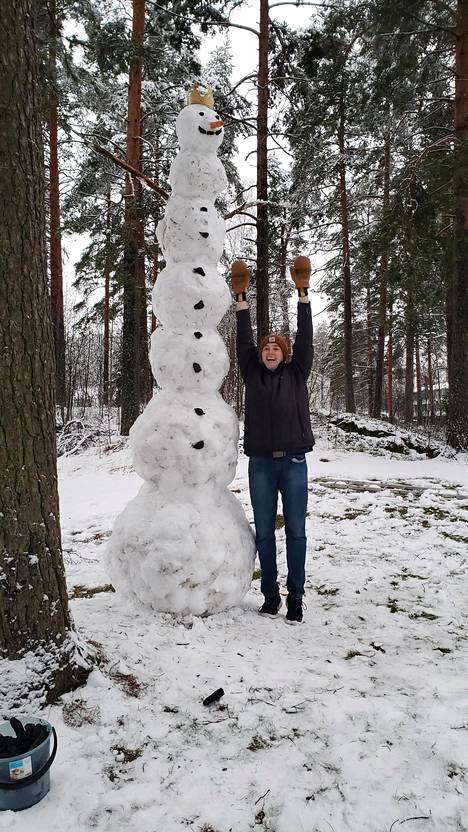 Martin Fredberg, 26, from Denmark, and Spencer Jeffries, 20, from Oregon, USA, built a snowman as long as 12 feet in Savonlinna in early January.

- This is our contribution.

Make a longer snowman if you dare, the men will challenge the Finns to the competition for the longest snowman in their update to Facebook.

The young men are missionaries for the Mormon Church in Finland.

Fredberg came to Finland last spring, Jeffries only at the end of the year.

Both are in Finland for the first time, but have already fallen in love with our country, its nature and people.

- There are trees here that are green even in winter, says Fredberg about his findings.

Jeffries, on the other hand, has fallen in love with Finland's lake nature, although he has never seen it in its summer splendor.

They are recognized by their neat dark suits, white shirts, ties and polite demeanor.

They do missionary work door-to-door and meeting people wherever they move.

The work of the missionaries is full-time, they have no real time off.

The corona era has also made their work new.

Missionary work is now done online, including on Facebook.

How does it relate to the work of a missionary?

Is it done during working hours or after free time?

- Not only do we share the gospel message in missionary work, we want to help people and bring them joy.

The snowman was specifically meant to make people happy.

I said this good news, like the good news of the gospel, we want to convey to people through Facebook.

It took the men three hours to build the snowman.

- Jeffries is taller than us, and when he was no longer reached, a ladder was used to help, Fredberg said of the construction project.

The 12-foot-tall, more than 3.6-foot-tall snowman had a carrot on his nose and charcoal on his head, but as a headdress it got a golden crown instead of a top hat.

Pictured is one of its creators, Spencer Jeffries. Image: Martin Fredberg

Even a half-length snowman made by Martin Fredberg (left) and Spencer Jeffries a week ago was taller than his builders. Photo: Launo Päivätie

Although the creators of the snowman are not Finns, they knew how to build a real Finnish snowman.

There are seven balls on top of each other in the snowman, the buttons on the suit are real coals and the nose is a carrot, as it should be.

They could not find a black top hat in the church of their congregation, and so a crown made of gold paper was placed to adorn the snowman.

They did not know the origin of the crown, nor could they tell it any more.

However, the crown probably comes from the sages of the East, in whose memory the Epiphany was celebrated in Finland on Wednesday - and also in the Church of Jesus Christ of Latter-day Saints.

The shelter had already wreaked havoc and toppled a twelve-foot-high snowman built by Spencer Jeffries (left) and Martin Fredberg a week ago.

As an Epiphany, they tried to reassemble it, but with poor success. Photo: Launo Päivätie