Conspiracies, pro-arms, neo-Nazis: who are the rioters on the Capitol?

Richard Barnett, Jake Angeli, Matthew Heimbach, Adam Johnson ... Their photos went around the world on Wednesday. Who are these pro-Trump activists who wreaked havoc on the US Congress? 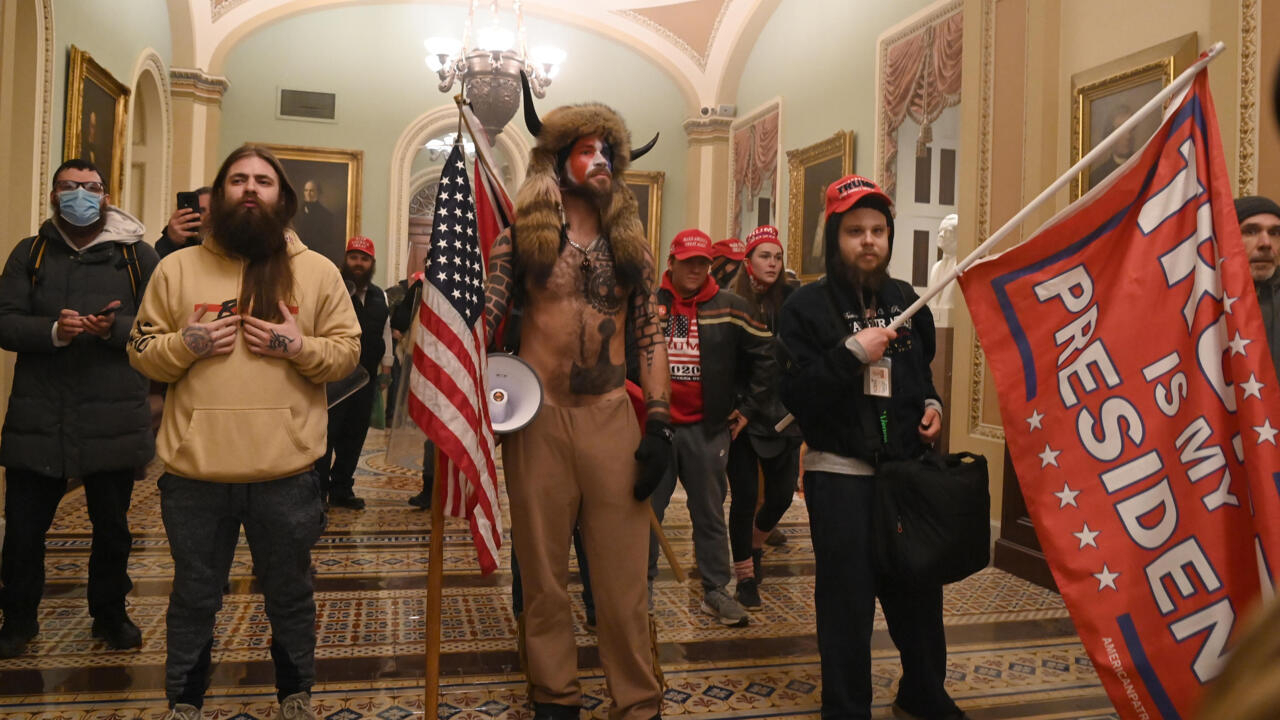 Their faces have been around the world since their assault on the Capitol on Wednesday January 6, photographed with their feet on the desk of an elected official, parading with a Confederate flag or sitting at the office of the President of the Senate.

Who are these supporters of Donald Trump, doped by his rhetoric to the point of sowing chaos within the confines of the US Congress?

Many have now been identified, including the woman fatally injured when the violence began.

Here are the main elements collected on each of them, mostly active on social networks.

>> To read: The extreme escalation of the American right

Coming from Arkansas, this 60-year-old with a strong Southern accent invited himself into the office of Nancy Pelosi, leader of the Democrats in the House of Representatives.

It's "my office," he told local KFSM 5News on Wednesday.

Known locally for hosting a pro-gun Facebook group, 2A NWA STAND, Richard Barnett, nicknamed "Bigo," claimed to have found himself in this office almost by accident.

Before leaving, he left an insulting note with Nancy Pelosi.

Last I heard, he was free, although he could be arrested quickly.

"Am I scared? No! But jail is a possibility," he told reporters after leaving the building.

Night of chaos at the Capitol: who are the groups involved in the violence?

Shirtless, Native American headdress with buffalo horns, make-up, the "spiritual warrior", as he describes himself, has magnetized photographers and cameras to the four corners of the Capitol.

Originally from Arizona, this thirty-something has already been seen many times during pro-Trump protests in Phoenix in recent months, systematically wearing his famous headdress.

He presents himself as a "digital soldier of QAnon", the conspiratorial movement of which Donald Trump is the hero and which saw Wednesday's intrusion as a triumph.

"We are patriots, on the front lines in Arizona, who want to bring our positive energy to (Washington)," he wrote in a message published in December on the darling ultra-conservative social network Parler.

>> To read: Donald Trump condemns the attack on the Capitol and promises a smooth transition

Photographed alongside Jake Angeli, the round-faced, 29-year-old surrounded by rimless glasses is considered by the Southern Poverty Law Center, an observatory of extremist groups, to be "the face of a new generation of white nationalists ".

He is considered one of the organizers of the far-right rally in Charlottesville, in August 2017, on the sidelines of which a woman was killed by a neo-Nazi sympathizer.

>> To read: After the intrusions on the Capitol, security in question in Washington

Surprised carrying Nancy Pelosi's desk, the thirty-something in the Trump cap spontaneously made a friendly sign to the photographer, all smiles.

He was quickly identified as Adam Johnson, a resident of Parrish, Florida, according to local press.

In the immediate future, it was more his wife, a doctor, who bore the brunt of the break-in, inundated with sarcastic messages on the many sites on which she is referenced.

She was the first known victim of this violence: while trying to pass through a broken window in a hallway of Congress, the thirty-something received, at close range, a bullet fired by a police officer from the Capitol.

She later succumbed to her injuries.

Active on social networks, conspiratorial, this Californian "libertarian", according to her Twitter account, saw the surge of supporters of Donald Trump on Washington as a "storm", which would bring the country "from darkness to light" .