Where did Melania Trump disappear? The first woman has been silent about the turmoil in Washington

No glimpse of Melania Trump has been seen during the congressional demonstrations. He has also remained silent on social media. 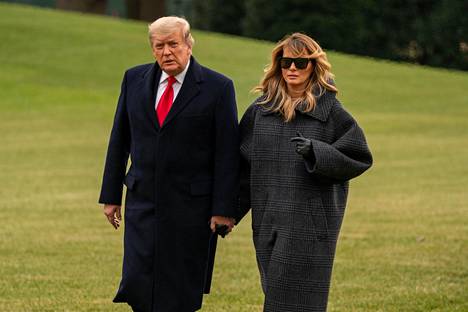 Melania Trump, the first woman in the United States, has stayed out of the spotlight in Washington in the midst of chaos.

Ms. Trump has not taken a stand on the riots in the U.S. Congress, and her whereabouts are unknown.

Where President Donald Trump has been tweeting diligently over the past day and has even been shut out of somehow service for 12 hours, his wife has excelled in his absence.

Melania’s latest tweet was released almost a week ago on January 1st and she wishes everyone a Happy New Year.

President Trump spoke to his supporters in Washington on Wednesday before they marched to take over the congress building.

Melania Trump was not seen at the event, but has remained visibly out of publicity throughout the chaotic day.

Trump moved back to the White House from the opportunity, but the whereabouts of the first woman are uncertain.

Later, after the situation got out of hand, in a recorded speech, President Trump urged his supporters to return home and respect the police, but also reiterated his claims of his stolen election and claimed he had won it.

Twitter soon deleted the video because it contained incorrect information.

Melania Trump is known to remain silent about her husband’s statements and has had little say in matters over the past four years.

Nor has he commented in any way on the escalation of Trump supporters in Washington.

On Thursday, it was reported that a real wave of resignations began in the White House as a result of the events of Congress, when several key figures in the Trump administration left office.

One of those who resigned was Stephanie Grisham, Melania Trump’s Chief of Staff, Advocate and Trustee, who has also previously served as White House Communications Manager.

Grisham has not commented on the reason for his resignation, but because of the timing, it is considered a protest for Trump.

Nor has the White House commented on the departure of the first woman’s important employee.

Melania Trump has also remained silent about her employee’s resignation.

Twitter has wondered during Thursday where Melania Trump has disappeared and why she is not taking a stand on the chaotic events in the United States.

- WHERE IS MELANIA TRUMP?

one user asked the White House and Melania herself for an answer.

I suspect he’s not in DC, another stated.

So far, little is known about Melania Trump’s recent efforts and plans after her husband’s presidency.

The first woman is suspected of looking forward to leaving the White House behind and returning to her old social life in New York.

On the other hand, it has been argued that the atmosphere in New York would be so anti-Trump that Melania might no longer feel comfortable in the city.

He has also been entrusted with moving to Florida’s lavish Mar-a-Lago mansion with his wife.

According to the wildest rumors, Melania might even file for divorce from Trump and continue her life far away from her husband.