Did you answer WhatsApp's question in the affirmative? You accepted all this

WhatsApp will start sharing more information with Facebook, and users will have the option to let Facebook break its promise or stop using the service. 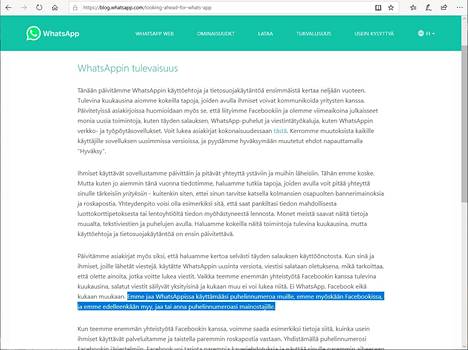 If you do not accept them, WhatsApp will expire on February 8th.

According to Ars Technica and PCMag, this is a significant change in the way WhatsApp shares information with Facebook.

According to news services, WhatsApp is now forcing the sharing of, among other things, the phone number, profile name and photo of the parties with whom the user has been in contact and the payments made in the app.

WhatsApp is very vague about what exactly the changes are and how the information provided will be used.

However, conditions appear to be more severe in the rest of the world than in the EU.

The promise is equally readable on the WhatsApp blog.

This is not the first time Facebook has resorted to questionable means of obtaining people’s phone numbers.

The second year revealed that Facebook is angling people’s phone numbers in three different ways without their knowledge and use without their consent.

WhatsApp has already decided to start releasing the data to Facebook, which bought the instant messenger in 2014 for $ 13.8 billion.

In 2016, WhatsApp began sharing Facebook phone numbers with Facebook, contrary to the promise not to do so.

This could then be refused.

According to WhatsApp, the change is now about communicating with companies and their ability to store and manage chats within Facebook.

According to the representative, nothing will change about how WhatsApp shares information about other chats or account information.

It remains to be seen whether the expanding sharing of information is now limited to corporate chats.

It could be the first step in breaking down the wall between WhatsApp and Facebook more widely later.

On the other hand, it is also unclear to what extent European users will be affected by the changes.

WhatsApp requires you to accept the new terms of use or the app will expire in a month.