After the Biontech / Pfizer vaccine, the preparation of the US company Moderna may in future also be used in the EU. Where are there differences and where are there similarities? 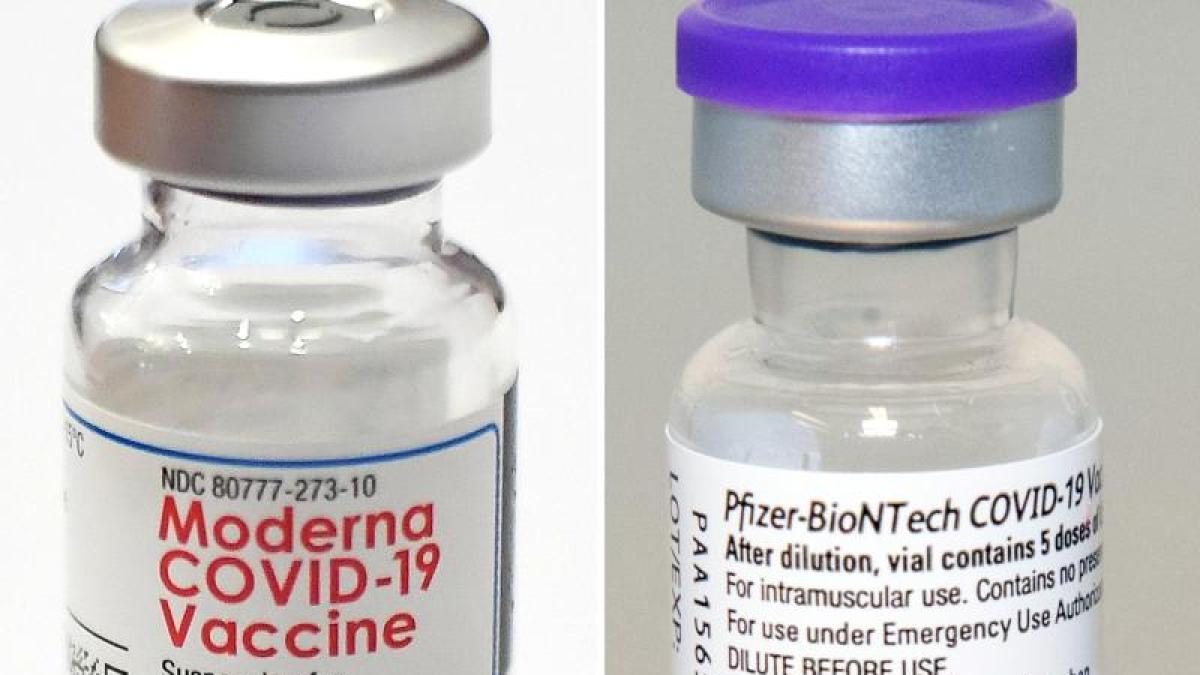 Berlin (dpa) - Green light for the second corona vaccine: After the conditional approval for the Biontech / Pfizer product, the European Commission has also given the vaccine from the US manufacturer Moderna such approval.

Where do the vaccines differ and where do they have in common?

Both agents are so-called mRNA vaccines.

No vaccine of this type had previously been approved for humans.

With the mRNA, the vaccines contain the assembly instructions for a component of the Covid-19 pathogen.

On this basis, the body's cells produce the virus protein.

The body develops its immune response against this.

The mRNA is not incorporated into the human genome.

Both vaccines have so far achieved high levels of effectiveness.

The US company Moderna announced in late November that its vaccine had an effectiveness of 94.1 percent - measured 14 days after the second dose.

The Pfizer vaccine showed almost identical effectiveness of 95 percent - here it was seven days after the second dose.

The numbers refer to the phase 3 studies carried out to date.

It remains to be seen in a few months whether these numbers can also be achieved with massive use of vaccines.

It is also unclear how long the vaccinations protect exactly and whether the vaccinated person can still pass the virus on.

Experts are optimistic that the vaccinations will also work with the coronavirus variant B.1.1.7, which was discovered in Great Britain and is considered to be particularly contagious.

Here, too, there is great agreement.

Both the Biontech / Pfizer and Moderna vaccines require two doses of active ingredient.

At Biontech / Pfizer, the patient is given a dose every three weeks.

It takes around four weeks for the Moderna product.

The Biontech / Pfizer vaccine must be diluted with a sodium chloride solution before injecting.

Each dose contains 30 micrograms of vaccine.

The Moderna product, on the other hand, is supplied ready-to-use and, at 100 micrograms, contains around three times more vaccine per dose.

The active ingredient can stay in the muscle for a few hours, giving the body time to recognize it and react, explains Rostock virologist Andreas Podbielski.

Around 44,000 participants took part in the phase 3 study by Biontech / Pfizer, and around 30,000 at Moderna. Regardless of the preparation, many study participants reported pain at the injection site, fatigue, and headache and muscle pain.

Some also suffered from fever and chills.

In general, the side effects were mild to moderate and resolved after a short time.

With both vaccines, the side effects occurred more often with the second vaccine dose.

There were more side effects compared to flu vaccines.

Moderna's is intended for ages 18 and up, although the company recently started testing its vaccine in 12-17 year olds.

According to the Robert Koch Institute, a vaccination recommendation for children is “not yet foreseeable”.

There is agreement on who should not be vaccinated.

The vaccine from Biontech / Pfizer must be stored at minus 70 degrees.

The preparation can be transported for up to 15 days in specially developed shipping boxes.

There are also differences after thawing: The Pfizer vaccine can be stored in the refrigerator, but must be used within five days.

Both vaccines must be used within six hours of first use.

One vial is enough for five to a maximum of six doses at Biontech / Pfizer, and ten at Moderna.

How expensive are the vaccines?

The prices for the new mRNA vaccines from Biontech / Pfizer and Moderna are probably many times higher than those of conventional products such as those that Astrazeneca wants to bring to the market.

Accordingly, a dose of the Moderna vaccine should cost the equivalent of around 15 euros, one from Biontech / Pfizer 12 euros, and one from Astrazeneca only 1.78 euros.

300 million cans have been ordered from Biontech / Pfizer this year.

According to the Federal Ministry of Health, Germany receives over 85 million vaccine doses.

Negotiations are in progress with the manufacturer about additional deliveries.

Moderna wants to produce around 600 million vaccine doses in 2021, of which the EU has currently secured 160 million.

Germany will receive two million doses in the first quarter of 2021 and a total of 50 million for the full year, said Federal Health Minister Jens Spahn (CDU).

That means: The current approval should not eliminate the existing shortage, at least not in the short term.

Astrazeneca's vaccine could be next in line in the EU, as in the UK.

According to experts, its approval in the EU (400 million doses) would be a big step forward.

In contrast to Biontech / Pfizer and Moderna, a normal refrigerator temperature is sufficient for at least six months of storage with the inexpensive vaccine.

Definition of ribonucleic acid at "chemie.de"

Biontech on the corona vaccine

FDA leaflet on the Biontech vaccine

Biontech on side effects

FAQ of the RKI with vaccination recommendations for children

Report on the deleted tweet by the Belgian State Secretary (December 18, 2020)