China News Service, Chongqing, January 5 (Luo Yonghao) The Yangtze River flows for nearly 700 kilometers in Chongqing, and it meets the Jialing River and Wujiang River. As a strategic reserve of China’s important freshwater resources and an important ecological barrier in the upper reaches of the Yangtze River, Chongqing’s ecological environment is related to the conservation of 35% of the count 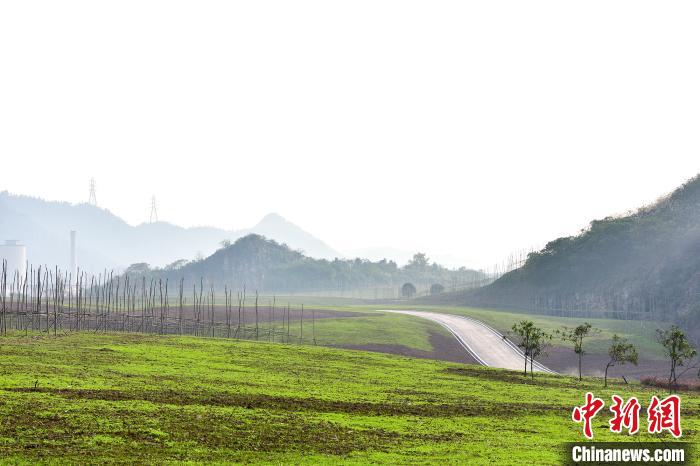 As a strategic reserve of China’s important freshwater resources and an important ecological barrier in the upper reaches of the Yangtze River, Chongqing’s ecological environment is related to the conservation of 35% of the country’s freshwater resources and the drinking water safety of more than 300 million people in the middle and lower reaches of the Yangtze River.

From "big development" to "big protection", greening the ecological background of the Yangtze River

In early November 2020, the largest migratory population of red-headed gulls was observed in the Chongqing section of the Yangtze River in the past decade.

Flocks of red-headed gulls appeared in many waters, attracting a large number of citizens to check in and take pictures.

Some experts believe that this may be closely related to a series of measures to restore the ecological environment in the Yangtze River Basin in recent years.

Located between Chongqing Mingyue Mountain and Tongluo Mountain, Guangyang Island is the largest green island in the upper reaches of the Yangtze River.

In 2006, Guangyang Island was listed as a key development target, and the planned real estate volume on the island once reached 3 million square meters.

The idyllic scenery on the island was quickly covered by the ongoing engineering construction.

For a while, "Lakeside Villas", "High-end Hotels", and "Chongqing's'Long Island'" became the promotion labels of Guangyang Island.

When the reporter revisited Guangyang Island at the end of 2020, the water was gurgling, the winter plum was fragrant, and the reeds swayed in the wind, creating an ecological picture of the harmonious coexistence of man and nature.

From "big development" to "big protection", the transformation of Guangyang Island originated from the development of real estate on the island in Chongqing in 2018. It was decided to carry out ecological restoration and build an ecosystem of mountains, rivers, forests, fields, lakes and grasses.

The reporter visited the districts and counties along the Chongqing section of the Yangtze River and found that ecological protection and green development have been placed in a more prominent position. Chongqing is speeding up the construction of a beautiful place with a brand-new development concept.

The picture shows the closed mining area of ​​Nanshan in Chongqing turned into a green ecological park after restoration.

Chongqing has 39 out of 41 major industrial categories in China, and it is worthy of its name as a “manufacturing town”.

Chongqing, which has a solid manufacturing foundation, is focusing on high-quality, supply-side, and intelligent, exploring the path of high-quality development of industrial transformation and upgrading. The "intelligent manufacturing town" and "smart city" are becoming Chongqing's new business cards.

The reporter learned from Liangjiang New Area that, as the main position of Chongqing's digital economy, the output value of strategic emerging manufacturing and high-tech industries in the area accounted for more than 50% of the industrial output value.

There are more than 5,000 registered enterprises in Liangjiang Digital Economy Industrial Park.

The BOE (Chongqing) Smart System Innovation Center project has started construction in Lijia Smart Park in Liangjiang New District. In the next five years, it will introduce more than 5,000 high-level R&D talents to Chongqing and cultivate more than 100 innovative projects.

At present, 30 top universities, research institutes and scientific innovation teams have settled down, including the National University of Singapore, Beijing Institute of Technology, and Shanghai Jiao Tong University.

It is estimated that by 2022, Liangjiang Collaborative Innovation Zone will complete 100 technological achievements transformation.

Chongqing's traditional industries are constantly transforming and upgrading around green and technology.

The reporter visited the digital production workshop of Chongqing Fuling Mustard Group, the only listed company in the pickle industry in China, and saw that a series of intelligent production processes replaced manual operations.

It is worth mentioning that the company is the first in the industry to explore the introduction of MVR technology to evaporate and crystallize the salt in the brine of mustard tuber to form concentrated brine and clear water for recycling.

It not only solves the problem of salting wastewater discharge, but also saves production costs.

The picture shows the gurgling water of Guangyang Island, the fragrance of winter plums, the long grass of reeds and streams swaying with the wind, stretching out a beautiful green ecological picture.

From "fisherman" to "fisherman", fishermen went ashore to protect the Yangtze River and recuperate

The Yangtze River has a unique ecosystem that has nurtured abundant aquatic biological resources and nurtured generations of people who depend on fishing for their livelihoods.

For a long time, affected by high-intensity human activities such as water pollution, overfishing, sand and quarrying, the Yangtze River's rare and endemic species have continued to decline, and economic fish resources are nearly exhausted.

The aquatic life reserve (aquatic life nature reserve and aquatic germplasm resource reserve) in Chongqing has been fully banned from 0:00 on January 1, 2020.

At present, the city has established 5,342 fishing boats and 10,489 fishermen, all of which have been reclaimed and landed ashore.

After the fishermen go ashore, they either engage in agricultural production, or start their own businesses, or go out to work, or become "fishermen".

Fishing, eating fish, running catering fish boats...Song Bin, a fisherman who has lived on the river for nearly 20 years, is now the owner of a fish restaurant on Beibin Road.

He told reporters that now the business of his fish restaurant is booming. "One to three meters of river water has become crystal clear." The resistance and confusion when he first "landed" was gone.

Cheng Yongbin, a fisherman who went ashore as a "fisherman", is no longer driving a fishing boat, but a patrol boat to fight illegal fishing.

Zhang Yonggang, a fisherman born and raised on Guangyang Island, became an ecological security guard for the island.

"In the past, we used to "rely on the sky for food," now we are protecting the mother river." To his delight, as management practices and people's awareness of ecological and environmental protection have increased, fishing, pheasant hunting, and other phenomena that have been commonly found before have become less and less.