India approves two vaccines against "Corona" ... and the countries of the world are dealing with a new boom

Yesterday, India agreed to the emergency use of two vaccines against the emerging corona virus, which paves the way for one of the largest vaccinations in the world, at a time when the European Union offered to help pharmaceutical companies increase their production to overcome the distribution crisis, this comes with surpassing Coron infections 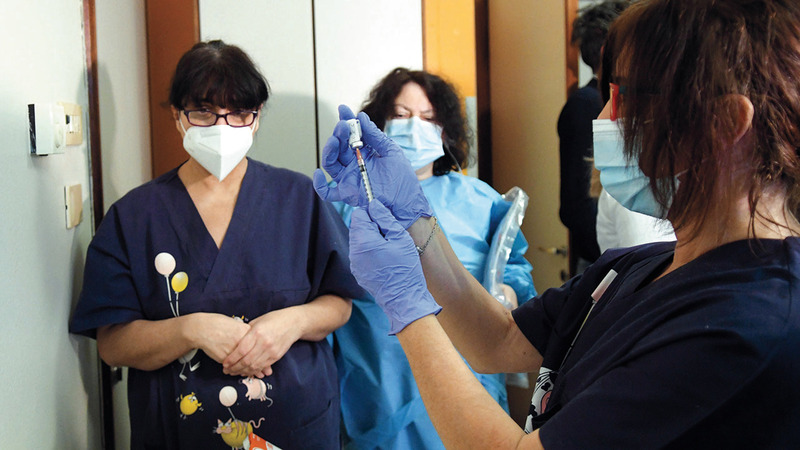 India approves two vaccines against "Corona" ... and the countries of the world are dealing with a new boom

Vaccination operations against Corona with the Pfizer vaccine in a hospital near Milan, Italy.

Yesterday, India agreed to the emergency use of two vaccines against the emerging corona virus, which paves the way for one of the largest vaccinations in the world, at a time when the European Union offered to help pharmaceutical companies increase their production to overcome the distribution crisis. This comes with overcoming Corona infections. Global 84.08 million cases, 1.8 million deaths.

In detail, India, the second most affected country by the epidemic, agreed to use the doses of the vaccine developed by the "AstraZeneca" company and the University of Oxford, as well as the vaccine for the local pharmacy company, Bharat Biotech, according to what the Indian Medicines Regulatory Authority announced.

The Serum Institute of India (India Serology Institute), the largest vaccine manufacturer in the world, has announced that it is producing between 50 and 60 million doses per month of the AstraZeneca-Oxford vaccine, which is known to be cheaper than the Pfizer-Biontech vaccine, and is more accessible in terms of Storage and transportation.

India has set an ambitious goal of vaccinating 300 million of its 1.3 billion people by mid-2021.

Countries around the world hope that the deployment of vaccines will lead to the control of the "Covid-19" epidemic, which has infected 84.6 million people and killed more than 1.8 million, since its first appearance in China more than a year ago.

However, there is a shortage in the production capacity of the vaccine, according to what the chief health official in the European Union announced, and offered to provide assistance to pharmaceutical companies, amid concern about the speed of vaccination operations throughout Europe.

The European Commissioner responsible for health, Stella Kyriakides, told the German news agency, that "the situation will gradually improve" with the publication of vaccines.

While it seems that the production of vaccines and the application of large vaccination programs will take months, countries have tightened restrictions to curb a new surge of the virus, at a time when experts expected a sharp rise in the number of infections, after weeks of family meetings during the New Year holidays.

From imposing a local curfew, to a ban on selling, and putting in place a complete lockdown, governments are trying to tackle the soaring number of infections.

In Bangkok, the nightlife has stopped after a ban on bars and clubs and the sale of drinks in restaurants, among a group of measures aimed at stopping the high number of infections after an outbreak of the virus in a fish market, last month.

It is also expected to close public schools in the Thai capital for two weeks.

In Tokyo, the city governor asked the Japanese government to declare a new state of emergency, at a time when the authorities are fighting a third wave with a record number of new infections.

As for South Korea, it has extended measures to reduce the virus until January 17, in the greater Seoul region, including a ban on gatherings of more than four people, and it will be expanded to cover all parts of the country.

In the United States, the deployment of the vaccine suffered a setback for logistical reasons, in a country most affected by the virus, with more than 20 million infections and 350,000 deaths.

In Russia, the Minister of Health, Mikhail Murashko, said that more than 800,000 people had received the home-made vaccine, "Sputnik-V", confirming the distribution of 1.5 million doses throughout the country, which is about 147 million people.

During the past 24 hours, Russia recorded the lowest number of new infections with the new Corona virus, since late last November, by recording 24,150 cases, compared to 26,301 the previous day, bringing the total number of virus infections that were recorded in Russia to three million 236 thousand and 787 infections.

For its part, the French government has extended a two-hour night curfew in parts of the country to help efforts to tackle the virus, and the closure begins at six in the evening, especially in the east of the country, and Paris has so far avoided additional restrictions.

The new French restrictions came at a time when the police issued violations against more than 1,200 people, on Saturday, who participated in an illegal evening in the northwest of the country.

Violations were issued against 800 of them for violating measures to reduce the virus, and the Health Authority in Brittany warned of "a great risk of the spread of (Covid-19)" in the event.

On Saturday, Spanish police broke up a gathering near Barcelona that included 300 people who had been celebrating for more than 40 hours.

In Ramallah, the Palestinian Minister of Health, Mai Al-Keela, announced yesterday that 1,155 new cases of the Coronavirus and 31 deaths were recorded during the past 24 hours.

Meanwhile, a Reuters census showed that more than 84.08 million people were infected with the emerging corona virus worldwide, while the total number of deaths resulting from the virus reached one million and 831238 deaths, and virus infections were recorded in more than 210 countries and regions since the first cases were discovered. Infection in China in December 2019.

Russia records the lowest daily toll from Corona injuries in more than a month.

The United States sets a new record for daily injuries.