Tegnell: May a new wave come in Europe after the weekends

Despite the fact that the data during the weekends is deficient and difficult to assess, state epidemiologist Anders Tegnell believes that there may be another wave of infections from covid falls when the holidays are over. - We can see that unfortunately there are a number of countries in Europe that had a downturn but are on the way up again so there is a tendency that we will again get a new wave in Europe after the weekends 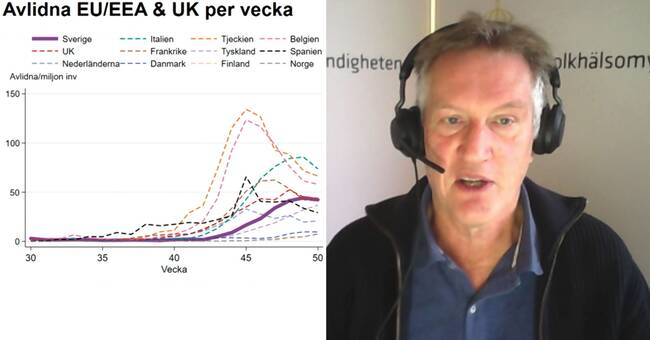 According to the latest data, it looks like the corona falls globally will be fewer, but due to the holidays during Christmas and New Year, the statistics are difficult to assess.

- In Europe we see a similar trend as we have seen before, after a big peak in September it went down for a while and now it is unfortunately on the way up, even if the last data is difficult to assess, says Anders Tegnell on Saturday press conference.

Most countries in Europe had a peak that was significantly earlier than in Sweden, around week 45. The Swedish curve has risen a little later, around week 50. According to Tegnell, Sweden is now at a level that can be compared with the average in Europe, and By all accounts, cases are increasing in European countries.

- We can see that it is unfortunately a number of countries in Europe that had a downturn but are on the way up again so there is a tendency that we will again get a new wave in Europe after the weekends here, if not the various efforts that we do have a much greater effect than they have had so far, says Anders Tegnell.

The deaths are, as usual, difficult to compare between countries and now an extensive delay can be seen in the statistics on the number of deaths.

The latest data for Sweden came on Wednesday, when 243 new deaths were reported and the total deaths with confirmed covid-19 landed at 8,727.

- Considering what the spread of infection looks like, we probably have to reckon with the fact that there will be a high number of deaths this and next week, says Anders Tegnell.