For the first time, the Russian Ministry of Defense published a photo of the Orion strike drone. On it, the UAV is demonstrated in desert camouflage and with suspended KAB-20 corrected aerial bombs as weapons. Earlier, Defense Minister Sergei Shoigu said that serial deliveries of Orion to the troops had already begun. Experts note that Russian attack drones will be in demand not only in the Russian army, but also abroad. 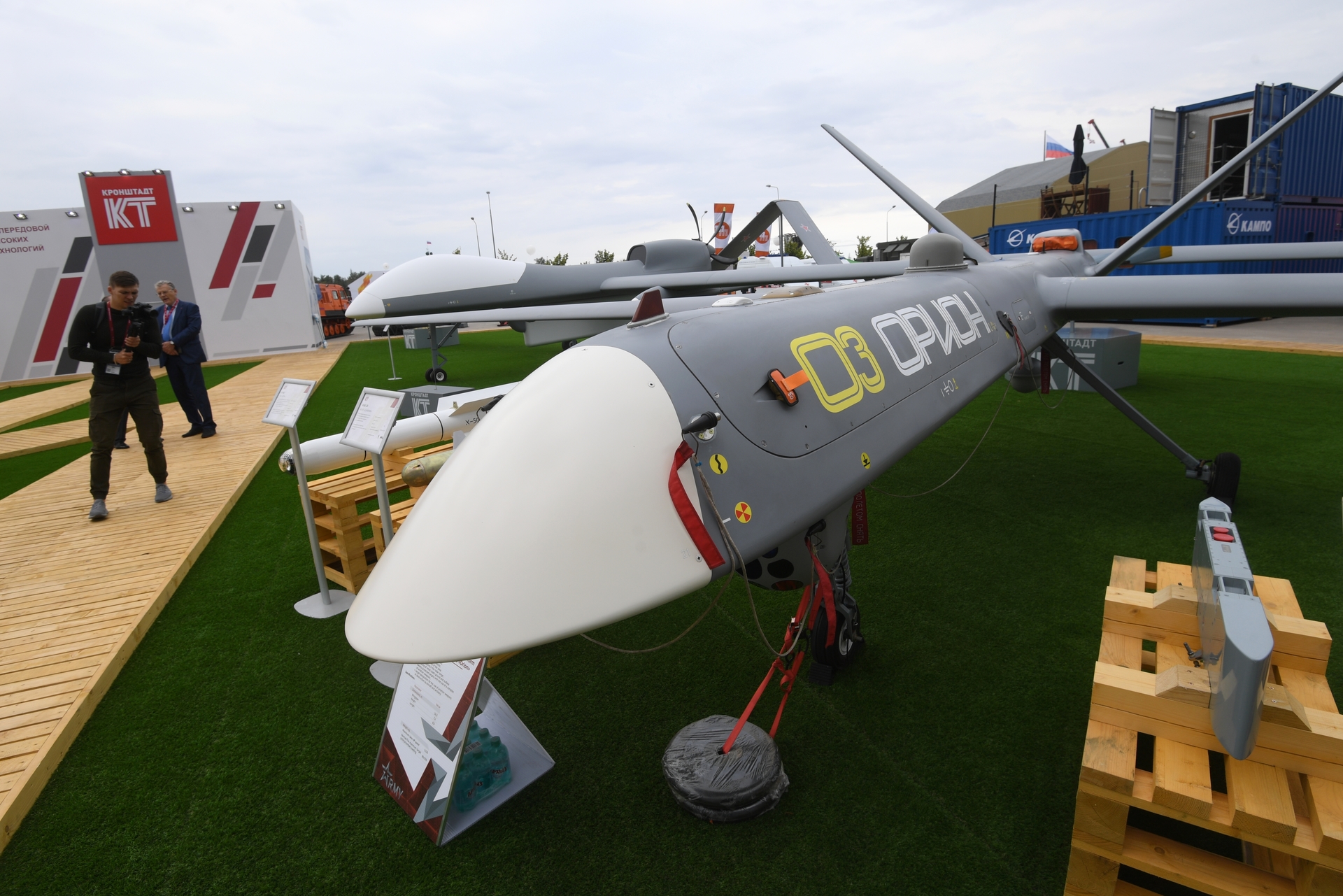 For the first time, the Russian Ministry of Defense has shown an official photo of the Orion strike drone.

It was published in the calendar for 2021, where other images of the latest Russian technology were also presented: the fifth generation Su-57 fighter, the Borey class submarine, the T-90M Proryv tank, and the Armata BMP.

In the photo "Orion" is shown in desert camouflage and with suspended KAB-20 corrected aerial bombs as weapons.

These are small-sized adjustable bombs weighing 21 kg, equipped with a high-explosive fragmentation warhead weighing 7 kg and satellite or laser guidance systems, they are designed to defeat enemy manpower and lightly armored vehicles.

The development of the Orion project by order of the RF Ministry of Defense began in 2011 by the Kronstadt group.

The first prototype was manufactured in 2015, after which its testing began.

The export version was presented at the MAKS-2017 air show.

Orion is a medium-altitude drone with a long flight duration - it can stay in the air for up to 24 hours.

The wingspan of the device reaches 16 m, the body length is 8 m, the ceiling height is 7.5 km.

In the bow of the Orion there is a surveillance and aiming equipment, and in the center of the fuselage there is a digital radio equipment, including a jamming station.

The Orion is equipped with an APD-110/120 engine developed by the Agat company with a capacity of 120 hp.

According to the developer, Orion is equipped with an optoelectronic system with television and infrared channels, a high-resolution digital aerial photographic complex, radar facilities and equipment for direction finding of radio emission sources.

In addition to the KAB-20 adjustable small-sized aircraft bombs developed by FSUE TsNIIHM, the drone can be equipped with a number of different aircraft weapons.

It was also reported at the Army-2020 forum that the Ministry of Defense and the Kronstadt group had already signed a contract for the serial supply of drones.

The first set was transferred to the troops for trial operation in April 2020.

On December 21, Russian Defense Minister Sergei Shoigu, at an expanded meeting of the department's board, said that the first Orion unmanned systems had already begun to arrive at the Aerospace Forces.

On December 28, the RIA Novosti agency, citing sources in the military-industrial complex, reported that Orion, during the tests, first conducted launches of guided small-sized missiles.

“As part of the ongoing tests of the weapons complex for unmanned aerial vehicles, the Orion drone conducted effective firing of guided missiles at ground targets at the test site.

Thus, this vehicle became the first Russian unmanned aerial vehicle to use this type of weapon, ”said the agency's source.

In addition, Orion has worked out the use of guided gliding bombs.

According to the interlocutor of RIA Novosti, the massive arrival of this UAV in the troops "will restore parity with a potential enemy in this class of equipment."

As military expert Alexei Leonkov noted in the RT commentary, such drones usually work deep in the operational-tactical theater of operations.

“First of all, it will be of interest to the ground forces as a unit that will track certain targets and destroy them with regular weapons.

KAB-20 ammunition has already been specially designed for it, and air-to-ground missiles will appear in the near future, the expert noted.

Experts note that Orion is a multifunctional unmanned complex capable of performing a wide range of tasks, including strikes against ground targets.

The experience of foreign armies, especially the US and Israeli Armed Forces, demonstrates the effectiveness of the use of such drones in local conflicts, experts say.

In addition, medium-altitude UAVs are the basis for creating heavier modifications based on them, experts say.

Similar work is already underway by the Kronstadt group - based on the Orion, the Sirius UAV will be created with increased weight and dimensions.

Sergey Bogatikov, CEO of Kronstadt, told RT about this project at MAKS-2019.

It is assumed that the takeoff weight of the Sirius will be 5 tons,

The UAV will be able to cover 10 thousand km and stay in the air for up to 40 hours at maximum load.

As military expert Yuri Knutov said in an interview with RT, the closest foreign analogue of Orion is the Turkish Bayraktar TB2.

“However, the Russian drone has slightly more weight and wing size, which allows for an increase in payload.

The Orion UAV has a fairly serious assortment of weapons, including 20 kg and 50 kg corrected aerial bombs, guided missiles, and guided aerial bombs.

This drone can be in the air for a day.

When using two drones in shifts, this allows you to control the terrain until the desired target appears, ”the expert noted.

Yuri Knutov also noted that, in addition to weapons of destruction, Orion can carry various radar stations, including infrared television equipment, and, accordingly, work in the role of a reconnaissance aircraft or a reconnaissance relay.

“This is a serious breakthrough in the creation of attack drones, and a demonstration that Russia in this area has reached the level of Israel and the United States, which are considered the best in creating UAVs.

Undoubtedly, Russian attack drones will be in demand not only in the Russian army, but also abroad, ”the expert noted.

Alexey Leonkov agrees with this assessment.

“Undoubtedly, the use of such drones will grow in the future, and they will enhance the combat and operational capabilities of the Russian Armed Forces.

Such UAVs play an important role, especially when there are no air defense systems from the enemy's side capable of fighting this kind of drones, ”the expert concluded.