My children living abroad have been left out of these completely ordinary things in Finland - Mira, who lives in Southeast Asia, says

My school-age children have never played in the woods or woke up on a cold everyday morning, writes Mira Jalomies, who lives in Malaysia with her family. 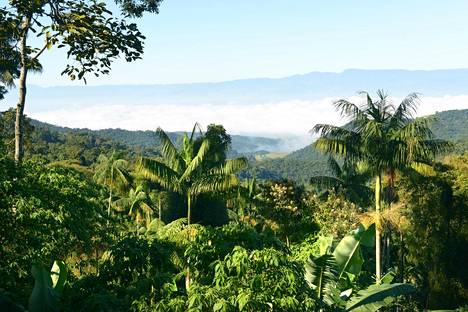 When I think about the childhood of my 13- and 8-year-olds to date, I feel wonder, joy, and shock: it’s so completely different from what I once had.

I lived all my childhood and youth in one and the same Finnish small town, but my children have already lived on three continents and in the country;

In Spain, Brazil and Malaysia.

In general, their childhoods have been similar to what they would have been in Finland - with their schools, friends and hobbies - but they have completely missed out on certain very ordinary Finnish things except:

1. Playing in the woods

“It just smells like woods,” my mom told me when I came home when I was little.

I always play in the nearby woods of the home, whose smelly smells stuck to clothes, hair and skin.

My own children have smelled many times on the sandy beach and the sea, but very rarely on the forest.

Yes, they have rumbled in the rainforests, but have never lived near a forest where you could go play, climb trees and build a hut - or even eat blueberries in late summer.

Because we have lived for seven years in constant summer weather, and the outdoors always look the same, it is difficult for a younger child in particular to figure out what season is going on and what the seasons actually mean.

Summer means a long holiday from school and winter is Christmas.

Spring and autumn are mere words that really mean nothing.

Decent winter weather with snow can be a rare treat in Southern Finland even today, but for my children they are something really exotic and wonderful.

Visits of a week or two in winter Finland are not successful every year.

Ice skating has also been possible abroad, but other winter sports have remained quite foreign.

Everything related to winter is weird.

Neither has ever awakened in their lives to a cold and dark everyday morning.

4. About garments and layering

Neither of my children knows what a garment means.

Neither even has rainwear, nor rubber boots.

They are not needed in the tropics because if it rains, we are inside.

Or if the deaf surprises and the clothes get wet, it doesn’t hurt because it’s so warm.

When my firstborn was small, I was in the mood for a winter trip to Finland - that the child would finally be able to play in the snow.

The quilted clothes and sleds had to be hauled from scratch for the trip, but by far the most laborious project was to get a strong-willed child crammed into those tamins;

he hated every moment from the bottom of his heart.

He then stood in the yard as a stump for a moment until he stated he wanted to inside.

5. As a first grader, being alone at home

Our classmates have never been home alone for more than a few minutes.

Here in Malaysia, and in many other countries, leaving that age alone at home would mean abandonment.

Personally, at the same age, I was often alone after school, because I wanted to, and because in Finland it is quite appropriate and common - although I have to admit that the habit has now started to feel wild.

6. Going on your own

In Finland, even relatively small children roam in the yard or in the immediate area on their own, and many first-graders can go to school alone.

In the countries where we have lived, even big children, for one reason or another, are not allowed, or can, move independently on just about anything.

You go to school by school bus or with a parent at least throughout the primary school, and everywhere else you go on guard.

After many years in an apartment building, we now live in a gated detached house area where a high school student can move on their own and even the younger ones can go to a nearby playground and visit a friend on their own.

Finnish winter sports have remained guests in the tropics, but diving and snorkeling have been practiced diligently. Photo: Peppe Mancuso

Of course, children do not think about the lack of freedom or the other things I mentioned above themselves, let alone annoy them, and they would not even be able to recognize them.

Personally, I am well aware that there is both good and bad in every matter - except perhaps playing in the woods, from which, moreover, staying is (I think) an obvious shortcoming.

Mira, who lives in Spain, Brazil and now Malaysia and has visited almost a hundred countries, is a travel journalist and copywriter.

You can find more inspiration for your travels on Mira's Facebook page.