Elina Sarpola runs between the Canary Islands, Helsinki, Kouvola and Saariselkä. When Elina Sarpola, a native of Helsinki, was a little girl, she looked out of the window of her home at the cruise ships flying in the harbor and their passengers. Remarks were made from the window of the apartment in Katajanokka that still affect Sarpola's worldview. Many of the tourists who arrived in Helsinki from the cruise ships were old and in poor condition. Walking looked awkward. Sarpol 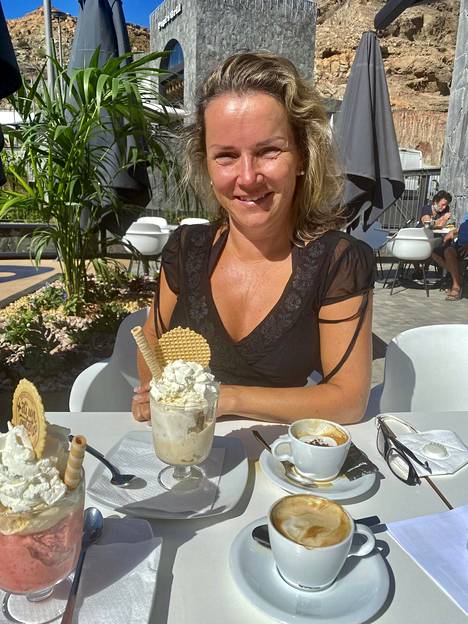 When Elina Sarpola, a native of Helsinki, was a little girl, she looked out of the window of her home at the cruise ships flying in the harbor and their passengers.

Remarks were made from the window of the apartment in Katajanokka that still affect Sarpola's worldview.

Many of the tourists who arrived in Helsinki from the cruise ships were old and in poor condition.

Sarpola found himself wondering if they would be able to enjoy their trip anymore?

Since then, Sarpola has tried to make the most of life himself.

Elina Sarpola has four homes with her husband.

The landscape changes according to the seasons. Photo: Elina Sarpola's home album

Now, decades later, Sarpola is living a life where you can live in the Canary Islands in November, fall and ski holidays in Saariselkä, and Christmas and summer in Kovola and Helsinki.

With her husband’s previous business and current investment activities, the family can lead a freer lifestyle.

Sarpola works in the IT field as much as the lifestyle allows.

In my own words, in “good middle age” we have to live to the fullest now that we can still.

- Life is unique and short, but the rest of the life is left, Sarpola formulates.

He's always been a little restless.

- Even as a child, I lived in California at three addresses because my parents were studying.

Maybe that’s where the longing for the tension associated with changing places is left.

The home changes according to the season

Living in four homes and two cottages may sound exhausting, but Sarpola asserts that it is by no means.

The no-fly ends are released at most when the place is changed too quickly so that not even the bag has time to be unloaded properly.

However, the couple themselves can influence where they are at any given time, so the change of place is mostly inspiring.

Landscape change also exposes you to the creative ideas you need at work and in life.

Besides, every home has all the important items.

These include, for example, running sneakers that Sarpola wears in any place.

In practice, therefore, moving from one home to another requires only sitting in a car, train or plane.

- Each home has its own characteristics.

We change places according to the weather and the season.

It is very enriching.

By December, Sarpola has returned to Finland.

The Helsinki home is intended for cultural excursions.

There is a view of Töölönlahti. Photo: Elina Sarpola's home album

Gran Canaria, silenced by Corona, was a peculiar sight: tourists and some of the long-term residents were gone, and believe texts were embroidered on the windows of beauty salons.

They were also tattooed on the workers ’arms.

- It was very ghostly and sad for the locals, but I have to admit that I enjoyed that peace myself, Sarpola says.

In December, Sarpola returned to Finland, home to Kouvola.

There she spent Christmas with her children and her husband.

Then it's time to move on to Lapland, which Sarpola calls a mindless snow paradise.

The purpose of Saariselkä's home is to ski and enjoy the darkest and coldest period of winter.

The dream is to see the northern lights.

- We will come to Helsinki for cultural orientations.

It is a townhouse in a national landscape, a short distance from all the cultural attractions and excursions in the city center.

Dreaming continues even when dreams have come true

Sarpola realizes that he is lucky compared to many others, but for him this is already an ordinary life.

He also writes about his findings from around the world in his blog Quadruple Home Interval.

However, a kind of dream of a moving life has always been for him, and now that the children have grown to a good stage, nothing is stopping him.

One of the homes is located in Saariselkä, which Sarpola describes as a snow paradise. Photo: Elina Sarpola's home album

He has not experienced envy either.

- Maybe it affects the fact that I am quite an introvert.

I spend most of my time with my family.

Living in numerous places has not been a mere hedonistic dream, as Sarpola describes how each place has taught something.

- There is a lesson to be learned, for example, how wonderfully hospitable the Spaniards are.

An invitation to a barbecue party can become almost unknown.

The idea is that the village can be invited to explore, not just after exploring.

I also want to continue my language studies to make the conversation with the locals more effortless.

Although Sarpola lives the dream life that many have dreamed of, he has not stopped dreaming himself.

- The dream is to spend another winter in Australia and perhaps a few years in Central Europe.

And so much to see in the Canary Islands.

My goal is to explore all the little alleys and roads of Gran Canaria.

It is a big enough place with something new to see all the time.

Do you live out of the ordinary?