The National Language Resources Monitoring and Research Center of the Central Commission for Discipline Inspection and State Supervision and Communication Center released the top ten anti-corruption hot words in 2020   2020 is an extraordinary year in the history of New China. At the end of the year, outline the anti-corruption hotspots of the year, observe the discipline inspection and supervisi 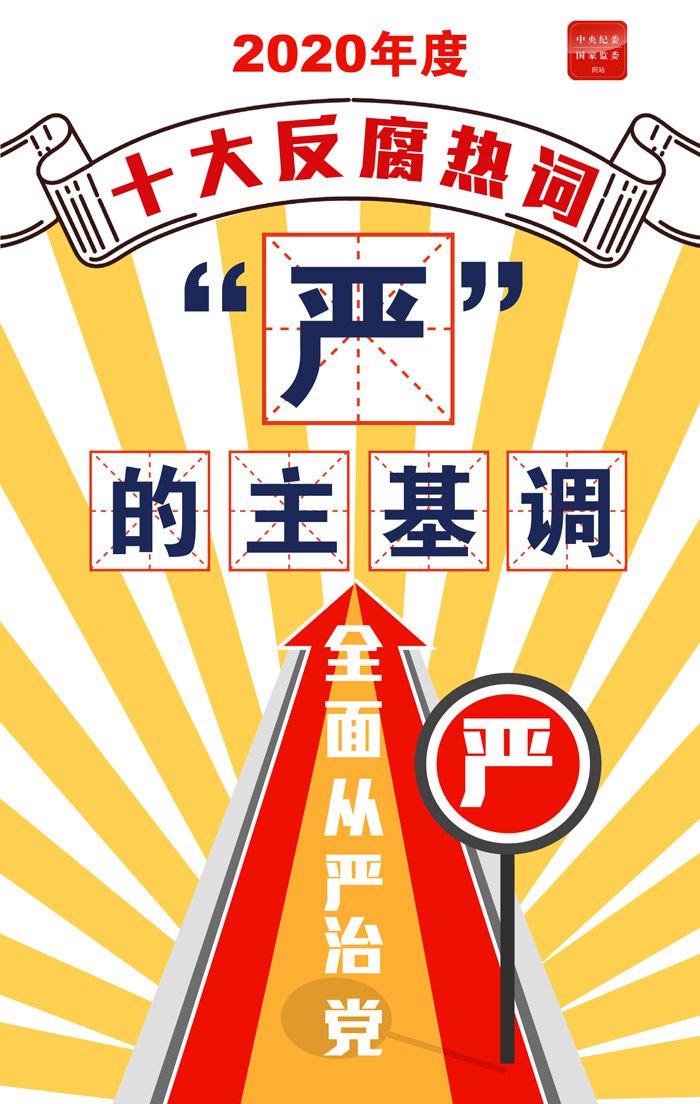 2020 is an extraordinary year in the history of New China.

The main tone of "strict"

In January this year, General Secretary Xi Jinping pointed out at the Fourth Plenary Session of the 19th Central Commission for Discipline Inspection that it is necessary to "consistently and unswervingly govern the party strictly in an all-round way" and "stick to the main theme of'strict' for a long time."

Over the past year, the discipline inspection and supervision agencies have deepened the use of the "four forms", performed precise and effective enforcement of disciplines, resolutely investigated and dealt with corruption cases involving political and economic issues, and reviewed Zhang Zhinan, Sun Lijun, Zhang He, Shi Wenqing, Wang Like, Tong Daochi, etc. Investigated and imposed party discipline and government sanctions on Zhao Zhengyong, Hu Huaibang, and Zhang Qi.

A comprehensive and strict governance of the party is always on the way. The determination of zero tolerance cannot be shaken in the slightest. The intensity of punishment of corruption cannot be weakened in the least. The main theme of "strictness" must be maintained for a long time.

Promote as a whole

Promoting the "three noes" as a whole reveals the basic law of tackling both the symptoms and the root causes. It is not only a basic policy in the fight against corruption, but also an important strategy for comprehensively and strictly governing the party in the new era.

Over the past year, the discipline inspection and supervision organs have focused on combining punishment and deterrence, system constraints, and awareness-raising, and implemented the "three noes" requirements in all aspects of anti-corruption and discipline, building an integrated system and mechanism to promote no corruption, no corruption, and no desire to corrupt , And constantly promote the high-quality development of discipline inspection and supervision.

On June 20, 2020, President Xi Jinping signed Presidential Order No. 46, promulgating the "Law of the People's Republic of China on Governmental Sanctions for Public Officials."

The Government Sanctions Law is an important law that regulates the administrative sanctions activities of supervisory agencies, improves the national supervision system, and strengthens the supervision of public power. It will be formally implemented on July 1.

On July 28, Zhang He, former member of the Standing Committee of the Provincial Party Committee and Vice Governor of Hebei Province, was expelled from the party for serious violations of discipline and law, and his retirement benefits were determined as a fourth-level investigator; his income from violation of discipline and law was collected.

Discipline inspection and supervision organs at all levels give full play to the advantages of co-office offices, perform governmental sanctions in accordance with the law, implement discipline enforcement and enforcement, and promote the organic integration of internal party supervision and national supervision.

Take bribes and check together

Taking bribes and offering bribes are two "poisonous melons" on a vine.

To maintain the high-pressure posture of the anti-corruption struggle, we must take bribes and conduct investigations together, so that the "siegers" will also pay their due price.

This year, disciplinary inspection and supervision agencies at all levels insisted on conducting investigations on bribery and bribery, investigated and recovered a group of suspected bribery criminals, and explored and established "blacklists of bribers" and other systems to resolutely cut off "hunting" and willingness to be "hunted". "The interest chain of "resolutely breaks the network of power and money transactions.

In 2020, "voluntary surrender" has become a frequent word in case notifications.

The Fourth Plenary Session of the 19th Central Commission for Discipline Inspection put forward "to levy lenient treatment in accordance with regulations, disciplines and laws", sending a strong signal to punish the very few and save the majority.

Under the strong deterrence and policy inspiration, a large number of cadres who violate discipline and law, including Wang Like, secretary of the Political and Legal Committee of the Standing Committee of the Jiangsu Provincial Party Committee, and Wen Guodong, deputy governor of Qinghai Province, voluntarily surrendered, and Liu Shiyu and Ai Wenli were given lighter punishments. , Which shows that the anti-corruption high pressure situation continues to deter, the effectiveness of corruption control is continuously improved, and the effect of promoting corruption, not wanting to be corrupted, and not wanting to be corrupted continues to appear.

Only by attacking snakes and seven inches, thoroughly investigating the corruption behind evil crimes, and breaking all kinds of "protective umbrellas" and "relationship networks" can we eliminate the breeding ground for evil forces.

Since the launch of the three-year special campaign against gangsters and evil in January 2018, the "Umbrella Breaking the Net" has made heavy blows, clearing the Sun Xiaoguo case, the Hulan "four major families" involving gangs, and Hunan Xinhuang" The "protection umbrella" of many public officials behind the case of "burial in the playground" has achieved good legal and social effects.

This year is the final year of the special struggle against criminals and evils. Disciplinary inspection and supervision agencies at all levels have steadily promoted the "six cleansing" actions, starting screening around clues to problems, and coordinating forces to promote the case.

From January to November, 29,600 cases involving gangs, crimes, corruption and "protection umbrella" were investigated and dealt with nationwide, 25,400 party disciplinary and government sanctions were given to party members, cadres and public officials, and 2,383 people were transferred to judicial organs.

Promoting reform by case means that after the case is investigated, through in-depth analysis of the cause of the case, research on the law of case occurrence, identify and plug the loopholes in the system, establish a long-term mechanism, and do a good job in reviewing and investigating the "second half of the article" to promote the case. Reform, promote construction with cases, and promote governance with cases to achieve a good effect of investigating and prosecuting one case, giving warnings, and governance.

This year, the Commission for Discipline Inspection and Supervision of various localities has continued to explore in practice, and strive to open up supervision and inspection, review and investigation, warning education, rectification and implementation, etc., through the formulation and issuance of disciplinary inspection and supervision recommendations, and urge the unit that initiated the case to hold party branch meetings, special democratic life meetings, Warning education conferences and other methods combine case handling with plugging loopholes in the system and strengthening supervision and supervision, and continue to deepen cases to promote reforms.

In the first half of 2020, the Inner Mongolia Autonomous Region launched a special rectification work on violations of regulations and laws in the coal resources field, and "checked back 20 years" of corruption in the coal field, setting off an anti-corruption storm.

Since then, many coal "tigers" in Inner Mongolia have been sacked, and the Commission for Discipline Inspection of the Autonomous Region has notified the "four bursts" and "six bursts" several times. The anti-corruption efforts have aroused national attention.

In addition, in response to the issue of "commissioning, parole, and temporary execution outside of prison for violations of laws and regulations," especially the issue of "paper-based sentences", which is of high concern to society, two pilot prisons in Hulan and Songbin in Heilongjiang Province and five provinces in Yibin City, Sichuan Province The prison has been investigating “reduction, falsehood, and temporary” cases for 20 years, seizing multiple reductions of sentences, “stepping on points for reduction of sentences,” compiling false identifications, etc., investigated more than 80,000 cases, and confirmed and corrected 307 violations.

"Shadow company" mainly refers to the fact that party members and cadres use their power or influence in a concealed manner to run businesses in their own business, or their spouses, children and other relatives and other specific related parties. Market entities that seek personal gain or carry out long-term benefit transmission.

Leading cadres hide behind the scenes, or set up intermediate links, or realize power realization in the form of doing business, running enterprises, undertaking projects, and wholesale projects.

Some party members and leading cadres lack party spirit and alienate their views on power. They want to become officials and make money. They use power as a tool for profit, which is the root of the existence of "shadow companies."

"Shadow companies" are actually collusion between government and business. They often interfere with the normal economic order through unfair competition, and are very easy to form corrupt gangs, destroy the political ecology, and have a very bad impact. They must be investigated and dealt with strictly in accordance with laws and regulations.

The family style of party members and cadres is not a personal matter or family affair, but an important part of style construction, which is related to the style of the party and government, and affects the social atmosphere.

The debts owed to family style tutoring must be paid at a higher price.