Europe launches a vaccination campaign against "Corona" ... and optimism about the new year

Yesterday, Europe launched a massive vaccination campaign to prevent the emerging corona virus (Covid-19), which it began with the elderly and medical teams, with the hope of ending a pandemic that crippled its economy and killed more than 1.7 million people around the world. European Commission President Ursula von der Leyen said, 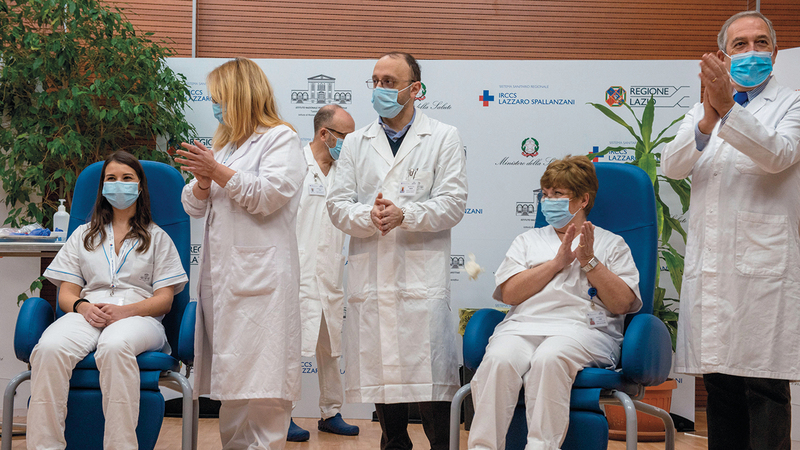 European Commission President: Vaccination is the permanent way out of the pandemic

Europe launches a vaccination campaign against "Corona" ... and optimism about the new year

Yesterday, Europe launched a massive vaccination campaign to prevent the emerging corona virus (Covid-19), which it began with the elderly and medical teams, with the hope of ending a pandemic that crippled its economy and killed more than 1.7 million people around the world.

"We are starting to turn the page on a difficult year ... vaccination is the permanent way out of the pandemic," said Ursula von der Leyen, who is coordinating the campaign, in a tweet on the social networking site "Twitter", while the European Commissioner for Health, Stella Kyriakides, expressed About her optimism about the new year

"We can start 2021 with optimism, as there is light at the end of the tunnel," Krijkidis said, noting that safe and effective vaccinations can allow a gradual return to normal life.

The European official considered that the guarantees granted to the anti-Coronavirus measures should not be reduced until a sufficient number of people are vaccinated.

The European Union approved the vaccine produced by the German company "Biontech" and the giant American company Pfizer, whose clinical trials have proven its effectiveness by 95% in preventing "Covid-19" disease. The continent of 450 million people has concluded contracts with a number of suppliers. To obtain more than two billion doses of vaccines, and it aims to vaccinate all of its adult population during the next year, and although Europe has some of the best health care systems and medical supplies in the world, the massive effort has prompted countries to seek the help of retired medical personnel, while other countries have eased the rules that Determines who is allowed to give injections.

The first dose of the "Pfizer-Biontech" vaccine was injected in Italy, at 7:00 GMT, and was received by nurse Claudia Ivernini, who told the media: “It is a small gesture, but it is essential for all of us.

I say it from the bottom of my heart, so let's get the vaccine for us, our loved ones and the community. ”

The Italian Prime Minister, Giuseppe Conte, wrote on his Twitter account, saying: "Italy is waking up, welcome to a history that will forever remain imprinted in our memories."

An hour later, Spain followed in Italy's footsteps, and Araceli Rosario Hidalgo Sanchez, 96, who lives in a nursing home in Guadalajara in the center of the country, was the first to receive the first dose.

Smiling, this woman said that she did not feel anything when the vaccine was given, then health worker Monica Tapias sat on the same chair after it had been disinfected, and received the vaccine.

"What we want is for most people to be vaccinated," the nurse said.

A few thousand kilometers away in Bucharest, nurse Michaela Angel, who works at the Matte Pulse Hospital for infectious diseases, who was the first to treat a patient with "Covid-19" last February, was the first to receive the vaccine.

The nurse felt it was "the least painful vaccine she's ever received."

In France, 19,500 thousand doses were sent to the central pharmacy of Paris hospitals, where employees who put special masks and gloves against the cold (the vaccine is stored at -70 degrees Celsius), transferred the boxes to special refrigerators.

The first to receive the vaccine in France were residents, volunteers, in two facilities for the elderly, one located in Seine-Saint-Denis, a region severely affected by the epidemic (nearly 1500 deaths), and the second in Bourgogne-Franche-Comte, one of the regions with the highest records. The rate of HIV infections.

In addition, several countries reported that they had discovered infections with the new strain of the mutated Corona virus on their soil, including Canada, Italy, Sweden, Spain and Japan, after announcing this week that there were cases in France, Germany, Lebanon and Denmark.

And according to a study conducted by the London School of Hygiene and Tropical Medicine, this new strain is "50 to 74%" more contagious than its predecessors.

After the discovery of this strain of "Covid-19", dozens of countries suspended their air, sea and land flights with the United Kingdom, causing chaos in the suburbs of Dover (southeast), where thousands of trucks stopped for days.

For its part, Japan decided to stop receiving new arrivals from non-resident foreigners on its territory from today until the end of next January, while the French Minister of Health, Olivier Ferrand, warned that France does not rule out imposing a third closure if the epidemic situation worsens.

The vaccination campaign in Europe has become more urgent due to fears of a new mutation of the virus related to a rapid increase in the number of "Corona" infections in Britain.

During recent days, Sweden and France have also monitored cases of the mutated virus, and so far, scientists say that there is no evidence to suggest that vaccines will not be less effective against the mutated virus.

Outside the European Union, Britain, Switzerland and Serbia have already started vaccinations for their own citizens in recent weeks.

The total number of new cases of the new Coronavirus (Covid-19), since the outbreak of the epidemic until yesterday, has exceeded more than 80 million confirmed cases in various parts of the world, according to an AFP tally based on official figures.

On average, 580,000 daily injuries were recorded during the past week.

And Europe is the region of the world most affected by the virus, crossing the threshold of 25 million infections and 546,000 deaths.

Nurses and elderly people receive the first doses of the vaccine, and some of them emphasized that it was "painless."