A new royal generation is being raised in European courtyards in silence - this is how the lives of young blue-blooded people are protected.

In the courts of Europe, young royals balance between responsibilities and ordinary everyday life. IS shows how protected the lives of young blue-blooded people are. 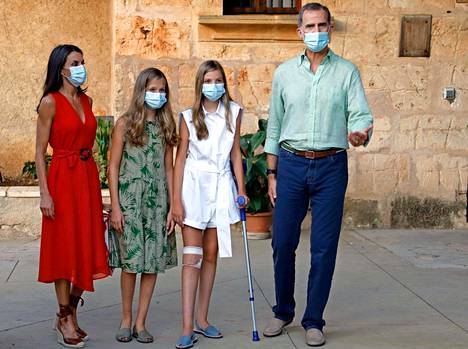 Princesses are usually seen in public only in official photographs as well as at Spanish National Day celebrations in October.

Over the past couple of years, however, young princesses have gradually been given more and more representational roles and responsibilities.

Leonor will in time follow his father, King Felipe, to the throne, and last year the Princess took an important step when she gave her first public speech.

Leonor stepped in front of the audience last October at the Princess of Asturias Awards Gala.

- I've been waiting for this important day.

This is an unforgettable moment for me and as my own father said in the same place my age, I will always keep this moment deep in my heart, Leonor said in his first speech.

In addition to his native Spanish, Leonor speaks fluent English, and according to the Spanish media, despite his young age, he also studies Mandarin Chinese, French and Arabic.

Leonor is supposed to follow in his father’s footsteps and later leave to study abroad.

Leonor is known to be very close with his little sister Sofia.

Spanish princesses are also style icons in their home countries and sisters often vary their clothes with each other.

However, the order of inheritance may still change, because if the royal couple had a son, the son would become the heir to the crown under Spanish law.

Princess Caroline’s youngest daughter, Princess Alexandra, has been mainly because of her figure skating background.

In recent years, however, the 21-year-old princess has switched skates to high heels.

Alexandra is particularly interested in fashion and has been seen at the forefront of the Dior and Chanel fashion shows at Paris Fashion Week, for example.

Alexandra’s own outfits have also aroused interest in fashion magazines, and Tatler magazine, for example, has smoldered profusely in the princess’s sense of style.

In 2018, Point de Vue reported that Alexandra had converted to Catholicism.

The princess has been dating German footballer Ben-Sylvester Strautmann for years.

At the red carpet occasion, Alexandra has always been seen with her mother, Caroline.

The distance to his father, the Prince of Hanover Ernst August, is said to be distant.

Another young blue-blooded monaco that has attracted much public attention is Princess Stéphanie’s daughter, Camille Gottlieb, 22. Camille has been allowed to live a freer life than many other young royals.

He has no title and, unlike his sister Louis and Pauline, he is not involved in the order of succession.

Camille’s birth in 1998 was a minor scandal in Monaco, as Stéphanie did not reveal who the child’s father is.

It was widely rumored that the child's father was the palace bodyguard Jean-Raymond Gottlieb.

Camille herself confirmed her father’s identity a few years ago by posting happy pictures of herself with Gottlieb on social media.

- I couldn't live without my parents.

They haven’t been together for very long, but they’ve always said I was a desired kid and they’re lucky to have me.

I wouldn’t trade my family for anything, Camille has told me in public.

As a child, Camille lived in a circus for a while when Stéphanie fell in love with Franco Knie, an animal tamer, and moved with her children to the circus company.

However, the relationship quickly fell apart.

Camille lives in Monte Carlo and is very active on Instagram.

Camille shares pictures of his everyday life with more than 69,000 followers, which is quite lavish on the basis of the Finn, with its pleasure yachts and luxurious holiday trips.

However, according to the young woman, Instagram photos do not correspond to reality, as she goes to work and also does a lot of volunteer work in various charities.

I do public relations, I produce events and I do marketing.

I am a managerial position, Camille has been responsible for Instagram mischievous messages, where he has been maligned "lazy and pampered".

Prince Christian, 14, the eldest child of Crown Prince Frederik and Crown Princess Mary, has so far been allowed to live a normal teenage boy’s life and focus mainly on his school and sports activities.

Frederik and Mary's gentle manner of upbringing is also indicated by the fact that the future king of Denmark was the first of his family to go to an ordinary primary school.

However, the Danish media have noticed that Christian's representation has gradually increased.

The prince, who turns 15 in October, has walked closely with his father on various occasions, and in Denmark this has been seen as a sign that he is being prepared for future duties.

In the spring, Crown Prince Frederik and Prince Christian gave a TV interview in which they talked about the effects of the coronavirus epidemic.

Christian and his siblings, Princess Isabella, 13, Princess Josephine, and Prince Vincent were scheduled to spend a semester in Switzerland, but they returned home to Denmark in the middle of the semester.

In an interview, the prince laughed at his parents, describing home school as very boring to him, and he doesn’t expect to be able to see his friends.

I want to play sports, the prince annoyed.

Christian’s cousin, Prince Nikolai, 21, has been fooling royal fans with his sly appearance and the international media has incited Nikolai to be one of Europe’s most sought after bachelors.

Nikolai photographed at a fashion show in Shanghai in the fall of 2019.

The court's brilliance and representation duties are not of interest to long-haired Nikolai, but he has created a career as a model.

The prince was first seen fiddling on the catwalk in 2018 at London Fashion Week.

Since then, she has worked as an advertising face for the renowned fashion house Dior, among others.

Nikolai’s older Prince Joachim and Countess Alexandra of Frederiksborg have given their blessings to her son’s modeling career.

- He shouldn't be forced to do anything he doesn't want to do.

Nikolai is allowed to decide for himself his own future, Prince Joachim has emphasized in an interview with Billet Bladet.

Since Nikolai does not perform representation duties, Hovi does not support him financially either.

According to the Danish media, Hovi will pay for the prince's studies in the future, but so far the prince has not yet found the most suitable study for him.

Last fall, Nikolai began his studies at the Royal Danish Military Academy, but dropped out of school after two months.

However, according to local media, Nikolai is interested in studying business administration and does not feel that a model career is his vocation.

- For me, modeling is just a job that helps and teaches me to build the future, Nikolai formulated in an interview with Hello!

Norway will be ruled by a queen in the future, when Princess Ingrid Alexandra, 16, will in time succeed her grandfather Harald and her father Crown Prince Haakon to the throne.

Despite her young age, Ingrid has spoken in public about things that are important to her, such as nature conservation.

The princess got to the rip last year and, according to the Norwegian media at the time, gave all the guests an original gift that reflects her values ​​well.

- When you plant this piece of paper in the soil, it will grow into colorful summer flowers over time.

I hope that it will remind you that only we can take care of the planet Earth, Ingrid sent greetings to its guests.

The Norwegians were outraged a few years ago when Haakon and Mette Marit transferred Ingrid to an expensive English-speaking private school.

Last year, the princess moved back to regular school of her own choice.Photo: Albert Nieboer / DPA via ZUMA Press

Like other young royals in the Nordic countries, Ingrid has attended ordinary school and lived an ordinary childhood.

Indeed, the princess has said in interviews that as a child she did not understand her family to be royal.

- The most boring thing about being royal is being in photos, Ingrid said in an interview in 2012.

The Norwegians were outraged a few years ago when Haakon and Mette-Marit transferred Ingrid to an expensive private school where teaching was in English.

Norwegian politicians opposed the decision and said it was declining support for the monarchy.

Haakon justified the decision on the grounds that language skills would be useful to Ingrid in the future.

Last year, however, the princess returned to public elementary school at her own request.

Ingrid’s cousins ​​Maud, 17, Leah, 15, and Emma, ​​11, grew up in a bohemian family of artists under the care of their mother, Princess Märtha Louise, and her father, author Ari Behn.

Märtha Louise relinquished her title to her Royal Highness as a result of the marriage, and the couple's children did not receive the title either.

Märtha Louise has described her daughters as highly artistic, social and empathetic.

Maud in particular is interested in art and is talented at drawing.

At the author’s funeral in January 2010, the Norwegians watched with tears as the eldest daughter, Maud, gave a speech by her father’s coffin.

Märtha Louise has told the social media that the year has been extremely heavy for children.

- You are an old and wise soul.

Full of joy, creativity and laughter, the princess described her daughter on her 17th birthday in April.

There are as many as three teenage princesses Catharina-Amalia, 16, Princess Alexia, 15, and Princess Ariane, 13 in the Dutch court. King Willem-Alexander and Queen Maxima have expressed the hope that children will be allowed to grow out of the limelight.

That is why the daughters are seen in public mainly at important representations.

In addition to this, Hovi publishes fresh portraits of children every year.

The daughters of the family are said to speak Dutch at home and they also speak Spanish as their mother tongue.

Children are also said to attend regular school wherever any ordinary Dutch children.

Riding and singing Catharina-Amalia became heir to the crown at the age of 13 when her grandmother, Queen Beatrix, gave up the crown and father Willem-Alexander was crowned king.

The king has spoken openly about how difficult it was for him to internalize when he was younger that one day he would ascend to the throne.

That is why she wants Catharina-Amalia to gather as many experiences and memories as possible of so-called normal life.

- I tell my daughter you don't know your limits.

Go, make mistakes out of the public spotlight.

That's what I did.

I went to festivals and celebrated, Willem-Alexander has said.

The dress of Crown Princess Elisabeth, 18, is being followed so closely in her native Belgium that even the running jerseys used by the princess were sold out in the blink of an eye.

Fashion magazine Vogue has praised Elisabeth as a stylist equal to Duchess Catherine and glorified her as the most elegant princess in the world.

Elisabeth is described as a conscientious and sporty princess who takes her crown heir duties very seriously.

The Belgian Court of Appeal announced that Elisabeth would begin her studies this fall at the Royal Military Academy.

Education has been described as very challenging and in addition to physical fitness, students are required to have math skills, among other things.

- I still have a lot to learn and in the coming years I will focus on learning more about the world.

Our country can trust me, Elisabeth said in her speech on her 18th birthday.