The photos tell the story of an idyllic family idyll that was destroyed - Gigi, 13, who died in a crash helicopter, was Kobe Bryant's eyeball

Three daughters and wife Vanessa are left to miss Kobe Bryant and daughter Gianna, who died in a helicopter crash. 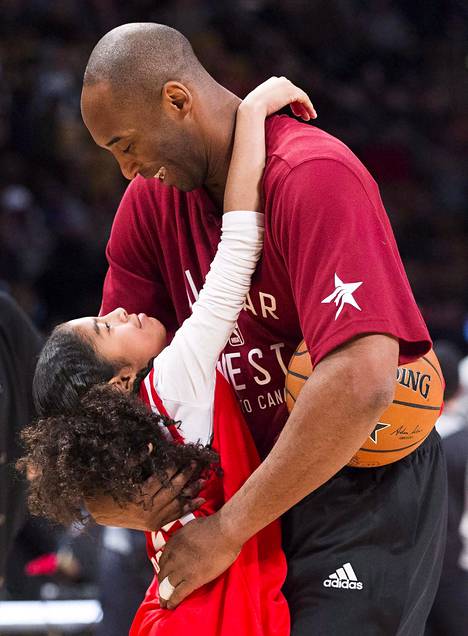 During Christmas and New Year, Ilta-Sanomat will republish stories that have interested and talked to readers during 2020.

The story below was originally posted on the IS website on January 27:

Kobe Bryant and eight other people died in a helicopter crash in California on Sunday night Finnish time.

Kobe Bryant met his future wife Vanessa Lainen in November 1999. The young decorative star was 21 and Vanessa 17 at the time.

They met when Kobe, who made his own debut album, happened to be in the same place at the same time.

A difficult relationship with my own parents

Bryant told the LA Times in 2003 that his parents thought Kobe got married too young.

Nor did they like the fact that Vanessa was not an African American but a Latino.

The parents were not present at the wedding.

The relationship began to recover in the mid-2000s after Natalia’s birth.

Parents were also present at the edge of the field during their son’s last two championships in 2009 and 2010.

A few years later, however, everything changed for the worse again.

Kobe got angry with his parents as they unknowingly tried to monetize him by selling his son’s childhood memorabilia at auction.

- Our relationship is shit.

They answer me, “That’s not enough”.

And then you sell my stuff?

The matter was dealt with in the courtroom.

Joe and Pam got through mediation the right to sell half a million dollars in front of memorabilia.

They later issued a bulletin apologizing for their actions.

- We apologize for the misunderstanding and resentment we may have caused.

We appreciate the financial support Kobe has given us over the years, the press release said.

However, the damage had already occurred.

Bryant did not forget the grudges on the hardwood floors and especially in private life.

He was not in the speeches with his parents for years after the events.

It is not known whether the relationship was rectified at all before Bryant's death.

After graduating in 2016, Kobe wrote a letter to the young self at the Players Tribune.

In it, he told “young Kobe” that this is not worth taking on his parents as stewards.

His advice was to invest in a family, not donate money.

Bryant’s parents were not present when the Los Angeles Lakers froze their player legend numbers in December 2017.

Instead, Kobe’s relationship with his two siblings, Sharia and Shaya, was better.

Believing in hard work, Kobe appreciated that neither wanted to be dependent on his money.

- They are both smart, university-educated women.

I'm really proud of them.

They get their own jobs, their own lives, and take care of themselves.

They have a better understanding of themselves and who they are, and they don’t resent me because they would be dependent on me, Bryant said in the same interview.

The oldest children are avid athletes

As a player, Bryant was known for his relentless work ethic and complete dedication to the game.

After the end of his career and until his death, Bryant devoted himself completely to his family.

He drove his children to school every day and coached their sports teams.

At its best, Bryant owned three homes in the area.

He sold one of them in 2015 for more than five million euros.

The Velvet Ropes website, which keeps track of public homes, says Bryantie's home is worth as much as € 20 million.

Located in a gated community, the villa, over a total of 1,400 square feet, has four floors.

The complex includes a large yard area with e.g.

There is very little accurate information inside the house, as the family has just published pictures of their home.

Bryant’s wife, Vanessa, also adheres very closely to her own privacy and does not appear significantly in public.

The sport runs deep in the Bryant family.

Bryant’s father was a former NBA player and also had a long coaching career.

She was named head coach of the Lakers-owned women’s WNBA League Los Angeles Sparks in 2005.

17-year-old Natalia was not bitten by a basketball fly.

Instead, the tall teenager found his passion for volleyball.

He played at High School in Sage Hill and also at Mamba Ballers, founded by his father.

Natalia turned just over a week ago 17. Dad posted an emotional update on Instagram.

I love you indefinitely.

You will always be my little princess, Bryant wrote.

The 13-year-old who died in a helicopter crash was the eye of his father, and basketball was their common hobby.

Bryant himself had time to tell him that after the end of his own career, he couldn’t bear to watch basketball at all for a while, but Gianna’s love of the sport made her come back to it too.

Bryant himself spoke about his daughter’s ambition on basketball parquet in an interview with Jimmy Kimmel in 2018.

- Sometimes a fan might come to say that Kobe, you need to have a son in your family who would continue your legacy on the hardwood floor.

To that Gianna replied that hey fai, no worries, I'll take care of that side.

No boy is needed for that, Bryant said in an interview with Jimmy Kimmel in 2018.

Gig’s dream was to get on the team at the successful university UConn and then the professional series WNBA.

The proud father released a video of Gianna’s excerpts from the game just a week before her death.

The Slam site shared a video on Twitter in which a father and daughter who died in Turma play together.

The marriage had failed in 2003

Bryantie's marriage was to end on two different occasions.

The most serious incident began in 2003. At that time, a decorative star was accused of rape.

A 19-year-old Colorado-based hotel employee filed a criminal complaint with police, in which he said the Lakers had forced him into sex.

Bryant admitted to having sex with the woman, but said it was consensual.

The case was heard in court, and throughout the 2003-04 season, Bryant shuttle between the NBA Games and the Colorado court.

Her marriage to Vanessa was on the run.

In September 2004, the criminal charges were finally dropped, and the same day Bryant issued a press release in which he apologized for what had happened to the woman and apologized for her actions.

- I want to make it clear that I do not question this woman's motives.

He was not paid money.

He has agreed that this statement cannot be used against me in civil court.

Although I really believe that what happened between us happened by consensus nin I now understand that he did not experience it in the same way.

After examining the evidence and hearing his testimony, I now understand that he did not agree with what happened between us, Bryant said in a statement.

In civil court, the matter was also settled.

According to expert estimates interviewed by the Los Angeles Times, Bryant paid the woman more than two and a half million dollars in the mediation.

Fought for his marriage

For the second time, Bryantie’s marriage was to end in early 2010 when Vanessa filed for divorce in court.

He cited “irreconcilable disagreements” as the reason.

According to TMZ, in practice, this meant that Vanessa again suspected her husband of infidelity.

The decorative star himself fought desperately for the salvation of his marriage.

The couple mediated their disputes for more than a year.

In 2016, Bryant said he wanted to win his wife’s heart back with a big gesture.

He decided to learn to play the piano.

- Lessons would have been too easy.

I learned by ear.

Bryant learned by holding headphones to his ears.

He would play it to his wife when the time was right.

- If you sit down and decide to learn something until you master it, then in the end there aren’t an awful lot of things you couldn’t embrace.

I wanted to learn that song.

It has so much beauty and pain.

Vanessa took Kobe back in 2013 after more than a year of separation.

The Bryantie family in 2009: Kobe, Vanessa, Natalia and Gianna.

Kobe received a congratulatory spell from Gianna in June 2009 after the Lakers secured the NBA championship with a victory over Orlando Magic. Photo: HANS DERYK / REUTERS

Kobe's parents Pam and Joe were present in the seventh match between the Lakers and the Celtics in the NBA Finals in 2010. The Lakers celebrated the championship at the end of the match. Photo: KEVIN SULLIVAN / ZUMA / MVPHOTOS