Photos: A special sight appeared in the family yard - “We all have a little more frantic sense of humor”

On the eve morning, a special newcomer appeared in the yard of the family spending Christmas at the cottage. 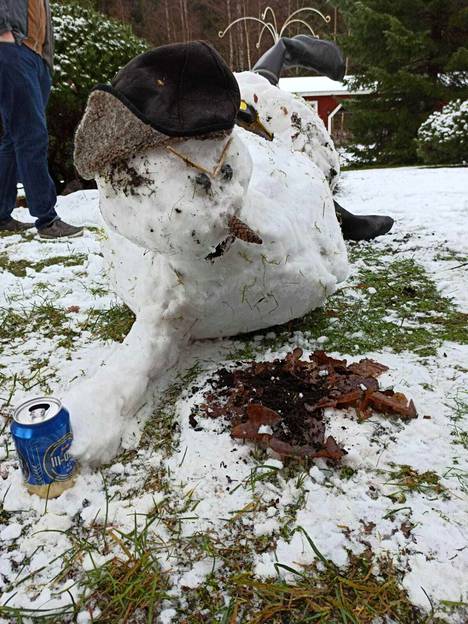 When the snow whitened the land in the Pirkanmaa Streams on the eve morning, brothers Noel and Henry, who were spending Christmas at their cottage, decided to erect a work of art that violates tradition in their courtyard.

A few hours later, on the lawn, a snowman staggered to his side.

Judging from the pictures, the gentleman, who is clogged in boots and a flap hat, has started his Christmas party with liquid fins.

"We all have a bit of a richer sense of humor in the group," Noel, who prepared the hubby, tells IS. Photo: Noel / Reader's photo

On the face, however, a bottle of wine and a can of beer have brought only a sour look.

- That became quite funny.

We all have a little more rude sense of humor.

If we start doing something like this, the result is always something abnormal, Noel, who reached IS on the eve of the evening, says.

According to Noel, a total of four brothers and their parents and the mother of the other parent were present in the creation process.

However, according to the man, the idea of ​​the lion's share was made by Henry, who was the father of the idea.

According to Noel, the length of the snowman is a little less than a couple of meters.

The hubby lost his balance after drinking a lot of alcohol on the eve of the eve.Photo: Noel / Reader's picture

Although a snowman vomiting on the ground and falling into his pants walks in the yard of the cottage in Virrat, Christmas has been spent indoors in a peaceful atmosphere, according to Noel.

- The idea seems to have come to fruition when it was right in the morning.

After all, you always go for the beer, of course, a 24-year-old man reports from Pirkanmaa.

The Finnish Meteorological Institute previously told IS that most of Finland has enjoyed the little frosts and snow on Christmas Eve.

Only in the large cities of the south and west has the weather so far been November: snowless, gray and mild, but still wet.