Such is Nooralotta Nezir's rehearsal before eve: "It's sure to go acid and close to vomiting"

Nooralotta Neziri takes two days off at Christmas, but the price is an eve pig-like hard workout. Fence runner Nooralotta Neziri, 28, spends Christmas in Pori, where she is from, as well as her life partner Ville-Matti Rantala. The two Christmas holidays offer a rare treat for a top athlete training with Olympic goals. - On Christmas Eve and Christmas Day, I keep it completely free, says Neziri, who has been playing at the level of values ​​since 2012, coached by Petteri Jouste. But the pric 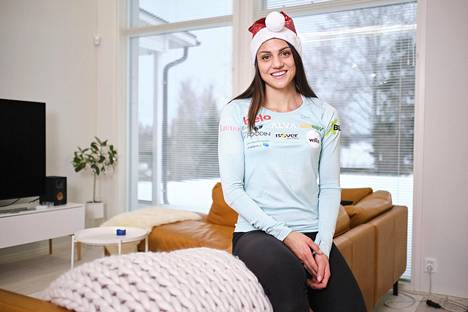 Fence runner Nooralotta Neziri, 28, spends Christmas in Pori, where she is from, as well as her life partner Ville-Matti Rantala.

The two Christmas holidays offer a rare treat for a top athlete training with Olympic goals.

- On Christmas Eve and Christmas Day, I keep it completely free, says Neziri, who has been playing at the level of values ​​since 2012, coached by Petteri Jouste.

But the price of the two-day tube he actually pays in advance, on the theme of Christmas Eve, fits the hard work of a pig.

- It's the last hard workout before Christmas.

It will definitely go pretty acidic and close to vomiting.

The exercise done in the morning in Hipposhalli, Jyväskylä, with its initial warm-up and final warm-up, lasts about two hours, Neziri said in advance.

The theme of the exercise is sport technique and submaximal speed, which means running bets just below race speeds.

92-95 percent of the maximum speed for distances of 60-300 meters has been written as power zones in the Nezir program.

Due to the high number of repetitions, the load raises lactic acid levels to unbearably high levels, which may cause nausea leading up to the vomiting reflex.

After the rehearsal, Neziri posted a picture on Instagram.

Even before Christmas, Neziri takes on a hard workout with a massage for which he doesn’t have to go further out to sea to fish.

Rantala is a trained sports masseuse.

Petteri Jouste, the coach of such an exercise program, wrote to Nooralotta Nezir for Christmas week.

After Christmas Eve and Day, Neziri returns to practice on Baptism Day, in the spirit of a running run described as “light” in the training program.

For a power athlete like him, eating a mile that eats leg sensitivity is not a typical workout.

As early as December 27, Nezir's program is more sport-specific: active mobility and high-speed exercises related to the characteristics of hurdles, such as ball throwing, speedless long jump, pole and fence jumps, and fence walking.

December, so my freer program is only a couple of weeks after the outdoor track race season is over in late summer or early fall.

In other words, we get a little calmer at Christmas.

Nooralotta Neziri spends Christmas in her hometown of Pori and rarely enjoys as many as two consecutive holidays.

Before them, training is hard. Photo: Hannu Rainamo

“On a free schedule,” Neziri means he trained twice more hard this Monday, but once more on Tuesday and Wednesday.

However, the content of the exercise on Tuesday was also hard: regular interval runs and upper and middle body strength training.

Although Neziri gets two rare holidays at Christmas, she still doesn’t sit at the dining table in a self-disciplined cloakroom.

The woman does like the Christmas boxes, but eats them only in small buckles.

The plate is filled with salad and Satakunta's traditional Christmas food, rosoli.

It is made from boiled beets, potatoes and carrots and served cold.

The reason for the abstinence is revealed as you scroll through Nezir's training program closer to the New Year:

Relegation from the final in the second-millennium comparison took a heavy toll at the 2018 European Championships in Berlin. Photo: Vesa Koivunen

Due to the ongoing corona pandemic, it is not yet known how much can be competed during the winter reign and where, but Nezir’s first main goal is to secure a place in the Olympic Games postponed during the year in Tokyo.

Their showtimes end on June 29th.

Annimari Korte and Reetta Hurske have secured their personal place in the 100-meter hurdles, having fallen below the straight qualifying time limit of 12.84 already in the summer of 2019.

Neziri ran 12.84 in the allowed wind conditions last summer, but was not accepted as an Olympic show because of the corona pandemic, athletes around the world had very unequal opportunities to give shows.

In his three previous championships, ie the Rio Olympics 2016, the Berlin European Championships 2018 and the Doha World Championships 2019, Neziri has been the best Finn in the final standings and each time in the semi-finals.

He dropped out of the Berlin European Championship final only in the thousandth place comparison and finished ninth in the overall results.