Candles were lit for the victim of the Koskela teenage death on the darkest day of the year - "What has happened that this is possible?"

Dozens of people went silent during Monday in Käpylä in the park, where the congregation asked to bring candles. 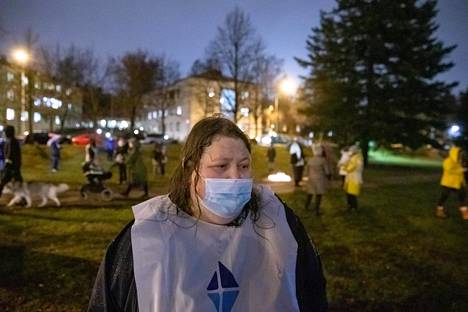 Monday is the winter solstice, the darkest day of the year.

The gloom is accentuated by the cold rain raining from the sky, which disappears into the snow-free black ground.

But in the midst of darkness, candles shine that are slowly lit as more and more people go to turn them into a cluster.

In Meurman Park in Käpylä, Helsinki, the violent death of a 16-year-old boy, which shocked the residents of the area at a time of candlelight, was commemorated on Monday.

A few hundred meters from the park behind Koskela Hospital, a 16-year-old boy was found dead, who was suspected of being beaten to death by three peers in a very brutal and cruel way in early December.

At the moment of the candle, the Oulunkylä parish wanted to point out that no one needs to be left alone in the face of grief, wonder, shock or questions.

The event was supposed to give a short speech and listen to music, but due to corona restrictions, it was decided together with the police to give up the program.

Instead, people were allowed to bring candles to the park, where parish workers were present from the afternoon to meet people.

- For some of them, this case may have been closer, but it has shocked and affected many.

The big question people have had is, what has happened to make this possible?

Pastor Ulla Kosonen was on a rainy evening to support the parishioners and the residents of the area. Photo: Joonas Salo

Kosonen hoped that after the turn of the year, it might be possible to look to the future.

- There are many levels here.

Of course, for those affected, life is now a different one.

Those who are a little more on the perimeter are slowly beginning to think about how everyday life will recover.

For some who arrived at the park, the death of a 16-year-old came close in person.

- An acquaintance of my grandchildren has been dating one of these young people suspected of the act, a man living in Oulunkylä told IS.

Because of his grandchildren, he did not want to perform under his name.

The knowledge of the young man’s discovery of the body and the arrest of three peers was shocking, especially when he himself has two grandchildren of the same age.

- It was only in the morning that I learned that the case did not directly concern them, even though it was quite close.

Got a little skin.

When I saw the picture, where it had happened so the sensor position very well, because I've lived here almost 40 years.

In that sense, too, this touches, and probably all the way to the Utsjoki River, Grandpa pondered in a rainy dark park.

She recounts how her granddaughter’s mother had had a long discussion with the young man.

- Two nights they had worn this.

He ponders why the serious acts of violence against young people have increased this year.

- Would there be anything to do with the corona?

At least home alarms have increased.

Helsinki police say they have continued to investigate the Koskela teenage murder.

Three 16-year-olds are suspected of killing their peers in a way that has included both humiliation and prolonged and intense violence.

The act is believed to have taken tens of minutes.

The trio is suspected of harassing the victim for longer.