Tiffany Dover, a nurse at a hospital in Tennessee, USA, has just received the Pfizer-Biontech covid-19 vaccine, and will be interviewed by television. In the middle of the interview, she starts to take care of her forehead and then collapses on the ground. The video is now being spread by vaccine opponents on social media as proof that the vaccine is actually a deadly poison. 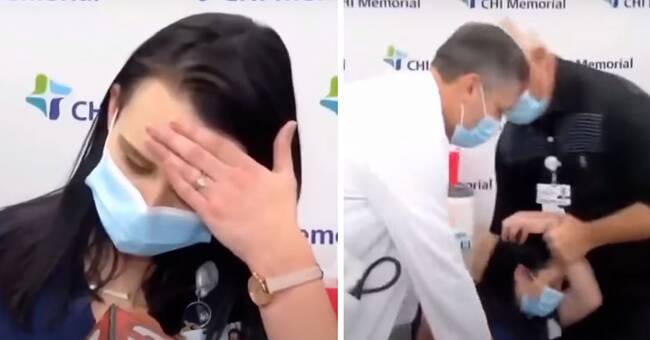 Shortly afterwards, she lies on the ground, fainting.

A few minutes before, she had been vaccinated with the Pfizer-Biontech covid-19 vaccine.

The dramatic event has been widely circulated on social media, both on English-language and Swedish pages.

Among vaccine opponents, the video has gained extra momentum, with claims that the collapse was due to the vaccine being toxic.

In some contexts, it has been alleged that Tiffany Dover died because of the "death vaccine".

But that is not correct.

The nurse was later interviewed by WTVC-TV Newschannel 9, a local channel in the area, and told that she felt much better.

"It happened all of a sudden, I could feel it.

I felt a little disoriented, but I'm fine now, and all the pain is gone, "she said, according to Reuters, adding that she had" fainted six times in the last six weeks. "

She also says that she has a medical condition that makes her often faint in temporary pain.

On Saturday, the hospital itself gave an update on Twitter, where they say that Tiffany Dover is at home and feeling well.

According to the US National Agency for Public Health, Centers for Disease Control and Prevention (CDC), fainting is relatively common in connection with vaccination, and that it can be due to pain, or anxiety associated with the needle stick.