Over the course of three years, Nivala’s Pelle Peloton has built an adventure site with dozens of attractions on the adjacent field. 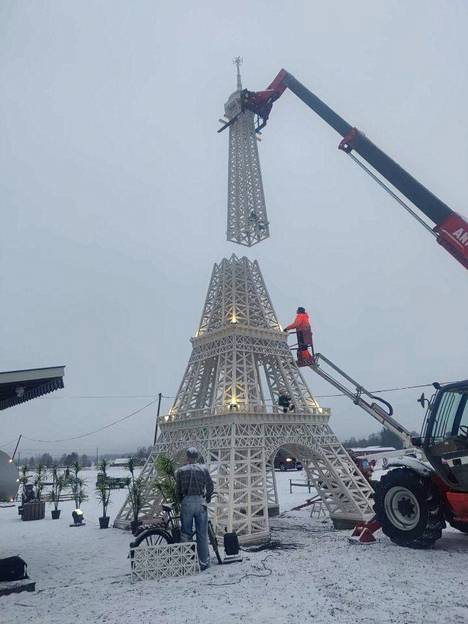 The Eiffel Tower was erected on Nivala's Maliskylä field over the weekend.

The white tower, which is less than 14 meters high, somehow complements the adventure park built by Pasi Keskisarja.

Next summer, the Eiffel Tower will serve as a gateway to Crazyland, which has grown in the field.

The tower is a replica of the most famous attraction in Paris.

According to the middle series, the scale is 1:25.

The base of the tower has a floor area of ​​5 times 5 meters.

The tower is built of wood.

It is made in parts of the Central Series Hall.

He has spent about three months on construction in addition to day work.

- I did the first three floors in a different place.

It's kind of assembled from blocks.

That way I got all the parts made inside the hall, Keskisarja says by phone about Nivala.

It took 3-4 hours to assemble the tower. Photo: Pasi Keskisarja

The Eiffel Tower was lifted into place on Saturday.

Machines were involved in the lifting work.

According to the Central Series, the contract was demanding, but not difficult.

However, it was pretty nice with the help of machines.

It took 3-4 hours to get the last parts in place.

In the evening, the rest of the lighting was put in order, it was a more demanding task, he describes.

The Eiffel Tower in Nivala's field has been painted white, as the audible paint made its lighting show.

Crazyland, created by the middle series, originated three years ago when a man acquired an airplane for his yard.

The large machine did not fit the view of the yard, so it was rented field from a neighbor.

In three years, in addition to the plane, an air traffic control tower, a 30-meter section of the train track, a sinking Titanic, a hoarse rocket, three old car rarities, a 40-story birdhouse, the world’s smallest sauna and two wooden cannons have appeared on the field.

When IS visited Maliskylä in November 2017, Keskisarja built a hoe rocket.

The 350-pound and over-ten-meter Saturn V rocket has since found its place in the field.

The middle series is inspired by the interest in all kinds of things in construction work.

He wants to try out what ideas can be implemented by building.

I want to do new stuff, I'm interested in and which can not see every day.

I want to implement someone’s story and at the same time get to think about how it needs to be implemented to succeed, he finds out his construction frenzy.

The field next to the backyard already has an impressive collection of different attractions.

The middle series is not sure how many there really are.

- I have not calculated how many elements there are in the field now.

There are also new plans in mind.

I do small but spectacular projects, he hints.

After a little pressure, the man, also called Maliskylä's village madness, reveals that the next construction site is the Great Wall of China.

- Next I thought to make a piece of the Great Wall of China.

At the same time, it would act as a visitor to the neighbor.

25 meters of wall according to the terrain, he inches.

Crazyland has the smallest sauna in the world.

Its stove is on the order of 20 cents times 20 cents. Photo: Vesa Ranta

Crazyland has been a popular tourist destination during the summer.

Last summer, according to the Central Series, thousands of spectators visited it during the holiday months.

- There were occasional queues.

Even now, the yard is full of cars.

Especially this new Eiffel Tower seems to be of interest to people, he says.

Maliskylä's Crazyland is located about 140 kilometers from Oulu.

The village can be reached from Nelostie Kärsämäki, from where it is about 30 kilometers.

When IS visited Crazyland three years ago, Pasi Keskisarja built a hoarse rocket in his hall. Photo: Vesa Ranta