Fiat's new old 500X SUV in test drive of IS - what exactly has changed now?

Test drive: The retro-body Fiat 500X got new engines familiar from Jeeps. Fiat's “retro SUV,” the 500X, introduced in 2014, is in its so-called facelift age. Competing with Nissan Juke, Opel Mokka and Peugeot 2008, among others, the four-door has not reached the top of the class in terms of sales figures, but are the lunches better now with a small model overhaul? The pushbuttons on the new steering wheel are large enough, and there is no pressure on the touch functi 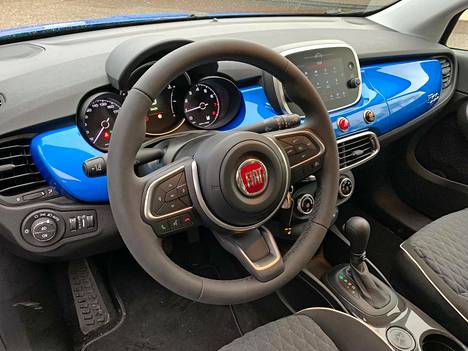 Competing with Nissan Juke, Opel Mokka and Peugeot 2008, among others, the four-door has not reached the top of the class in terms of sales figures, but are the lunches better now with a small model overhaul?

The pushbuttons on the new steering wheel are large enough, and there is no pressure on the touch functions. Photo: Tommi Lempinen

At least in terms of appearance, pinching the model has not been considered necessary at the factory, as the mid-term updates made have not really touched the plump round shapes at all.

Or well, small cosmetic changes can still be found in the front and rear lights, but nothing bigger has been changed.

The actual steak this time lies under the hood, where a new mini-family of two engine options called FireFly has appeared.

However, it is no longer a matter of light hybrid technology or any other major new, but already familiar from the Jeep side, the FCA Group's three-liter three-cylinder petrol turbo - and a 1.3-liter but otherwise technically quite similar quadrant with a displacement of one piston-cylinder pair.

The clearest external symbol of the new model is the body-colored area in the middle of the taillights. Photo: Tommi Lempinen

For the rest of the power line, the six-speed manual is always smaller than the machine option, while the bigger one is also a six-speed, quite comfortable but slightly sluggish automatic.

The same line of reform in the old spare better continues inside, where the eye-catcher can notice the slightly redesigned steering wheel and new graphics in the instrument cluster.

The boot is quite appropriate for the car's external dimensions, both in liters and shapes. Photo: Tommi Lempinen

For the user, the new engines represent a basic level of substance, ie driving is quite easy to take into account the price and size range of the car for the power line.

The kick is enough for basic chores and a front-wheel drive buddy (four-wheel drive on 500X models isn't available these days) just fine and the consumption is reasonable.

The worst confusion in Fiat’s infotainment systems has been left behind.

The revamped Fiat 500X can be described as average, even if the car does not offer as much fun Italian-inspired excitement as one might expect from the brand.

Most of the life seems to be found in the steering, although this off-road Fiat SUV is not particularly agile, for example, when slouching in cramped parking garages.

In a way, however, what is surprising is the quality impression given by the Fiat 500X on the road, which in some cases even feels quite solid and really good.

Even inside, the level of finishing is reasonably good, and most are disturbed mainly by a few rather cheap plastic grades that break the whole.

In short, it can be said that the Fiat 500X, which has begun the final approach of its model arc, is, as such, a very good game, the biggest advantage of which is the secretly increased purchase price.

The back stool is a bit wooden, but offers practical space for children, for example. Photo: Tommi Lempinen

The price level of between EUR 20 390 and EUR 25 590 in relation to the characteristics of the car is no longer really bad and responds well to the challenge posed by competitors.

Especially when, in fact, all the possible equipment available is now practically standard.

- Relevance of new power lines in basic use