Brigitte Thomas, the one who resuscitates abandoned board games - France 24

Brigitte Thomas, the one who resuscitates abandoned board games Erstein (France) (AFP) But where to put the Christmas tree? In Brigitte Thomas' house, board games have invaded everything, from floor to ceiling, games that this self-employed person meticulously renovates before reselling them. "There, I make Monopoly because I no longer have any on the site", explains this 57-year-old former head of a socio-cultural center, in the middle of the piles of game 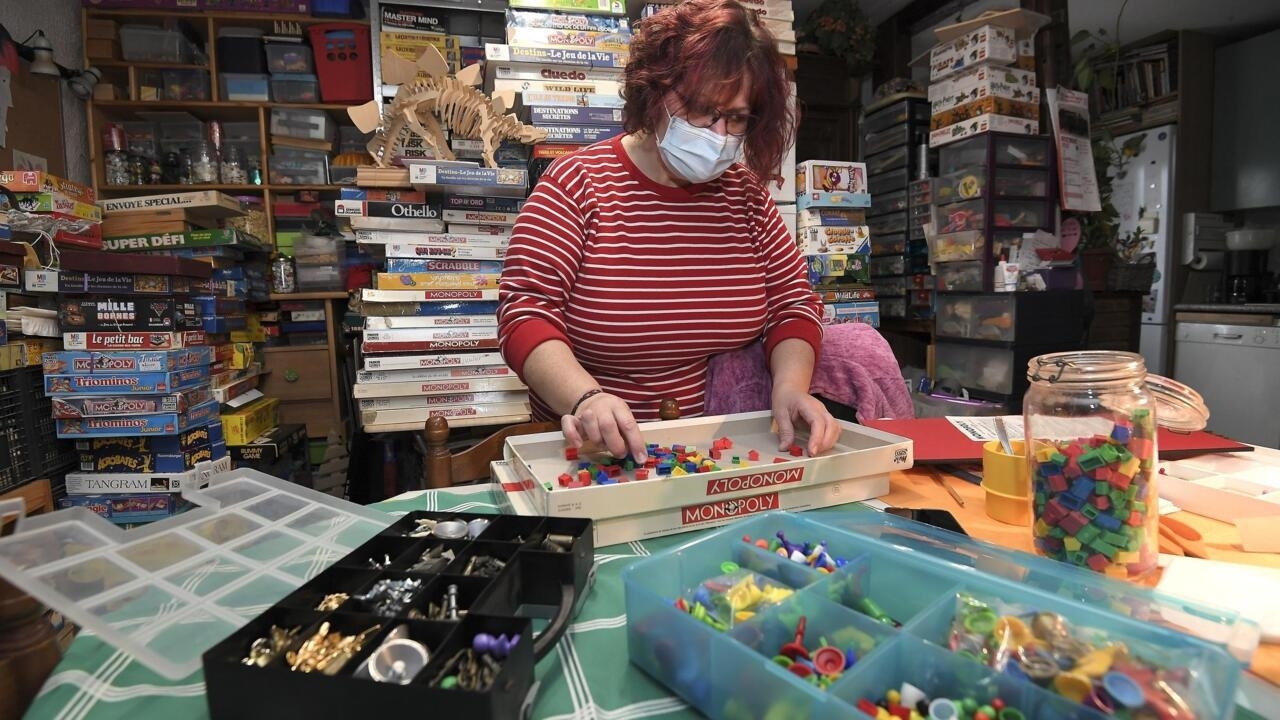 But where to put the Christmas tree?

In Brigitte Thomas' house, board games have invaded everything, from floor to ceiling, games that this self-employed person meticulously renovates before reselling them.

"There, I make Monopoly because I no longer have any on the site", explains this 57-year-old former head of a socio-cultural center, in the middle of the piles of game boxes that populate the living room of her house. typical Alsatian, about twenty kilometers south of Strasbourg.

For almost four years now, she has been selling on her site www.ludessimo.fr at reduced prices re-typed board games, which have been given to her or bought at Emmaüs, sometimes incomplete, often damaged.

On her table, Brigitte Thomas counts all the elements of Monopoly, checks the counterfeit banknotes in francs.

Beside, the pawns are dipped in a small basin.

If it is missing, it will look for it in its reserve of pawns of multiple shapes, colors and eras.

In a tray, markers with infinite color variations.

"52 is Scrabble green, 43 is for the old Beijing Mystery boxes, for Ravensburger blue, I mix two", she explains, devoting one to two hours to clean. , repair, complete and repackage a game.

Only the bedrooms, the bathroom and the toilets are spared the invasion of games awaiting a second life.

Everywhere else, the batteries of Docteur Maboul, so difficult to renovate "because either there is no more light, or there is no more sound", alongside those of various editions of Trivial Pursuit, Risk or "Who is it ?".

The first floor is also a maze of board games, these are classified, numbered and ready to be sold.

When Brigitte Thomas' husband has found the time, in the evening after his day's work as a logistician, to register them on the online sales website.

Between her house, her son's garage and another rented storage place, this original Trojan estimates that 16,000 games she has in reserve.

Three thousand are already renovated and ready to be sold, but, with the Christmas rush and interest in board games increased tenfold by the lockdowns, only 1,300 are on the site at this time.

"There, I sold 1,000 games in 15 days", rejoices the one, who is a little overwhelmed, finds herself preparing at night the packages to be sent throughout France, mainland and overseas, Belgium and even sometimes the Canada.

After the third Christmas of her online store and endless hours of work, Brigitte Thomas hopes to reach a salary of 1,200 euros.

During his many years in the social sector, the board game was already a working tool.

"The game has always been for me an intergenerational, intercultural and social support as much as the book", she considers.

She also sees "keys to education".

When, for family reasons, Brigitte Thomas quits her job to return to Alsace, where her husband comes from, she cannot find a job in her sector.

Approaching then fifty, "I had passed the DLC" (expiration date), she says "a little angry".

At the end of her unemployment rights, she sells her own board games to make some money.

Potential buyers then begin to contact her to ask if she would not have "this or that".

When this is not the case, the one who has always "liked to repair, create" begins to look for these games in flea markets or other places of recovery and ends up making it her activity.

"I am happy again to serve something," she rejoices.

In August, a tour of France driving his van in the colors of Ludessimo allowed him to recover 1.2 tonnes of board games that people wanted to part with without throwing them away.

"I think I must have five or six years of work ahead of me."