Juve is there: 4-0 to Parma and Inter hooked to second place 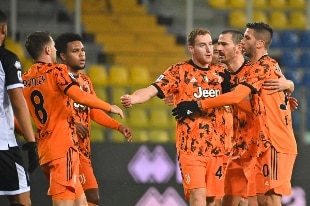 19 December 2020 Inter hooked in second place, Milan in the sights a point higher.

Juventus passes widely to Parma and sends a very clear signal to the championship: the bianconeri (with the bright orange third kit) are there.

Rossoneri (away from Sassuolo) at 28 points, Juve and Inter (at home with Spezia) at 27. At the 'Tardini' the third advance of the thirteenth day of the championship ends 4-0 for Pirlo's team.

After the home draw with Atalanta, an injection of confidence for Juve.

The ducals, who came from three draws and a victory, are unable to stop another great one, after the draws imposed on Inter and Milan.

The points in the standings are 12, 5 more than Genoa third from bottom.

Juve dribbles well, but the first real chance is in the quarter of an hour of the hosts with Kucka calling Buffon to oppose with the body.

At 19 'Sepe stretches out on a low shot from Bentancur.

At 23 'the goal of the former: Alex Sandro hits the mark, Morata finishes and Kulusevski left-handed gives the Bianconeri the lead.

Parma feel the blow and in the 26th minute the Juventus doubling arrives: Morata still assistman, on his cross Cristiano Ronaldo stands out and bags with his head.

At 30 'the Portuguese kicks from the edge, over the crossbar.

The reaction of the ducals was weak: a left-handed from outside Iacoponi is easy prey for Buffon.

At the end of the first half Bonucci touches the net with a deviation after a header from McKennie.

Liverani tries to shake his team back from the locker room with Karamoh for Gervinho, but it is useless because at 48 'CR7 packs his brace with a diagonal, goal number 12 of the Portuguese, at the top of the top scorer.

At 50 'Buffon foils an attempt by Kucka.

Triple change for Parma at the turn of the 60 ': Busi for Iacoponi, Cyprien for Kucka and Inglese for Cornelius.

Pirlo's first change in the 68th minute with Bernardeschi for Ramsey.

at 74 'chance for Parma, but Gagliolo sends a high cross from Hernani.

At 76 'between the bianconeri it is the turn of Cuadrado for Bonucci and Portanova for McKennie.

At 82 'Pirlo inserts Chiesa for Ronaldo.

At 85 'last substitution for Liverani: Brugman for Kurtić and black and white poker with a header from Morata propitiated by a cross from Bernardeschi.