Press episodes have been published about a new part of the memoirs of the former Secretary-General of the Arab League, Amr Musa, with a debate between him and former Iraqi Foreign Minister Naji Sabri al-Hadithi, where the latter questioned facts included in the episodes, most notably what Musa narrated about his emotion in the face of the Iraqi president. 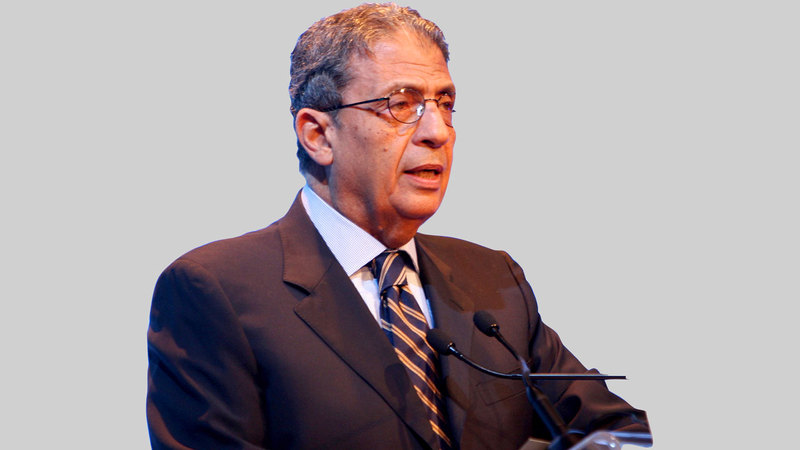 He denied the novel "Emotion in the Face of Saddam" .. The former Secretary of the "Arab League" cites a recording

Press episodes have been published about a new part of the memoirs of the former Secretary-General of the Arab League, Amr Musa, with a debate between him and former Iraqi Foreign Minister Naji Sabri al-Hadithi, where the latter questioned facts included in the episodes, most notably what Musa narrated about his emotion in the face of the late Iraqi President Saddam Hussein, and the latter’s authorization of Musa to speak on behalf of Iraq, in a press statement issued by Sabri, published by Al-Shorouk and Al-Sharq Al-Awsat newspapers.

Moussa responded to Sabri's questioning of the published accounts, but Moussa’s response, and the subsequent testimony of the memo’s editor, Khaled Abu Bakr, to reinforce the response, did not close the door to the press debates in the Egyptian, Iraqi and Arab press regarding the notes, which observers expect to raise after their full publication about « Dar Al Shorouk »More controversy.

In detail, the introductory episodes that are published in the newspapers Al-Shorouk, Al-Sharq Al-Awsat and Al-Mada currently carry a second part of Amr Musa's memoirs, this time bearing the name “The Years of the Arab League,” and narrating details about the scenes of the preceding era. Moussa assumed the secretariat of the university, as was the endeavor of the former secretary Ismat Abdel-Majid to extend his seat had it not been for the interference of the late Egyptian President Hosni Mubarak, who sent him a letter in which he told him: "Oh man, that is enough."

This part also narrates the American coldness towards the Arab Peace Initiative, and the dream of the late leader of the Sudan People's Liberation Movement, John Garang, to assume the presidency of all of Sudan, and the exclusion of the late Libyan leader, Colonel Muammar Gaddafi, to be a victim of the Arab Spring, but the most important part that the episodes dealt with was related to Musa's testimony in the war crisis Over Iraq.

The notes indicated Amr Moussa’s emotion in the face of Saddam Hussein, and his saying to him, “Listen, stay, Mr. President, theorizing will not benefit Iraq and it will not benefit you, frankly.

Are you aware that your country is exposed to this imminent danger? ”

The notes in this incident were based on an audio and written narration attributed to the Assistant Secretary-General of the Arab League at the time, Ahmed bin Helli, who died years ago, and Musa reaffirmed this percentage again after the attack on the notes, noting that he did not rely on this story on His memory, but on another party who was present at the incident.

The recordings attributed to Laban Hali also included Saddam's saying to Musa interrupting: "Doctor," Moussa replied angrily, "I am not a doctor. I tell you, Mr. President, Iraq is in danger, respond to what we are asking you."

This testimony angered former Iraqi Foreign Minister Naji Sabri Al-Hadithi, who issued a press statement denying the accuracy of this incident as one of its main witnesses, and he also denied other parts of Musa's account related to the details of what happened in Iraq at the time, and Sabri said that “In the notes, Musa said: On his visit to New York, he met the Secretary-General of the United Nations at the time, Kofi Annan, and asked him (a letter to Saddam Hussein to resolve the situation with regard to the international inspectors), and that Annan agreed to his request.

Sabri added, "This means that Musa decided the visit and determined its subject and date."

But the truth, according to Sabri, was that it was - Naji Sabri - who proposed to Musa the idea of ​​visiting Iraq.

Sabri added, "The memos list, according to the style of propaganda and excitement, how Musa went to meet Saddam Hussein, saying that Musa moved from his residence to a military headquarters and then to a military unit headquarters." And he adds, "But all these details lack accuracy." - And the conversation by Naji Sabri - is that «the building of the National Council that witnessed the meeting is not a military barracks as stated in the notes, but rather a large building of a beautiful classic urban style located on the Tigris River, less than 200 meters from the Republican Palace, and includes civilian offices of the Presidency of the Republic It is natural for the building to be protected by an external fence, and for its external entrance gate to be guarded by a few security guards, like any building belonging to the Presidency of the State in any country in the world.

Nagy Sabri said that the notes tell a different version of reality about what happened in the interview with Saddam Hussein. “The notes claimed that Musa became angry and addressed President Saddam in a tone as if it were a cry in his face, and that the President addressed him with the title Doctor ... etc.!

There is no truth to this and to all that was mentioned about the meeting at all ».

Sabri stressed that “what is strange is what was mentioned in the notes about Moses’s anger and his shouting at President Saddam Hussein, and other allegations. How did Brother Amr accept this blatant lie to him who wrote his memoirs?

Thus, he has attributed to the descendants of Egyptian diplomacy with long traditions that contradict the simplest characteristics of a successful diplomat, that is, civility, politeness and good speech.

And he attributed to him words that contradict the diplomatic alpha, which requires that the negotiating diplomat enjoy, in addition to the above, good behavior, wisdom, calm, control of emotions and avoid emotion and anger.

Nagy Sabri also said: “How do the memos say that Mr. President has approved the return of the inspectors and authorized Amr Moussa to speak on behalf of Iraq?

Is there a country in the world that authorizes a person other than its citizens who does not reside in it and does not occupy an official position with it to represent it in relations with states and international organizations? ».

On the other hand, and on the same day, Amr Moussa issued a press statement in response to Naji Sabri's statement, in which he said, “When I decided to publish my memoirs from which two books have been issued so far, I committed myself to the necessity that any narrative of political facts be based on official sources and conclusive evidence, and that it be A clear separation between personal impression and analysis on the one hand, and proven facts on the other side, and that these notes conclude in their loyalty to the truth and the national interest and not to any other consideration.

The press release adds, "Perhaps these commitments were a major reason for which I was keen to obtain assistance from a professional journalist, Professor Khaled Abu Bakr, not only to edit the articles of the memos, but also to strive to document their facts from their original sources as appropriate."

Moussa explained that the facts that Mr. Naji targeted in his commentary and related to his interview, when he occupied the position of Secretary-General of the League of Arab States, the late Iraqi President Saddam Hussein in Baghdad on March 19, 2002, were not responded by rote or attempt to remember what happened about 18 years ago, but they were recorded. It was also recorded in the minutes of the official meeting at the Arab League, in which the book’s editor, Mr. Khaled Abu Bakr, obtained a copy of it from Ambassador Ahmed Bin Helli, Assistant Secretary-General of the Arab League in 2016, a year before he met his Lord.

Moussa also says in his statement, “Since the official record used abstract technical language to describe what happened during the visit and the atmosphere that cast its shadow over it, the editor also obtained an audio recording from Ambassador Ahmed Bin Hali, in which he described the atmosphere of the interview and the tone in which she spoke with the Iraqi president. And some other details that were not mentioned in the meeting minutes.

Moussa concluded his statement by saying, “I do not find any harm in respecting the idea of ​​personal loyalty to leaders, and I greatly appreciate those who show loyalty to an idea, principle, or leader, even if they disagree with those orientations.

The decades I spent in public work, politics and diplomacy earned me the ability to understand the effect of personal loyalty and political upbringing on the perceptions and stances of some diplomats.

It is worth noting that Arab newspapers and websites dealt with the episodes with widespread admiration and criticism, and brought back to the scene the discussion of various political stations that passed through the Arab arena.

Arab newspapers and websites dealt with the episodes with widespread admiration and criticism, and brought back to the scene the discussion of various political stations that passed through the Arab arena.

Sabri stressed that "what is strange is what was mentioned in the notes about Musa's anger and his shouting at President Saddam Hussein, and other allegations, so how did Brother Amr accept this blatant lie to him who wrote his memoirs?"

The notes indicated Amr Moussa's emotion in the face of Saddam Hussein, and his saying to him, "Listen, stay, Mr. President, theorizing will not benefit Iraq, and frankly it will not benefit you."

Are you aware that your country is exposed to this imminent danger? ”

The notes in this incident were based on an audio and written narration attributed to the Assistant Secretary-General of the Arab League at the time, Ahmed bin Hali.