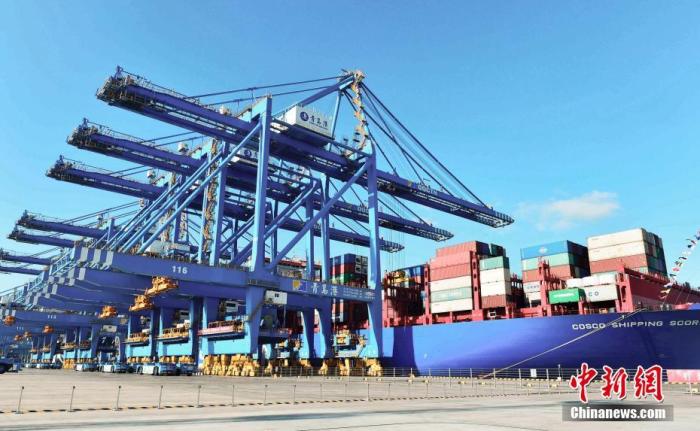 China News Service, Beijing, December 18 (Reporter Wang Enbo) As the Central Economic Work Conference concluded in Beijing on the 18th, the focus of China's economic work in 2021 has also surfaced.

The only major economy in the world that has achieved positive economic growth, has made decisive achievements in the three tough battles, has made significant progress in scientific and technological innovation, has achieved important breakthroughs in reform and opening up, and has effectively guaranteed people’s livelihood... This year, facing the severe and complex international situation, arduous and onerous The task of domestic reform, development and stability, especially the severe impact of the new crown pneumonia epidemic, has given the Chinese economy a response sheet that is satisfactory to the people and attracts worldwide attention and can be recorded in history.

As 2021 is approaching, in the face of changes in the epidemic and many uncertainties in the external environment, the Central Economic Work Conference for the tenth consecutive year has set "seeking progress while maintaining stability" as the general tone of economic work in the coming year.

Experts interviewed by a reporter from China News Agency believe that although "seeking progress while maintaining stability" has not changed, there are more detailed considerations behind these four characters in complex situations.

Wen Bin, chief researcher of China Minsheng Bank, said that the current Chinese economy has undergone two major changes from the inside out: on the one hand, the impact and impact of the epidemic, and some of the risks it may derive, have brought great uncertainty to the Chinese economy; On the other hand, the introduction of the concept of the new development pattern means that the development stage of China's economy is also different from the past.

All this requires all economic work to continue to insist on progress while maintaining stability to keep the economic operation stable.

"Next year, China’s economy will continue to be driven by storms." Jia Jinjing, assistant dean of the Chongyang Institute of Finance at Renmin University of China, pointed out that some countries have adopted some radical stimulus policies in response to the epidemic this year. How these policies will go next year and what impact they will have on the world has not yet been Knowable.

In this context, the eight key tasks proposed by the conference for next year's economic work have attracted much attention.

They are: strengthening the national strategic scientific and technological power, enhancing the independent controllability of the industrial chain supply chain, adhering to the strategic basis of expanding domestic demand, comprehensively promoting reform and opening up, solving the problems of seeds and arable land, strengthening anti-monopoly and preventing the disorderly expansion of capital, and solve it. Prominent problems in housing in big cities, do a good job in carbon peaking and carbon neutrality.

In the opinion of the interviewed experts, the above tasks involve many aspects, but they all directly refer to the key links in China's economic and social development.

In response to the insistence on expanding domestic demand, Cheng Shi, chief economist of ICBC International, believes that China’s greater emphasis on demand-side management is expected to have two long-term effects: for the internal cycle, China’s domestic demand in 2035 is expected to double and strengthen The endogenous growth momentum of China's economy; for the external cycle, China will upgrade from a global "supply" center to a global "supply-demand" dual center, thereby reshaping the global economic and trade system more proactively and flexibly, and fundamentally preventing external risk.

Wang Xiaosong, a researcher at the National Institute of Development and Strategy at Renmin University of China and a professor at the School of Economics, observed that this "mission book" also covers environmental protection and real estate and other goals that are closely related to common people’s sense of identity and happiness, which reflects China After economic development reaches a certain level, more attention is paid to improving the quality of development and protecting people's livelihood.

To complete this series of key tasks, how will policies in various fields "assist"?

The meeting gave the direction: next year's macro policy should maintain continuity, stability and sustainability.

Wen Bin said that under the background that the foundation of China's economic recovery is not yet solid, macro-control must continue to increase support for the real economy, the fiscal aspect must maintain a proactive fiscal policy, and the monetary policy needs to be flexible, accurate, and reasonable on a stable basis. Appropriately, the growth rate of broad money M2 and social financing is basically in line with the growth rate of nominal GDP. This will keep the overall macro leverage ratio stable and avoid further increases in financial risks.

Wang Xiaosong reminded that next year China’s economy must consider the overall national conditions when setting development goals, and local governments must closely follow their actual conditions in the specific implementation process, so as to formulate practical and feasible strategies and policies.

"Only by making steady progress throughout, can we avoid sharp turns." (End)