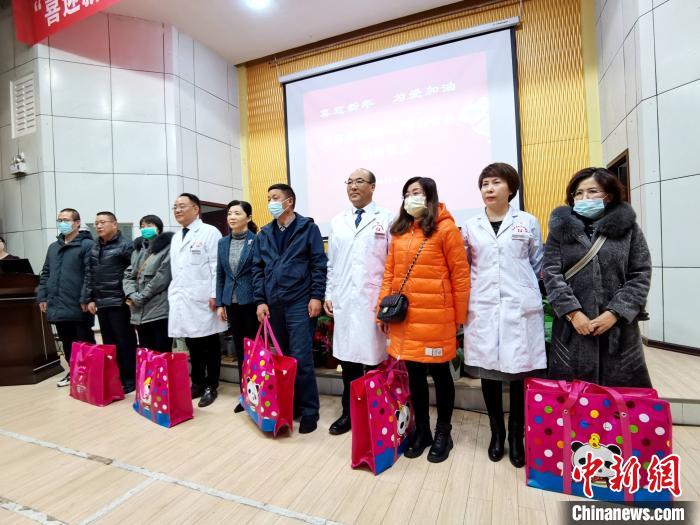 Relevant people said that the whole society should pay attention to such rare diseases and reduce the incidence of birth defects.

Phenylketonuria is a reduction or functional defect of phenylalanine hydroxylase in the human liver. Phenylalanine and its metabolites accumulate in the body, harm the nervous system, and eventually lead to a decline in intelligence or even developmental arrest.

If it is well controlled, it will generally not affect the development of the nervous system and natural life span.

The picture shows a special food donation for phenylketonuria.

According to Xu Faliang, deputy director of the Qinghai Newborn Disease Screening Center, epidemiological surveys have shown that the incidence of neonatal phenylketonuria in Qinghai, Tibet and other provinces is much higher than the national average.

Xu Faliang said that the life-long diet plan for each child with phenylketonuria should be formulated in detail, such as the specific recommended intake of phenylalanine and protein for different age groups, nutritional management priorities, follow-up and evaluation content, etc.

"If my daughter goes to school normally, she will be in the fourth grade. But in the first semester of the third grade, she couldn't hold on to a class for 40 minutes. She was emotional and vented her temper." Shanshan (pseudonym) of Guide County, Hainan Tibetan Autonomous Prefecture, Qinghai Province, said A reporter from Chinanews.com said.

Shanshan introduced that afterwards, the family took the children around for inspections, but there was no result.

After seeing his daughter's hair color, a patient suggested to the Qinghai Provincial Neonatal Disease Screening Center for a phenylketonuria test. He was diagnosed with phenylketonuria this year.

Emotional abnormalities, coupled with harsh dietary conditions, forced Shanshan's daughter to interrupt her studies while Shanshan herself takes care of her daughter full-time.

Shanshan said that after a period of controlled diet therapy, her daughter is now in a stable mood. “If you can return to school next year, try to get her back to school.”

"Phenylketonuria is slow in onset and slow in recovery. It is not a matter of one day or two." Shanshan said, "I hope that the whole society will pay attention to phenylketonuria and get more help. With everyone's help, we will definitely not Will give up."

Zhao Chengmao, Dean of Qinghai Maternity and Child Health Care Hospital, introduced that including the Shanshan family, 131 Qinghai province household registration applicants from Xining City, Haidong City, Guoluo Prefecture, Yushu Prefecture, Hainan Prefecture, Haibei Prefecture, and Haixi Prefecture in Qinghai Province Children with phenylketonuria are assisted by the above items according to their age and compliance.

"In November, our medical experts visited the home of phenylketonuria families in Guide County, Qinghai Province. They witnessed the maternal love with their own eyes and proved that'women are weak, but mothers are strong'." Qinghai Maternal and Child Health Hospital Party Secretary Ang Qing Cai Dan said, “The mother of the patient has given extra care for the health of the child. The family can be vegetarian and can rent a house near the child to make special meals.”

Ang Qing Caidan said that while implementing the phenylketonuria relief project in poverty-stricken areas of Qinghai Province, the hospital has brainstormed for the welfare of the children, and through various projects, the burden on the families of the children will be reduced to the greatest extent. Focus on medical examinations, pre-pregnancy health check-ups, maternal health care and screening of newborn diseases, strengthen the management of high-risk children, and strive to help more children with phenylketonuria in poverty-stricken areas."