After the resignation of Michèle Rubirola, who will become mayor of Marseille?

A time decried, the socialist Benoît Payan, first deputy of Michèle Rubirola, is in a good place to occupy the place of the latter, but must also ensure the support of Samia Ghali 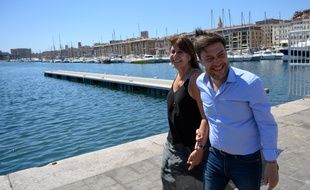 Benoît Payan and Michèle Rubirola on the Old Port -

If we are to believe Michèle Rubirola's speech, it's not much: a simple question of reversal, a small smooth move.

The mayor of Marseille would go to the office opposite her, a few meters away, the one reserved for the first deputy, while her first deputy, the socialist Benoît Payan, would move to this mythical little room in the right wing of the town hall. , which has long been the temple of Jean-Claude Gaudin.

In short, a few meters separate them and nothing else, according to the ecologist.

"We are a duo and I hope that our duo continues but is reversed and that Benoît becomes mayor", launches Michèle Rubirola in front of the press, after announcing his upcoming resignation.

“We form a collective with the Marseille Spring and it is this collective that our city has chosen.

She chose a project more than a face.

But some distances, even the shortest such as those which separate the Marseille mayor's office from that of the first deputy, can in reality look like an abyss.

The leader of the socialist opposition under Jean-Claude Gaudin was notably accused of being an apparatchik of the PS.

"Refusing to serve as a pretext for division", the forty-something had then given up running for the head of the list of this movement, leaving his place to the ecologist and novice in politics Michèle Rubirola, whose candidacy had achieved consensus.

But that was before.

The historic pillars of the Marseille Spring assure it: Benoît Payan can now count on the support of the 44 elected members of the movement.

"During the period of absence of Michèle linked to these health problems, we were able to get a glimpse of what could be the management exercised by Benoît," said Olivia Fortin, fourth assistant and one of the linchpins of the Marseille Spring.

Benoît Payan is right at the heart of the issues, since from the start, they have worked together, hand in hand, for all the decisions that are taken.

We have complete confidence and we find him all legitimacy for this role tomorrow.

Indeed, the first deputy, whose large delegations left him the hand on strategic files, found himself in September last acting mayor during the convalescence of Michèle Rubirola, all in full health crisis.

An unforeseen event that had allowed Benoît Payan to stand out, by opposing the government which had just announced the closure of bars and restaurants in the major cities of France including Marseille.

But there is still a long way to go to the mayor's office for Benoît Payan.

The Marseille Spring still enjoys a relative majority and needs, as during the crazy election of Michèle Rubirola at the head of Marseille last July, the support of Samia Ghali to be able to access the supreme office.

However, the feuds between Benoît Payan and the elected representative of the northern districts are an open secret for anyone who follows Marseille politics for a while.

"For the moment, I reserve my statement," she said as the only response.

"Will she replay the July 4th game for us?"

I hope she will take her responsibilities.

We will continue to act in the interest of the people of Marseilles and Marseillais.

The official election of the new mayor of Marseille and all the deputies will take place this Monday at the end of a city council dedicated to this subject.

Marseille: The opposition wonders about the future of Michèle Rubirola and denounces "a political grub"