UAE welcomes removal of Sudan from the "terrorism list"

The UAE welcomed the decision of the United States of America to remove the name of the Republic of Sudan from the American list of states sponsoring terrorism, and the Ministry of Foreign Affairs and International Cooperation, in a statement, congratulated Sudan and its brotherly people for this step that ends years of political isolation and 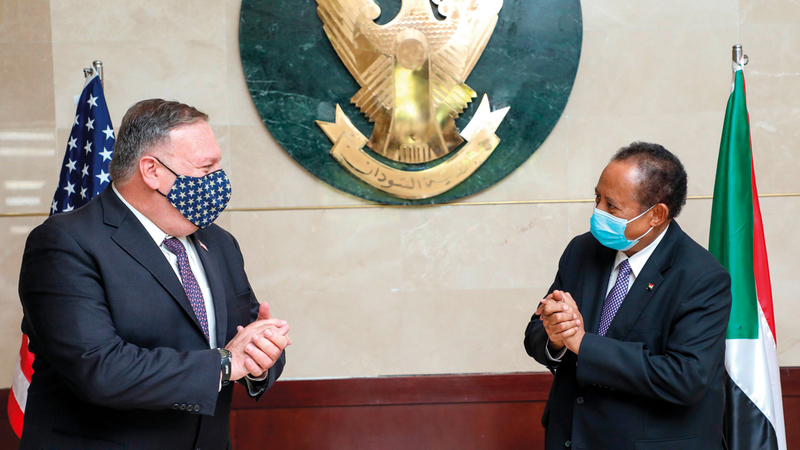 She stressed that the move ends the political and economic isolation

UAE welcomes removal of Sudan from the "terrorism list"

During a previous meeting between Pompeo and Hamdok.

The UAE welcomed the decision of the United States of America to remove the name of the Republic of Sudan from the American list of states sponsoring terrorism. Enhancing Sudan's security, stability and prosperity, in a way that achieves the aspirations and hopes of its people for development, prosperity and stability.

Yesterday, the United States officially raised the name of the State of Sudan from its list of states sponsoring terrorism, which it was included in in 1993, and the US embassy in Khartoum said, on its Facebook page: “With the expiration of the 45-day notice to Congress, Secretary of State Mike Pompeo signed a communiqué canceling Sudan's designation as a state sponsor of terrorism.

The measure will enter into force on December 14, the date on which it will be included in the Official Gazette.

US Secretary of State Mike Pompeo praised what he described as a "radical shift" in relations with Sudan, and Pompeo said, in a statement, that "canceling Sudan's designation as a state sponsor of terrorism represents a radical shift in our bilateral relations towards more cooperation and support for Sudan's historic transition to Sudan." Democracy ».

The head of the Sudanese Transitional Sovereignty Council, Abdel Fattah al-Burhan, described the decision as “historic.” And he said in a tweet on the social networking site “Twitter”: “Thanks to the brothers, friends and regional and international partners who supported Sudan, thanks to the US administration for making the historic decision to wipe my country off List of countries sponsoring terrorism, this decision will contribute to supporting the democratic transition, and enhance the chances of success of the transitional period, and the well-being of the Sudanese people.

He continued: "Greetings and congratulations to the Sudanese people on the occasion of Sudan's exit from the list of states sponsoring terrorism. This great work is the result of an effort made by the people of my country, and it was carried out in the same complementary spirit to the masses of the popular and official December revolution."

For his part, the Prime Minister, Abdullah Hamdok, congratulated the Sudanese on the exit of the name of Sudan "from the list of countries that sponsor terrorism, and Sudan's emancipation from the international and global blockade," in which he said that the behavior of the ousted regime had forced Sudan into it.

Hamdok said in a tweet on Twitter: “This achievement, for which the transitional government has worked since its first day, contributes to reforming the economy, attracting investments and remittances from our citizens abroad through official channels, and creating new job opportunities for young people.”

The United States included Sudan on this list, after accusing former Sudanese President Omar Al-Bashir of having links with terrorist organizations, including Al-Qaeda, whose founder and former leader, Osama bin Laden, resided in Sudan between 1992 and 1996.

The listing prevented foreign countries from investing in Sudan and establishing commercial relations with them under penalty of imposing sanctions.