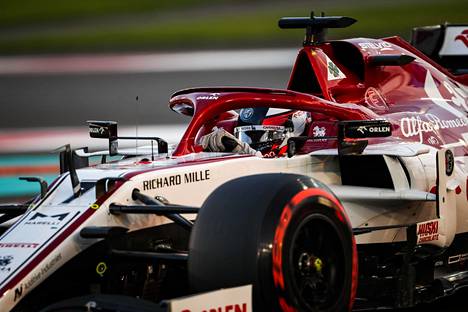 The IS jury will go through the events of the Abu Dhabi race, which ended the F1 season.

This time, Juha Kanerva, Tommi Koivunen and Joonas Kuisma will pass their judgments.

In Abu Dhabi, the victory was celebrated by Red Bull’s Max Verstappen ahead of Mercedes ’Valtteri Bota and Lewis Hamilton.

Star: Max Verstappen drove to a majestic victory when Lewis Hamilton, who secured the world championship, did not pedal all the way to the bottom in the crown aftertaste.

The track seemed suitable for Red Bull, as Alexander Albon was only one and a half seconds behind Hamilton.

Usually he’s not that close at the start either.

Topic: In Finnish, the place of Valtteri Bottas' screen in the wake of the dusting offered by the previous race and the young challenger George Russell.

In the evening race, Nastola’s big son showed that at least the nerve holds, even though there was no point in winning.

Bottas is probably Mersu’s second driver next year as well, though Russell is knocking on the back wing.

Moka: Ferrari changes drivers and team managers, but who would wake the man deciding the race tactics from his nap?

On Sunday we went to change tires again at a strange moment.

Next season then with better planning.

Scalp: Kimi Räikkönen, who won the World Championship title at the wheel of a Ferrari 13 years ago, showed the red devils a long nose by driving Alfa Romeo in front of both Maranello drivers.

Already in practice, the Finn showed an attitude by turning off his car on fire and repairing it with the mechanics late into the night.

The road cyclist has to incubate his feet in plastic shoes, so the open leather sandals certainly felt as fresh as the beloved’s second place in the race.

Star: Pole position, lead from start to finish and victory.

Old teammate Daniel Ricciardo took the fastest lap at the end, but Max Verstappen went on a winter holiday with a knockout.

The Dutchman drives hard and eats his teammate on that side.

Topic: Continuation of the previous one: this is now the case for Alexander Albon, who lost the time trials of the season to Verstappen 0-17.

According to rumor rumors, Albon is leaving the job at the same time and will be replaced by Sergio Perez.

When completed, the transfer is a fine and fair reward for Perez for his hard work and, on the other hand, a pity for Albon, who has been in a very awkward place.

Moka: Money matters and the setting in Abu Dhabi is impressive, but somehow one would like to see the last race of the season run on a track that would provide more entertaining races.

Even in an exceptional year, the races would have turned so much that Sakhir’s short outer perimeter version would have culminated the season with its specialty.

Scalp: Not everything money matters.

It was shown by Esteban Ocon, who grew up living part of his youth in a caravan when the family house was sold to finance a driving hobby.

Ocon took Lance Stroll's scalp in the final round.

Stroll’s F1 career is built on the assets of billionaire father Lawrence Stroll.

Surprise: I was waiting for Mercedes to take the front row and a double win, I got a Verstappen show.

Apparently Mersu was already calculating engine power - and I guess it makes sense that Perez's Mersu mill from Racing Point rotted for the second time in three weeks.

Star: Kimi Räikkönen hung Charles Leclerc after the round trip and left the Ferraris behind in the final results.

Räikkönen, who showed his taillights for the future of the F1 series, was reminded of the priest figures weaving Kummel's fists.

However, the trend is worrying: Räikkönen's performance level decreased towards the end of the season.

If you drove, it's a shame.

The 30-year-old Mexican brought color to the 2020 season.

Rumors are taking Perez to Red Bull to replace Alexander Albon, so hopefully “Checo’s” extracts will be enjoyed next season as well.

Moka: The great season ended with a boring race on the anesthetic Yas Marina track.

The exception year has seen fantastic races: in Portimao, Mugello and on the outer perimeter of Sakhir.

Abu Dhabi has now been driven six times in a row from pole position to victory.

When the square is enough for a roller coaster, the carousel is no longer of interest.

Scalp: McLaren rose to third in the manufacturers ’World Series past Racing Point.

The investment will have significant positive financial effects.

McLaren’s journey in the hybrid era has been bleak, but the legendary stable has returned to the forefront.

What will Daniel Ricciardo get out of the car next year?

Surprise: Lewis Hamilton has shown that he wins the F1 race, even if any of the plagues of the Bible are put forward.

Although Hamilton had just fallen ill with the corona, somehow it was thought that the British would rise to the highest podium again.

The virus makes even the grandmaster weak.