Pirlo's team wins against the Rossoblu with two CR7 penalties in the final. After the advantage signed by the Argentine n.10, momentary equal to Sturaro&nbsp; &nbsp; 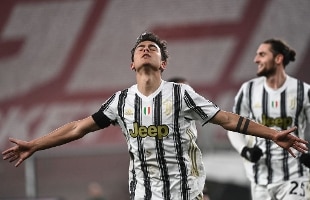 13 December 2020Reduce from the feat at the Camp Nou with Barcelona, ​​Juventus does not stop: in Marassi defeated Genoa (1-3), bianconeri third with Napoli at -3 from Milan.

The rossoblùs remain in the rear with only 6 points in the standings.

Maran recovers Perin between the posts, in front of the former Pjaca with Scamacca;

Pirlo keeps Kulusesvki on the bench, Dybala-Ronaldo attacking tandem with Chiesa on the left wing.

Juve immediately in the Genoa half, but there are no great opportunities in the first half (the best at 18 'is on Bentancur's feet who free, from the edge, does not frame the goal).

Genoa suffers and does not make the most of a couple of restarts.

In the second half, Juve always commands, who seem more determined, the game unlocks: 57 ', McKennie's head assist for Dybala who controls and with a left footed over Perin.

No, the unexpected happens: Genoa, hitherto non-existent in attack, finds the same with the former Sturaro (61 '), very well caught by a cross by Luca Pellegrini.

Pirlo puts Morata in for Rabiot, pulls out the trident to win the race.

At 72 'Perin instinctively saves on a header from Ronaldo, at 78' Juve takes the lead: Rovella spreads Cuadrado, CR7 scores from the spot.

At 89 'another penalty, this time due to a foul by Perin on Morata: Ronaldo infallible, overtaken Ibrahimovic in the top scorer with 11 goals.