Max Verstappen wins the Abu Dhabi GP, the last round of the 2020 Formula One season. After pole, the Red Bull driver, on his tenth career victory in the circus, 42nd podium, dominates the race from the first to the last lap in front of the Mercedes of Valtteri Bottas and world champion Lewis Hamilton. At the foot of the podium the other Red Bull, the one driven by Alexander Albon 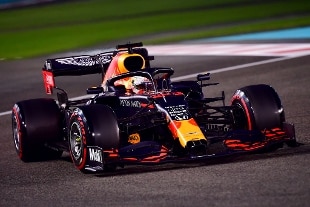 13 December 2020The last GP of the troubled F1 season in Abu Dhabi goes to Max Verstappen in Red Bull ahead of Bottas and Hamilton's Mercedes.

The two Ferraris closed the World Championship with a humiliating dubbing.

Verstappen defends the pole in front of Bottas and Hamilton.

Then Norris, Albon and Sainz.

Leclerc, relegated by three places, starts thirteenth behind his fellow Ferrari Vettel in the last appearance in the Maranello car.

The first laps live from the duel between Norris' McLaren and Albon's Red Bull.

Hamilton looks rather sly and rides calmly to third place.

On the tenth lap game over for Perez abandoned by the engine of his Racing Point.

Norris can't keep up the pace and is overtaken by Albon and Ricciardo's Renault.

The two Ferraris do not change tires and go back to seventh and eighth with Vettel and Leclerc but on lap 14 the Monegasque is put on by Sainz.

On lap 23 Pit stop for Leclerc who returns to last place and on lap 32 the time for track limits at turn 21 is taken away. Vettel meanwhile navigates in ninth position overtaken by Gasly but must return for the tire change on lap 36 and returns in 15th position.

In the top positions Verstappen rides with a good margin in the Mercedes that seem inexplicably subdued even if from the wall they say that everything is ok for Hamilton from the point of view of performance.

Leclerc in the rear is kept at bay by Raikkonen's Alfa.

Some thrills for Verstappen who registers suspicious vibrations on his car, which does not prevent him from rounding the Ferraris.

To animate the race we think the fight between Norris, Sainz and Ricciardo behind the leading quartet.

The first three remain enclosed in 12 ”.

With six laps to go Bottas begins to slow down and is targeted by Hamilton and Albon.

Leclerc continues to embark on the curves and to see Raikkonen's exhausts.

After the moment of uncertainty, Verstappen continues to stretch on the Mercedes.

The final three laps see Albon chasing Hamilton who continues to be incredibly below his own standards.

The world champion, perhaps not yet 100 percent after Covid, still manages to keep third place.

For the two Ferraris a sad 13th place for Leclerc and 14th for Vettel.