On the opening day, the British prime minister, who is hosting a climate summit with the UN, said the country would not take climate action because of “eco-freaks eating mung beans” but because of the green jobs of the future. 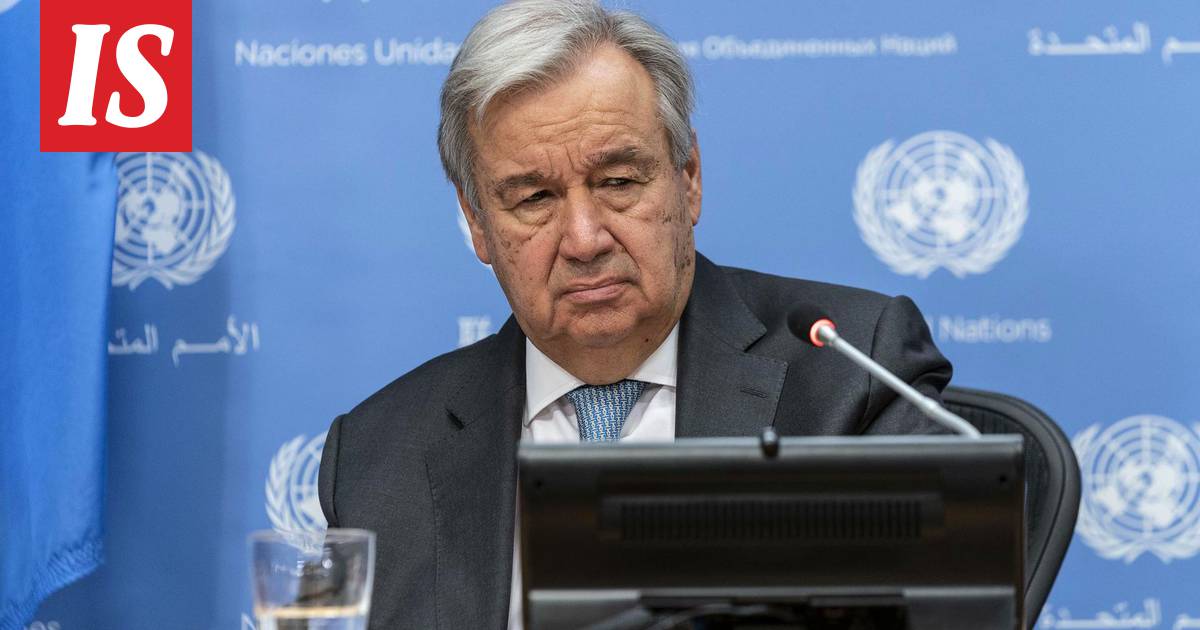 UN Secretary-General Antonio Guterres urges all countries to declare a climate emergency and deliver on their promise to cut their carbon emissions.

“If we don’t change our course, we could be on our way to a catastrophic temperature rise of more than three degrees during this century,” Guterres said.

- That is why today I urge all world leaders to declare a climate emergency in their countries until carbon neutrality is achieved, he continued.

Guterres spoke on Saturday, the opening day of the UN-British global climate summit.

The Secretary-General also expressed concern about the failure of all countries in the world to carry out their corona recovery efforts in a green way.

According to Guterres, the G20 countries have spent significantly more money on fossil fuel-related sectors than on low-carbon energy in their stimulus packages.

According to Guterres, this is unacceptable.

According to him, stimulus resources cannot promote policies that burden future generations, leaving them with huge debts in a "broken world."

Guterres also called on countries that have announced targets for net carbon emissions to keep their promises and increase emissions cuts in line with science.

- Every country, city, economic institution and company needs to adopt plans to achieve net CO2 emissions by 2050 - and start implementing them now, he added and also called for clear short-term goals.

Finland was represented at the virtual summit on Saturday by Prime Minister Sanna Marin (sd).

On the opening day, Marin opened Finland's climate plans in his own close video speech, which include achieving carbon neutrality by 2035 and net carbon emissions shortly thereafter.

Johnson told the meeting that the traumatic pandemic year would end with hopes for the arrival of vaccines.

“Together, we can use scientific progress to protect our planet, our biosphere, from a challenge that is much worse and more destructive than a coronavirus pandemic,” Johnson said.

According to Johnson, Britain is not working for the climate because the country is full of “eco-freaks eating mung beans,” but because scientific advances would allow the creation of millions of green jobs.

According to the news agency AFP, speeches were distributed to countries that have submitted the most ambitious plans of all to advance the promises made in Paris.

A foundation for a looming meeting a year away

The meeting, which began today, paves the way for a climate summit in Glasgow in November a year later, which had to be postponed due to the corona pandemic.

The climate agreement reached in Paris on 12 December 2015 set the goal of limiting global warming to less than 2 degrees Celsius, with the aim of warming by only 1.5 degrees.

With the climate action promises to date, the planet has been heading towards three degrees of warming.

This year, however, new promises of carbon neutrality have been heard from China and Japan, among others, which has brought the two-degree targets closer.

According to Environment Minister Krista Mikkonen (Green), the world has changed considerably in the five years since the Treaty of Paris, but not enough.

- Long-term goals should now be turned into short-term climate measures, Mikkonen said at the Ministry of the Environment's webinar yesterday.

According to Mikkonen, the impact of the corona pandemic on the reduction of emissions will remain short-lived if the economic recovery measures for the aftermath of the pandemic are not in line with climate goals.

Mikkonen expects harnessing the revitalization to be a central theme of the virtual meeting.

Emission reductions caused by a pandemic are transient

In a report yesterday, an international team of researchers from the Global Carbon Project estimated that man-made carbon emissions will be reduced by seven percent this year compared to the previous year due to coronavirus restrictions.

According to Petteri Taalas, Secretary General of the World Meteorological Organization (WMO), carbon dioxide is so long-lasting that a one-year drop in emissions caused by a corona pandemic will not interrupt the increase in carbon dioxide in the atmosphere.

- We should get such emission reductions from year to year, Taalas said at Friday's webinar.

Emissions from China, which has been profiled as a positive player in international climate policy, have increased over the past 30 years and will continue to do so, while emissions have fallen in the United States and the EU, for example.

- In the United States, the reduction in emissions per capita (per capita) has actually been quite impressive.

In other words, despite Trump's administration, positive things have happened there, Taalas reminds.

Joe Biden, who will be the next president of the United States, has promised to bring the country back to the Paris Climate Agreement, from which the resignation took effect just over a month ago.