In Helsinki, the residents of the Lauttasaari senior home are recovering from grief.From five nursing homes in different parts of Finland, IS investigated how the coronavirus has entered nursing homes. It turned out that often the infection comes from an asymptomatic visitor or caregiver. - The going is wild, but we have a skilled and efficient team here. That's what Susanna Pirttiaho says. He is the service director of Valona Elderly Services in Pieksämäki. In the unit of enha 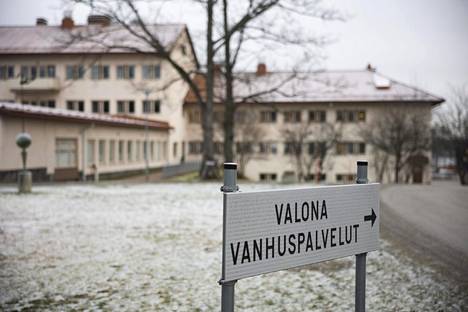 From five nursing homes in different parts of Finland, IS investigated how the coronavirus has entered nursing homes.

It turned out that often the infection comes from an asymptomatic visitor or caregiver.

- The going is wild, but we have a skilled and efficient team here.

He is the service director of Valona Elderly Services in Pieksämäki.

In the unit of enhanced service housing, coronavirus infection has been diagnosed in 16 residents and 23 employees.

The numbers are alive as tests are done frequently.

- This is like a state of war or a catastrophe, Pirttiaho says.

In total, the elderly services have 65 places for enhanced service housing and the staff is slightly over 40.

On Wednesday, the city of Pieksämäki established a home hospital on one floor of Valona.

- We are a care unit, and we should have practically become a medical care unit in one night, Pirttiaho says.

He wants a thorough analysis to be done when the most acute situation eases a bit.

It now appears that Korona was admitted to a nursing home with the asymptomatic plaintiff.

In the light of the Elderly Services housing service unit in Pieksämäki, the situation is serious.

The corona spread rapidly among residents and staff.

The situation is annoying to Pirttiaho, because everything possible has been done.

Money has been charged for protective equipment.

Nurses have been told to stay home since March if there is any pain.

As a result, many deputies have been needed so far.

The city of Pieksämäki is now helping what it can, but where they suddenly get a lot more caregivers.

Pirttiaho to understand the situation of residents, relatives and the nursing staff concerns.

Still, he has one special wish for visitors.

- Every single visit of relatives is a threat to the spread of the disease.

- We regret that we have not been able to respond to the relatives' contacts.

All of our resources have gone to nursing.

In the next few days, we will inform relatives of the telephone number where you can inquire about the situation.

A bulletin from the Essote Pandemic Task Force is attached to the door of the housing service unit for the Elderly Services. Photo: Matias Honkamaa /

Pieksämäki is now in a situation where the Lauttasaari senior house in Helsinki was still a moment ago.

In the senior house, infection was diagnosed in 31 residents and 10 staff members.

The worst is over now, but unfortunately not all the affected residents survived the disease, says Executive Director Saija Toropainen.

He does not say the exact number of deaths for reasons of privacy.

In Lauttasaari, the infective has been found out.

The disease was brought into the house by an asymptomatic superinfector, Toropainen says.

He was not staffed.

- Afterwards, it turned out that he had been asymptomatic for many days, and at the same time he was already infected.

The imprint was sad.

The average age of the residents of the Lauttasaari senior house is 87 years.

They are still in good condition.

Residents make friends with each other and have gone for walks.

Although the corona was protected with utmost precision from March, it still slipped into the house.

- We were unbelievers at first.

This should not have been possible.

We had staggered the meal into three different groups.

Added a lot of safety gaps.

We always disinfect accurately on joint occasions, including the rollators of those who arrived, Toropainen sighs.

In Lauttasaari's senior home, the worst is behind.

At its most serious, there were more than 40 residents and nursing staff sick. Photo: Seppo Solmela / IS

Now that the worst is behind, Toropainen is able to give advice from experience.

He says the disease progressed differently in all 31 affected residents.

In some, the symptoms were mild, in others they were fatal.

- We clearly saw that the worst does not come immediately, but at about the seventh day the symptoms clearly worsen.

Most of us were treated in our own house with the help of doctors.

In the autumn, there was also a corona in Esperi Caren Tilka's private nursing home in Helsinki.

Eper Ketola, Esper's Quality Director, replies by e-mail that Esperi does not provide accurate information on the exposures of residents and staff.

Ketola's estimate is that Korona entered the care home with the asymptomatic plaintiff.

The coronary situation in the City of Helsinki's own care homes is relatively calm, says Seija Meripaasi, Director of Hospital, Rehabilitation and Care Services.

There have been more infections in two nursing homes in November – December, but they have been contained.

In the Kårkulla nursing home in Vaasa, the situation has been calmed down.

After mid-October, it was reported that the Qur’an had been found in almost all residents of the nursing home.

Heikki Kaukoranta, the chief physician of the city of Vaasa, says that Korona was detected when one of the residents came to the hospital for other reasons.

The unit is home to elderly people with intellectual disabilities.

No one died in the crown.

- After the staff was exposed, of course we needed a lot of replacement nurses.

None of these deputy nurses became ill.

They were able to be protected, Kaukoranta says.

- Now that Christmas is approaching, I hope that all visitors will understand the situation, says Pippa Laukka, the chief physician of Viljonkodi in Vihtil. Photo: Pekka Elomaa

In November, the Viljonkoti care home in Kaarikeskus in Vihti was on display, where 11 patients and 7 staff members became infected.

Arc Center has reported that 4 of the patients died of corona.

Viljonkoti is a care unit for patients with memory problems.

In the background of Kaarikeskus is the basic security consortium Karviainen.

Its chief physician Pippa Laukka says that it is not known exactly how Korona got to Viljonkot.

This was despite the fact that Viljonkodi has strictly followed the instructions and rules.

- Now that Christmas is approaching, I hope that all visitors will understand the situation.

Each of us is kind of a lifesaver, Laukka says.